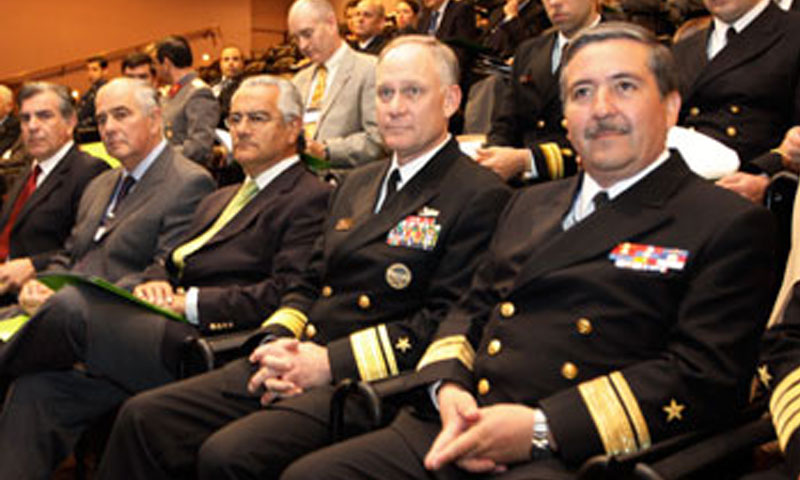 At the request of Chief of Naval Research Admiral Nevin P. Carr, the Naval Postgraduate School Operations Research (OR) Department conducted the first OR Workshop for the Chilean Navy, in Valparaiso.

The main goals of the three-day event were to facilitate exchange between the Chilean and U.S. Navies and introduce high-ranking Chilean military officers and academic and industry experts to the power of operations research to optimize naval decision-making.

“The vision for the workshop, which Admiral Carr sponsored and flew to Chile to kick off in person, came from one of my former NPS students, Chilean Navy Capt. Francisco Hederra Pinto [OR, 1994], who reached back to his alma mater to show his country’s military decision makers the positive impact Operations Research can have on their Navy, said OR Department Chairman Rob Dell. “He felt that this was the right time because many within Chile’s Navy recognize the need to use OR more fully and look to the Naval Postgraduate School’s OR Department for assistance.”

“Professor Dell and his colleagues in the Naval Postgraduate School OR faculty added so much with their participation in the Naval Operations Research workshop,” said Hederra Pinto, who heads the Chilean Navy’s Programs, Research and Development Directorate, Systems Analysis and Operations Research Departments. “They enabled me to show our Navy and defense related researchers and authorities what can be achieved with good OR in the Department of Defense. The quality and applicability of every presentation was outstanding, and everyone in the audience left with the feeling that OR is an area where they can find answers to their problems.”

“For NPS, this workshop was a way to highlight in a captivating way the cutting edge work we’re doing in military relevant OR,” noted Dell, who spent a sabbatical year in the South American nation in 2007-2008. “It went extremely well and accomplished all of its goals,” he said. “All the reports we’ve received from Chilean participants indicate that it was a huge success and surpassed their expectations. Chile’s Admiral Cesar Lopez has already inquired about holding a similar workshop next year, and we also look forward to continuing and developing the relationship.”

“The opening ceremonies were attended by up to 100 mostly military and some civilians, including top academicians from three of Chile’s major universities. The venue was at one of these, the Pontifical Catholic University of Valparaiso, which is starting a Navy focused OR master’s program next year primarily for civilians. We’ve already filled requests by their industrial engineering faculty for course materials and models, and our OR faculty have set up e-mail connectivity between some of the Chilean participants and other NPS faculty.”

“Through conversations with Francisco, we chose a set of topics and expert speakers for the workshop,” Dell noted. “In addition to NPS faculty and Admiral Carr, other participants from the U.S. were Naval Research Laboratory Director Capt. Paul Stewart, Office of Naval Research (ONR) Director of Innovation Dr. Lawrence Schuette, ONR Global’s Director of Technology Dr. Clay Stewart, and the top three directors from ONR Global Americas. 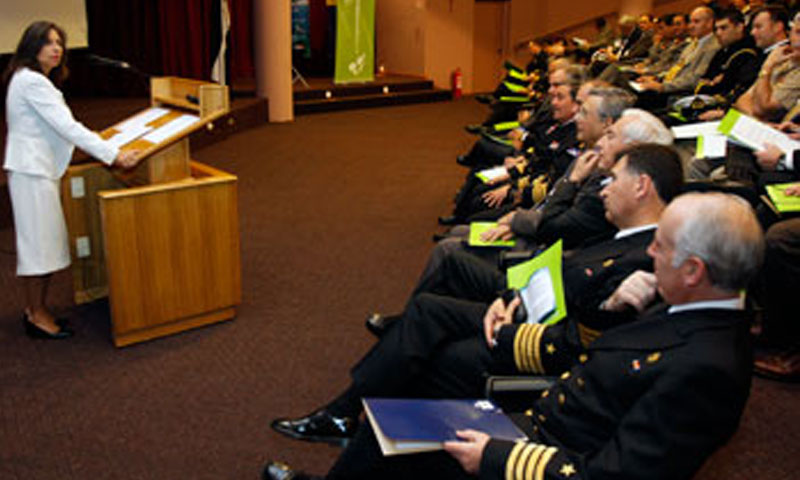 Chilean Under Secretary of the Navy Carolina Echeverria addresses the opening session of the Naval Operations Research Workshop held in Valparaiso, Chile.

“Chile’s importance is highlighted by the fact that ONR Global’s Santiago office is the only one in all of Central and South America,” Dell said.

“The NPS OR talks were the highlight of the workshop and the majority of the presentations,” he noted. “Our faculty gave seven of the 13 talks.”

“Two of the Chilean participants are planning to attend our next SEED Center workshop here in Monterey,” Dell noted. The NPS SEED Center for Data Farming harnesses the power of simulation to address analysis problems.

“We’ve had Chilean students for years here at NPS,” Dell added, “including one currently in the OR master’s program. The Chilean Navy is very satisfied with our graduates and intends to keep sending us students.”