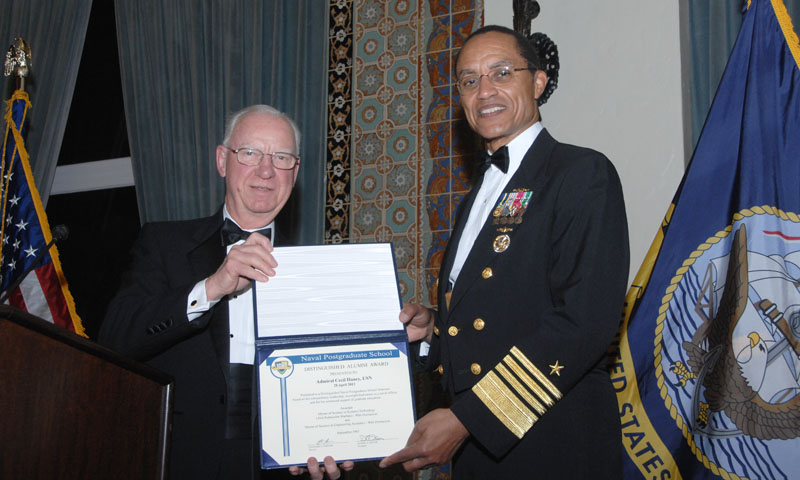 Adm. Cecil Haney visited the NPS campus to view graduate students’ research projects, meet with students from the international community, and attend the ball celebrating the 112th anniversary of the submarine force. Recognized for his extraordinary leadership, accomplished career as a naval officer and for his continued support of graduate education, Haney was presented a certificate and named a distinguished alumnus by retired Rear Adm. Jerry Ellis, Chair of NPS’ Undersea Warfare program.

“I have known Admiral Haney for many years and have worked with him in several assignments. He is a superb naval officer known for his quiet and reserved manner and his thoughtful and thorough analysis of issues,” said Ellis. “Clearly, he is the right man to lead our great Pacific Fleet.”

“Too often today we read headlines that question whether America is in decline,” Haney continued. “Just look at the talent in this ballroom tonight. I see before me a room of submariners who value education and are once again attending class to further their education goals and the principles of Admiral Hyman G. Rickover.”

Noting Admiral Rickover’s tremendous contributions to the birth of applied nuclear technology in the Navy, Haney outlined the birth of the nuclear submarine to guests in attendance.

“The vision of an eccentric Navy Captain by the name of Hyman Rickover would forever change the way we do business in our submarine community,” Haney said. “Sixty years ago this June, the keel was laid for the submarine that would realize Rickover’s vision of powering a submarine by splitting the atom. That boat was called the Nautilus.”

He continued by connecting the work of NPS students, and the principles that Rickover demanded from those that served in the Navy’s nuclear energy corps.

“Today, I spent my morning amazed by some of the outstanding research being conducted here,” noted Haney. “I look at the talent of the folks in the audience here and the men and women of the submarine force that serve in the Pacific Fleet. I see talent, enthusiasm, hard work, questioning attitudes getting the business right for our country; carrying out the Rickover principles day in and day out.”

Haney, a 1987 graduate, earned Master of Science degrees in Engineering Acoustics and Systems Technology (Anti-Submarine Warfare) from NPS, both with distinction. Noting the impact graduate education at NPS had on his own career, Haney put some perspective on his time at the university.

“I had the pleasure very early in my career to go to the Naval Postgraduate School,” said Haney. “What I really valued from my experience here is being able to advance my critical thinking. My particular discipline, systems technology and acoustic engineering, really got me to advance my education in critical areas that I was able to use as a Submariner for many years beyond graduating from here, and I still do.” 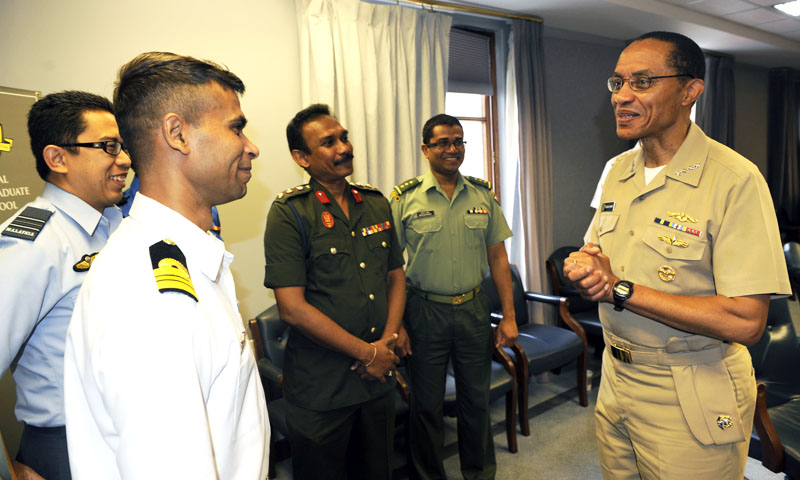 Adm. Cecil Haney meets with international students from the Naval Postgraduate School during a visit to the university campus.

Highlighting the strength of the NPS experience, Haney offered his advice to officers that may be interested in graduate programs at NPS.

“Students of NPS should come prepared to really engage in a very diverse and meaningful curriculum, and to take advantage of each and every educational opportunity,” said Haney. “Those educational opportunities are in the classroom, in the laboratories, and in the interaction with some of the international students that are there. In particular, take advantage of the richness of education that the faculty brings to the table and the ease of access to that faculty to be able to expand our advanced learning and critical thinking.

“As I look at the complexity of the Asia-Pacific Area of Responsibility, and the uncertainty of what I may get a call on in the next hour, in the few days, or in the next week, I realize how important it is to have our military officers come through NPS to advance their critical thinking skills,” he added. “Through advanced learning in a variety of different disciplines, these officers are then able to bring that critical thinking to help in the decision making and calculus. As we go forward in operations we can offer the President, and combatant commanders, with meaningful courses of actions to deal with whatever occurs in this uncertain world of ours.”

Noting his dedication to NPS and the submarine community, Ellis closed by highlighting the significance of Haney’s attendance at the Submarine Ball.

“The fact that he would come here in the early months of being the Fleet Commander and be the guest speaker from the Naval Submarine League’s 112th celebration of the birthday of the United States Submarine Force shows the great respect he has for his submarine community, and for his alma mater, the Naval Postgraduate School. It is truly an honor to have him here,” Ellis said.

In his closing remarks Haney highlighted the impact graduates of NPS have on the Fleet and the Nation.

“By taking what you have learned here at the Naval Postgraduate School and applying it beyond the campus, you will continue to make the Navy better,” Haney noted. “I have confidence that this and future generation of submariners will continue to carry out the legacy of the submarine force and through your efforts will ensure America’s security and prosperity.”