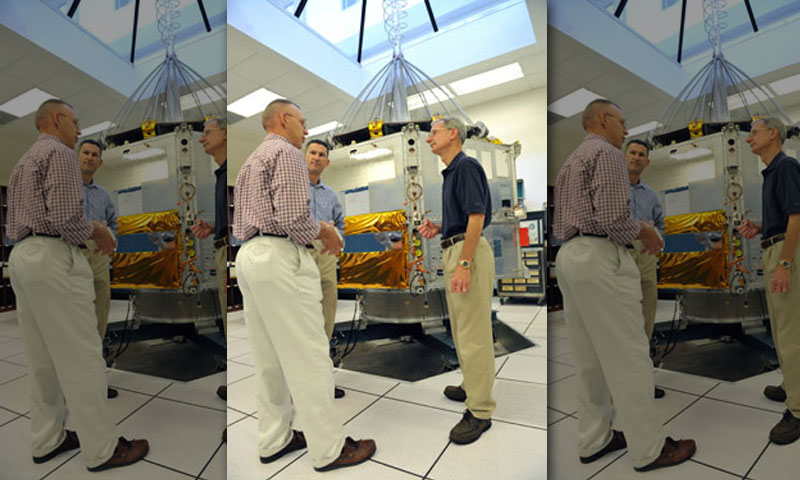 While the Navy is our nation’s seafaring service, it truly operates through every domain, be it sea or land … or space. In fact, over the past few decades, the Navy has played a major role in the development and application of several space systems, providing naval and joint warfighters with a wide range of advanced capabilities in critical areas such as intel, communications and navigation. But perhaps one of the most critical components to the Navy’s efforts in the final frontier is having the people who are educated in the development and operation of these advanced space systems, armed with the knowledge and expertise needed to use them.

“The Navy is hugely dependent on a variety of space systems including the Global Positioning System (GPS), the UHF Follow-On (UFO) satellite communications system, ISR [intelligence, surveillance and reconnaissance] systems developed and operated by the National Reconnaissance Office (NRO) and many others,” said Space Systems Academic Group Senior Lecturer Al Scott. “Consequently, it’s important for the Navy to have people with expertise in the design, development, integration, test, and operation of space systems and especially how to leverage those systems to support the warfighter.”

That’s where the Naval Postgraduate School (NPS) and its Space Systems Academic Group (SSAG) come in, providing the education and expertise to the men and women who will ensure the needs of the Navy are being met in a field traditionally maintained by the Air Force.

“A lot of people are surprised that NPS has a significant space systems program because it’s the Air Force that does most of the satellite building and launching,” noted Scott, “but the Navy developed the program due to the concern that if we don’t have Navy people that are smart in space systems then the Navy’s needs potentially might not be met. That’s really a big part of what our space systems curriculum is about – making sure that we have Navy people who can go out into the fleet knowing what is available from space and how to make the best use of those capabilities.”

In 2008, NPS President Daniel T. Oliver and then Program Executive Officer (PEO) for Space Systems, Rear Admiral Victor See, signed a Memorandum of Agreement (MOA) for PEO Space Systems to sponsor a Space Systems Engineering and Acquisition Chair Professorship within the SSAG at NPS. The memorandum stated the professorship would “promote and guide a focused instructional and research program in space systems engineering and acquisition at the Naval Postgraduate School which will support the design, development, integration, test, launch and on-orbit sustainment of naval space systems.”

The current chair, retired Navy Captain Al Scott, graduated from NPS in 1996 with a Master of Science and Engineer’s Degrees in Aeronautical and Astronautical Engineering. Scott spent much of his naval career in various space systems engineering and acquisition positions, and brought a thorough understanding of the development and application of DoD and NRO space systems to the SSAG.

For PEO Space Systems, having a Chair Professorship with NPS means having educated and highly-qualified military leaders at the ready to develop and integrate space systems into naval and joint operations. Many of the students at NPS bring their own operational understanding to their new field of expertise, recognizing through direct experience the need for space capabilities for communications, navigation and ISR.  In turn, NPS’ partnership with PEO Space Systems allows students in the SSAG a chance to see practical applications of their research. Many NPS Space Systems graduates are later stationed in programs within PEO Space and apply their experience and education to developing reliable space systems to be used in the fleet.

“The intent was to have a mutually beneficial arrangement where the PEO would support the Chair position to assist with course instruction and research that addresses issues of concern to PEO Space Systems,” explained Scott. “And the school gets the benefit of additional teaching support, faculty participation, and having somebody with experience working in Navy space related jobs. Not to mention a lot of the students that graduate from our Space Systems program go on to work for PEO Space.”

Students within the SSAG receive their Master of Science degree in Space Systems Operations (SSO), or Space Systems Engineering (SSE) and leave NPS ready to handle the space-related operational and technical needs of the DoD. Through the Chair Professorship sponsored by PEO Space, students take part in real, applicable research that often translates into assignments to one of PEO Space’s programs, which has its headquarters in Chantilly, Va.

The relevant research and space systems curricula have prepared many NPS alumni for duties within the naval space systems community, and opened doors for more SSAG students to be exposed to the kinds of space capabilities that the Navy needs for the future. PEO Space is currently headed by Rear Admiral Liz Young, a graduate of NPS who received dual Master of Science degrees in Physics and Space Systems Operations in 1990. She serves as the Program Executive Officer for Space Systems, as well as the Director of Systems Engineering at the National Reconnaissance Office. 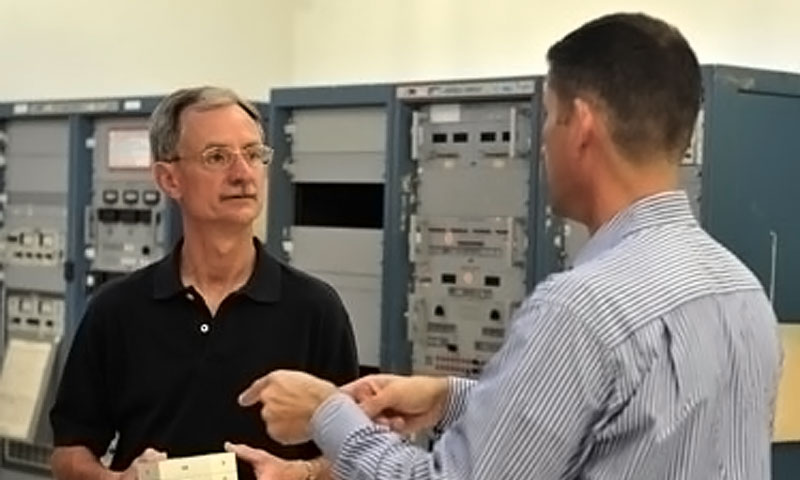 “The most knowledgeable and effective officers in space acquisition programs are graduates of NPS’ Space Systems Engineering program,” said Young. “There is always a high demand for NPS graduates within the acquisition community and the fleet.  They are key to our success.”

Young’s Flag Aide, Lt. Tom Parker, received his Master of Science Degree in Space Systems Engineering in 2007 from NPS. Because so many NPS alumni are assigned orders to PEO Space programs upon graduating, Parker noted that each side benefits from the relationship, and those benefits translate out into the fleet.

“The PEO benefits because they have officers coming out of NPS who can speak space, which is a warfare area unto itself,” said Parker. “It has its own issues. You need to understand how to communicate using satellites; the orbits the satellites are in, how radiation affects your satellites … all of those types of things.”

“For NPS, it’s really about meeting the need,” Parker continued. “What is it the surface Navy needs? What is it the Naval Aviation community needs? It’s about that cross-pollination. The officers going into NPS bring their fleet experience. Officers going out have that extra understanding of space and all of the unique needs that go with it.

“Space isn’t something the Navy teaches you at your basic schools,” explained Parker. “So if you are a surface warfare officer, traditionally you don’t need to know anything about space other than that’s where your communications come from. NPS teaches you the science and engineering behind all of that and how it’s more complicated than just turning on a radio and all of a sudden you have communication.”

The curricula for the SSO and SSE programs share several of the same classes in general space systems such as orbital mechanics, the space environment and satellite design. SSE offers students a detailed look at building satellites, including electrical power systems structures, thermal control, communications and satellite dynamics and attitude control. The degree-specific courses give students a hands-on technical education in engineering with a focus on building space systems to improve the Navy’s space capabilities. SSO takes a more operational, although still technical, approach to supporting the warfighter.

“Our curriculum takes people that have an operational background in aviation, submarines or surface warfare, and we put them through the Space Systems master’s program to give them in-depth exposure to space capabilities and how they are developed,” said Scott. “They will understand both the potential of space, as well as the problems or issues we face. So when they go out to the fleet, they can make sure that we are getting the most out of our space systems.”

Those needs are also being met through the research being done by students and faculty within the SSAG, which benefits various Navy programs throughout PEO Space.

Cmdr. John Fernandez, a Space Systems Operations student at NPS graduating in September and selected to receive the Admiral William Adger Moffett Space Systems Award, is currently working on his thesis, which looks at ways to improve the production efficiency of satellites using Lean Six Sigma principles. He looks at ways to save money and time during production of different spacecraft to meet the needs of the Navy.

“My research is on the application of Lean and Six Sigma manufacturing protocols in the satellite manufacturing industry,” explained Fernandez. “The interest was piqued over a review of national systems programs that were funded on cost plus contracts where there appeared to be little motivation for controlling process variation. The Lean and Six Sigma methodologies are all about doing something faster, better, with less waste and to customer specification.”

Fernandez sees the value in saving the DoD time and money in working with contractors on the development and production of space systems and aircrafts. There is currently little done to regulate efficiency in time and labor management for production within the DoD for space equipment, and Fernandez hopes that tightening budgets will wake people up to the need to set standards to ensure the best possible job is being done for the dollar.

“It seems kind of ironic to me that we spend so much money as a government on these national systems,” said Fernandez, “and yet we don’t demand that efficiencies be wrung out of every corner.”

While questioning companies on the efficiency of their practices can require a careful approach, Fernandez noted that it can be a good thing for companies that engage in his research, as they might find areas for improvement. Eliminating waste, improving reliability, and monitoring production rates are just some of the areas of focus for Fernandez’s research, but one of the key focuses is to have transparency in that data. 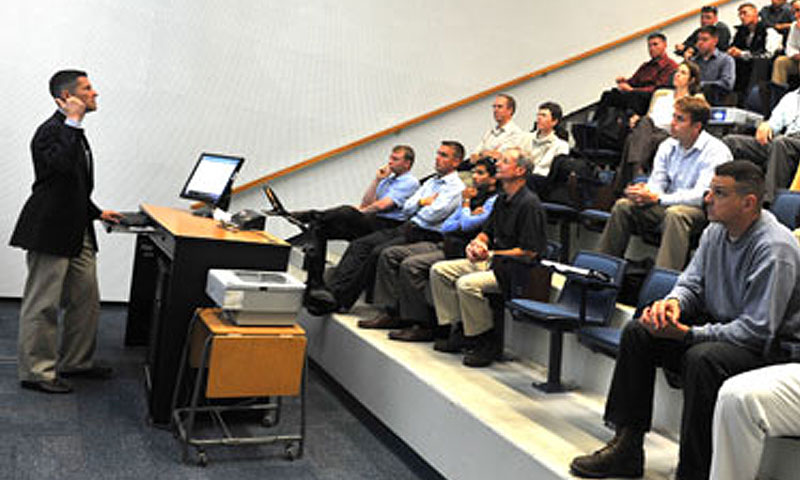 “It’s really about an alignment of expectations,” said Fernandez. “And it’s something that every Navy space program can benefit from.

“If we don’t put the effort forward to determine what we in the Navy want to get out of space, then we are going to be left last in line, and we will get the scraps,” he continued. “Being proactive and involved in the manufacturing of our national systems helps align the expectations and hopefully discovers risks before they become problems resulting with a significant schedule or cost slip.”

Another SSAG student, Marine Corps Maj. Robert Brunkalla, is using his thesis research to investigate future space communications needs and how those needs can best be satisfied. Brunkalla, who will graduate with his Master of Science Degree in Space Systems Operations in September, was selected for the Marine Corps Association Superior Service Award for Outstanding U.S. Marine Student. He has looked into what kinds of communications satellite capabilities will be required to meet the needs of the Navy as new challenges arise.

“My research is an analysis of potential replacements for the Mobile User Objective System (MUOS) satellite constellation – more generally, the Ultra High Frequency (UHF) communications for the military into the future. You can’t design and build a system overnight. The current system that is being launched by the end of next year is expected to have a 10-year lifecycle per spacecraft, meaning that by 2025, it’s realistic to expect there will need to be a refresh. Now is the time to start to plan what we are going to do, and how we are going to do it.”

The research being done by students within the SSAG not only benefits PEO Space Systems by offering fresh looks at complex issues, but also helps enhance the visibility of Navy space requirements and applications in a space acquisitions and operations community largely dominated by the Air Force. As technologies continue to evolve, the demand within the fleet to use space for intelligence, surveillance and reconnaissance, navigation, communications and other applications will continue to grow as well, offering even more opportunities for NPS students, and the Navy, to take the lead in space systems research.