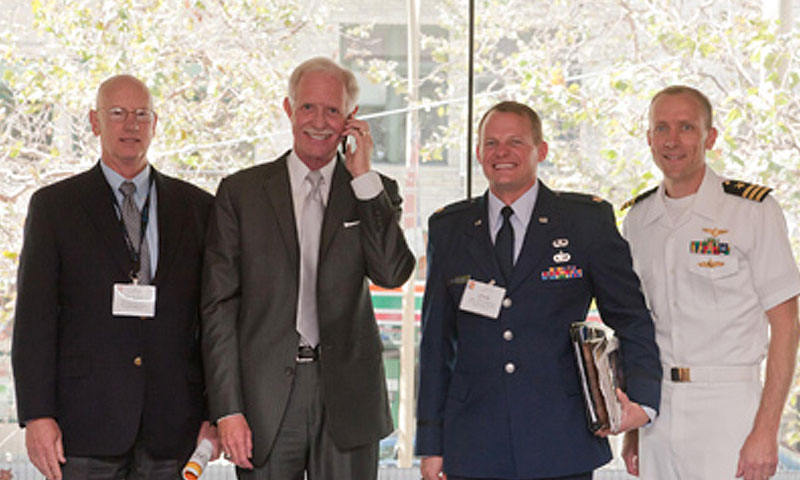 In a unique twist of fate, Air Force Maj. Chris McClernon, second from right, met and discussed his dissertation research with the very man he had closely followed while performing it, Capt. Chesley “Sully” Sullenberger, second from left. Pictured with Professor Michael McCauley, left, and Cmdr. Joe Sullivan, Director of the MOVES Institute, right, Sullenberger served as the keynote speaker of the Human Factors and Ergonomics Society meeting in San Francisco where McClernon was awarded the Alphonse Chapanis Best Student Paper Award.

On Sept. 18, NPS alumnus Air Force Maj. Christopher McClernon accepted the prestigious Alphonse Chapanis Best Student Paper Award at the Human Factors and Ergonomics Society (HFES) Conference in San Francisco. He was one of three finalists selected to present to the panel of judges at the annual event, and was announced the winner in front of more than 1,000 attendees. In an exciting mix of coincidence and fate, McClernon was also given an opportunity to meet the keynote speaker for the conference, Captain Chesley “Sully” Sullenberger, a man whose career McClernon had followed closely in his dissertation research.

“It’s still all too surreal. You look at the list of people who have received this award in the past 41 years, and some of them are now leaders in our field, and the people who are doing cutting edge research. So I am certainly very pleased to be associated with that group,” said McClernon. “Captain Sullenberger congratulated me and shook my hand, and it was really one of the highlights of my professional career, no doubt about it.”

Sullenberger made headlines, and a spotlight in McClernon’s thesis research when, on Jan. 15, 2009, he was forced to land U.S. Airways Flight 1549 on the Hudson River after a flock of geese took out both engines. With a clear and calm tone, Captain Chesley Sullenberger communicated the final transmission to air traffic control. “We’re gonna be in the Hudson.” Those audio recordings were captured in what was undoubtedly the most stressful moments of Sullenberger’s career, and yet his demeanor was nothing short of composed. He safely landed the Airbus A320 on the river, saving all 150 passengers and crew aboard.

On the other side of the country, McClernon, then a Ph.D. student at NPS, sat glued to the television, watching and re-watching every account of the events of the Hudson River landing. Already nearing the end of his dissertation research on the effects of stress training on pilot performance, McClernon saw a clear demonstration of what he called ‘experience-based expertise.’

“Sullenberger is amazing. I think what he did is phenomenal,” said McClernon. “And what we really should be looking at as researchers and as a military is how do we get everyone to that level? I often say in my research, none of flight 1549’s passengers could have picked a better pilot on the planet to pilot that aircraft.”

Sullenberger explained following the incident that he was confident in his ability to handle the situation, which was over only three and a half minutes after takeoff from LaGuardia Airport. He served as an Air Force fighter pilot and flight instructor, and spent 29 years as a commercial pilot.

“I was sure I could do it,” said Sullenberger. “I think, in many ways, as it turned out, my entire life up to that moment had been a preparation to handle that particular moment.”

In his dissertation, McClernon proposed that the military needs to be able to more rapidly get pilots to that level of expertise, in order to handle the inevitable and ever-changing challenges facing the warfighter. He used Sullenberger as an example, given all of the factors the pilot had to consider in deciding how and where to land the large aircraft in the most densely populated city in the country.

“You look at his background, over 40 years of experience,” McClernon noted. “He was a glider instructor – an expert at flying an airplane without running engines on it. He was an expert in research on training and crew resource management. How do we get our pilots to that level of proficiency, with that ability to control a situation? We can’t wait 40 years for everyone to have experience like Captain Sully.”

In his research titled “Stress Effects on Transfer from Virtual Environment Flight Training to Stressful Flight Environments,” McClernon studied two groups of pilots and their performance under stress. One of the groups received stressful flight simulator training while the other group received the same flight training in the absence of stress. The pilots were then subjected to real-world stressors in flight to gauge their ability to perform under stress.

“His research on stress training bridges the theoretical and applied worlds,” explained Dr. Michael McCauley, Research Professor with MOVES Institute and McClernon’s dissertation advisor. “There are many stressful jobs in the military. But, surprisingly, we have no empirically-based approach for introducing stress into the military training process. Chris’ research contributes to a foundation for how to introduce stress into training for the purpose of improving human performance in a stressful task.”

In his final dissertation, McClernon used Sullenberger as a case study, noting that his response to tremendous stressors was nearly perfect.

“The physiological reaction I had was strong,” explained Sullenberger following the incident. “And I had to force myself to use my training and force calm on the situation … it took some concentration.”

Before meeting Sullenberger, McClernon was amazed at how incredibly calm the pilot had been through the entire ordeal. In the audio transmissions with air traffic control, Sullenberger’s voice was unwavering as he relayed his decision to land in the Hudson.  McClernon often referred to Sullenberger in his dissertation as being unaffected by the stressors in the situation, a deduction that the humble pilot was quick to correct.

“I learned in talking to Sullenberger at the HFES conference that he was actually consciously trying to ignore the stressors. He said he noticed things like the tunnel vision. He noticed his physiology, his heart rate changed. He was perspiring,” explained McClernon. “He was absolutely affected physiologically by the stressors. And that’s something you don’t see in the audio tapes, you don’t see that from reading about him, and I didn’t even realize it until I talked to him one-on-one. Here we have an example of someone who is actually giving more credibility to my research that you can be in this highly stressful situation but somehow he learned to cope with it. He learned to maintain his composure even when exposed to those stressors. And while I thought he was an exception to the rules of my research, he was actually demonstrating them.”

Now the Executive Officer to Air Force Research Laboratory Commander Maj. Gen. Ellen Pawlikowski, McClernon sees the potential for his research to translate into a broader range of applications for the warfighter, extending beyond just preparing pilots for stress.

“We found that preparing people for one type of stressor also prepares them for other types of stressors that they have never experienced before, like the stressors associated with flying an aircraft for the first time,” explained McClernon. “Because of that crucial finding, now we are seeing how the results of my dissertation generalize to other contexts. Modern military operations are highly stressful and we can prepare people for these stressors with training, whether being shot at, diving into a frigid ocean, jumping out of airplanes, or any number of combat scenarios—I think this research is relevant to these contexts. That’s where I see the research going.”