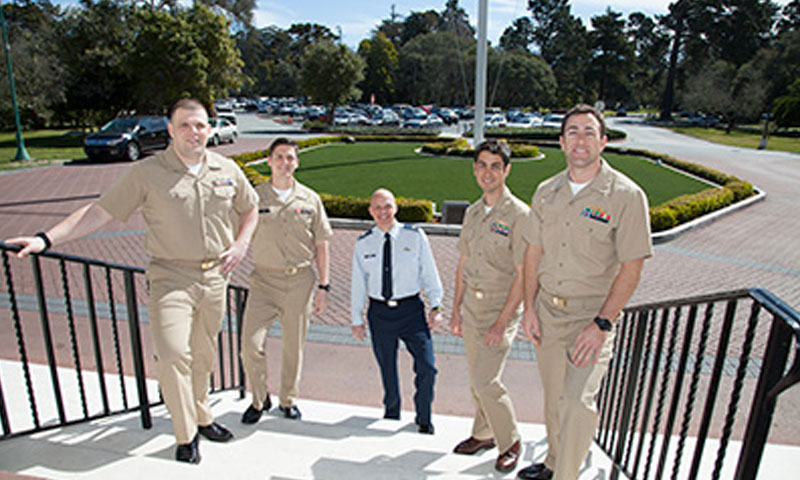 For a number of students on campus, being a part of the Naval Postgraduate School (NPS) community means an opportunity to collaborate with their peers, and to get students and leadership talking about the issues of importance to those who walk the halls of NPS each day.

The President’s Student Council (PSC) is made up of three such student-elected leaders – Chairman Lt. Kris Yost, Vice-Chairman Lt. Art Zepf, and Recorder Lt. Mary-Elizabeth Doty – as well as various members of the student body in attendance at the monthly council meetings. The goal of the PSC is to get students from all services engaged in the campus community, ensuring that student questions and concerns are heard, and that information handed down by NPS leadership is communicated to the student body.

“Many students may not really know what the council can do for them. If students have any issues that they want to bring up, anything they feel can be improved at NPS, we are here to address those issues and make things better,” said Yost. “We are here to inquire about any academic, administrative or quality of life issues at NPS and to take them up with the appropriate NPS leadership. We are also here to be a sounding board for the NPS President and Dean of Students for issues that they feel need to be addressed.”

Among the initiatives most recently on the PSC’s agenda has been an effort to bring attention to a little-known website where students can buy and sell their used textbooks with others on campus. Students can now access the book exchange website through the PSC page on the NPS intranet, through the current students section of NPS website, among others, and word is quickly spreading. While the book exchange portal has been around since well before the PSC got involved, the site is now getting significantly more student involvement than it had in recent years.

“I observed early on that the book-buying process was a little inconvenient in that students were scrambling with online venues to find books for class … It seemed pretty obvious to me that we, as students, already have the books,” said Graduate School of Business and Public Policy student Lt. Graham Fletterich, a member of the PSC since shortly after arriving at NPS last year. “We are taking a lot of the same classes, so why can’t we exchange books amongst ourselves?”

Fletterich found an existing, but well hidden, website for the student book exchange, and did the leg work to get the site moved to parts of the university’s websites that see more traffic. Transactions through the site are completely between the students involved and are not regulated or managed by anyone on campus. Students are encouraged to ask a fair price for their books and work together to make the transactions a reasonable alternative to purchasing new books elsewhere.

“I think the books are going for fair value, but the big thing is that you are avoiding the transaction cost – shipping and tax, for example. Maybe you are only saving $20, but it’s convenient,” said Fletterich. “You can pick it up right away. If I can meet you after class right outside, that saves me from a whole lot of steps in purchasing a textbook.”

The PSC is also actively involved in making a difference beyond the gates of NPS, with volunteerism and community outreach one of the major ongoing goals of the council.

A growing number of students have been pitching in to help the Veterans Transition Center (VTC) through donations of clothes and household goods. The council became involved with the VTC under the direction of Maj. Ray Erickson, who put out a call for donations to be used in assisting homeless veterans and their families to find housing and services for long-term stability.

“We, as a group, decided that we wanted to step up the student council efforts on philanthropy and giving time to serving the community,” he said. “But we need to find out where can we best serve the community as a student body.”

Erickson became familiar with the charity after noting a significant number of homeless men and women around town. After some research, he says he learned that as high as 60 percent of homeless individuals in any given state are veterans. Knowing that, the PSC felt drawn to help their fellow service members.

The Veterans Transition Center provides food, clothes and services to the homeless veterans of Monterey County, and also provides housing for as many as possible at their still-growing facility in the refurbished barracks on Fort Ord.  After facilitating a donation drive in October, where students were encouraged to pass along used housewares and clothes to the VTC, the sum of their donations topped two tons, and the organization’s facility ran out of space to hold it all.

“We gave them so much stuff that they had nowhere to put it. And they had to ask us to put a time-out on bringing donations for now until they could make space for it all. They even had to give some of the donations away to other organizations in town, so that was good news,” said Erickson. “So right now we are kind of paused on bringing them stuff. But we do have an opportunity to donate some manpower this month by selling tickets for their fundraiser barbecue in May.”

The second annual VTC barbecue will welcome members of the community to enjoy a lunch and tour of the center’s facilities, with proceeds from ticket sales going back into funding the VTC programs. Last year’s event was a small one, but the PSC hopes to get enough students involved that this year’s fundraiser becomes bigger than the VTC could have hoped.

“Hopefully we will get about 25 to 30 people on campus selling tickets within their programs,” said Erickson. ”The goal is to make it too big for the VTC to handle.  It would be great for them to have a big venue, a ton of food and a really great event.”

Presently, the PSC is also working with NPS leadership to review and amend the Secretary of the Navy Guest Lecture (SGL) nomination process. Students interested in weighing in on SGLs or other relevant campus issues are encouraged to attend the council’s monthly meetings, and be added to the PSC mailing list to be kept informed of current and future goings on around campus.