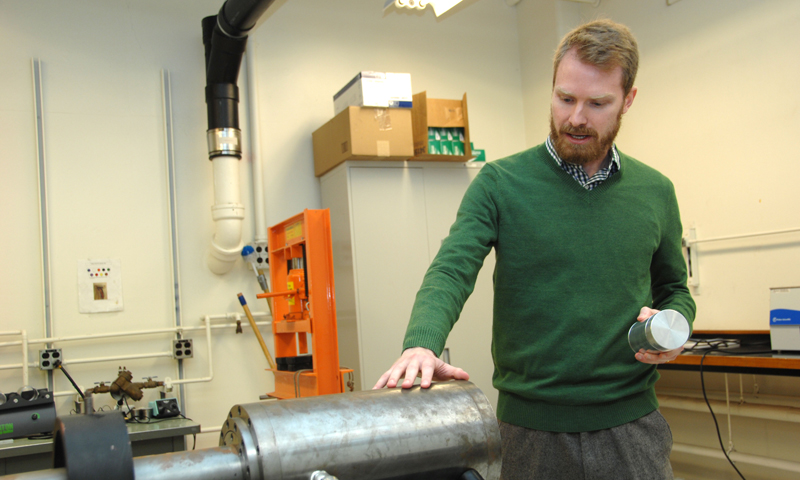 Like any component of the Navy, the Naval Postgraduate School is dedicated to preserving and honoring the history of the installation and the legacy of those who have contributed to the betterment of the institution and armed forces.

NPS’ rich history is evident in a great deal of its infrastructure and design.  Menneken Circle, for example, tells an intriguing story of a man whose affinity for research led to the creation of an award to be passed down for generations.

The Carl E. and Jessie W. Menneken Faculty Award for Excellence is awarded annually in honor of its namesake to an NPS faculty member for outstanding effort and achievement in research with identifiable impact on the Navy and Department of Defense technology.

Carl E. Menneken, the first Dean of Research at NPS, joined the university faculty during World War II and served as a faculty leader in the school’s development of Navy-oriented scientific research. His wife, Jessie, provided the means to fund the annual award in his honor in 1988.

The most recent awardee is Assistant Professor Dr. Joseph P. Hooper of the Department of Physics, recognized for his highly-regarded research on explosives, explosive detection, lightweight armor and materials under extreme conditions. Hooper’s research has direct applications to the Department of the Navy and the DOD.

“Most of our research focuses on the physics and materials science of non-nuclear conventional weapons,” said Hooper. “For example, one of our main projects is on reactive materials, compounds which are largely inert under normal conditions but can release significant combustion energy when put into a warhead. These can potentially offer a range of new weapons effects, as well as providing materials that are safer than traditional explosives but maintain similar lethality. The safety aspect is a big issue for the Navy since our ordnance is traditionally stored next to our personnel."

Hooper has published nine peer-reviewed articles since joining NPS in 2011 and is working on both computational and experimental research programs.

“We’ve been fortunate to have a large group of students involved in our research,” said Hooper. “We’ve had about 13 student theses out of our group within the last couple of years that have focused on conventional weapons, armor and related topics for the Navy and DOD. The students bring a lot of operational experience and insight to this research, which helps a great deal in thinking clearly about the direction of a project or its possible applications in the fleet.”

Honored for the recognition in the commemoration of an NPS leader in research, Hooper was grateful to the students and to the sponsors that made his team’s research possible.

“We’re very appreciative to the Office of Naval Research (ONR) and the Defense Threat Reduction Agency (DTRA) that have sponsored much of our work,” said Hooper. “This type of research really is not possible without the support from our sponsors and considerable hands-on work from our students.”

Professor Hooper earned his Ph.D. in physics at Tulane University in 2006. Prior to joining NPS, he was a Research Physicist at the Naval Surface Warfare Center, Indian Head Division, studying the basic physics of explosives. He has published more than 30 peer-reviewed journal articles, with much of his research funded by ONR and DTRA, as well as the Department of Homeland Security.