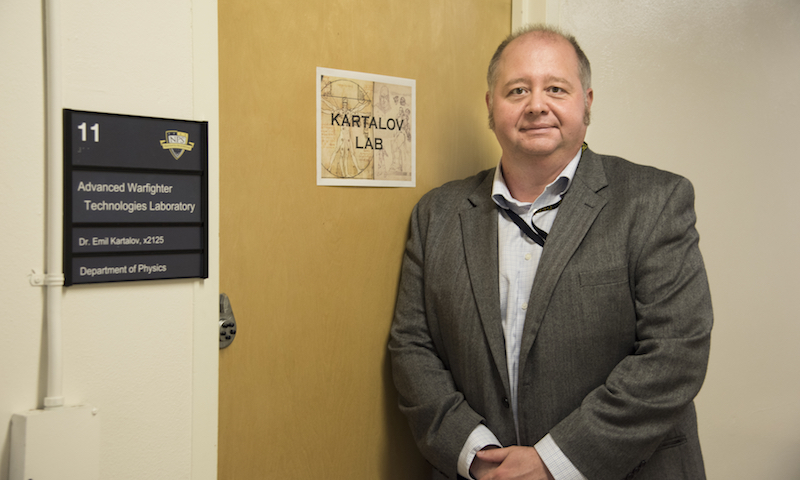 NPS applied physics associate professor Emil Kartolov has recently been awarded three additional patents, discoveries which could significantly reduce the time and cost of the diagnosis of infectious diseases.

A Naval Postgraduate School (NPS) applied physics associate professor was recently awarded a series of patents which could dramatically reduce the cost and time of infectious disease diagnosis.

Dr. Emil Kartalov received three patents in September – bringing his total number of patents awarded to 21 – for work he did at the University of Southern California (USC) prior to coming to NPS. The research details a new way to more efficiently read DNA taken from blood samples to more rapidly detect pathogens. By measuring the brightness of light in a standard polymerase chain reaction (PCR) test, the method can provide exponentially-greater fidelity than currently available analysis.

“Because we have improved optical systems, it’s no longer just a ‘yes or no’ answer about the sample. You can actually start getting information about the amplitude of the light that you get out of [the PCR],” Kartalov explained. “This opens a new dimension in which you can extract more information based on the brightness of the light.”

PCR has been available since the 1980s to analyze strands of DNA. Working essentially like a Xerox machine, it replicates focused DNA segments and, through a series of reactive tests, provides a wealth of information on the presence of mutations found in types of cancer or viruses.

When a sample is put in the PCR machine, it yields a fluorescent signal which lights up in a particular color “like a Christmas tree,” Kartalov describes, depending on the genetic sequence associated with a particular disease.

“The problem is that one color corresponds to one question, and there are only so many colors you can run simultaneously in the visible spectrum and they start overlapping,” he said. “As a result, you’re limited as to how many questions and answers you can have.”

Furthermore, one color must always be sacrificed for quality control to ensure the PCR test is working. Even with significant advances in optics over the last decade, this means that thoroughly screening for diseases can be a time-consuming, and costly, endeavor, requiring multiple samples.

“We thought about that and came up with a solution based on the idea that brightness of the light will tell us which sequence is being treated,” Kartalov explained. “When you complete the PCR, you know how much light to expect, so basically whatever the light level is you can unambiguously decode it into specific sequences associated with particular diseases.

“You can actually unambiguously produce many more questions and answers on the same sample, in the same machine with the same available colors,” he continued. “That’s a huge change in the game!”

Perhaps the greatest game changer this technology introduces would be the significant decrease in time and cost it takes to process samples.

The real limitation on current PCR machines are how long it takes to run each test in clinical laboratories. If each test requires one and a half hours of machine time, for example, it could take days to properly analyze a 24-test set.

“Instead of doing six different tests, the way we would potentially be using this technology would take just one test,” Kartalov said. “Since you’re essentially charged per test, it’s potentially six times cheaper per test.”

He also envisions a future where this technology allows for the use of small, hand-held machines to swiftly diagnose diseases such as the Ebola Virus.

Requiring the minimal computer processing power of a cell phone, Kartalov foresees a miniature, disposable PCR being developed which can be plugged into a phone in much the same way as credit card readers do now to process blood samples in the field.

“Instead of waiting for an hour and a half, it can be done very fast in 15 minutes and then suddenly you get a sufficiently accurate result much faster and cheaper than having to go to a clinical laboratory and waiting,” he said.

Kartalov filed the patents several years ago while an assistant professor at USC. He worked with his co-inventors to found a startup company, ChromaCode, which will develop the technologies for the medical industry.

Kartalov has turned to integrating his biotech background into interdisciplinary endeavors with military applications. In 2016, he came to NPS and became a civil servant, thus precluding involvement with their commercialization due to potential conflict of interest.

“But that’s OK,” Kartalov laughed. “It was a reasonable sacrifice to become part of the NPS team, and it’s a trade-off I’m not unhappy about.”