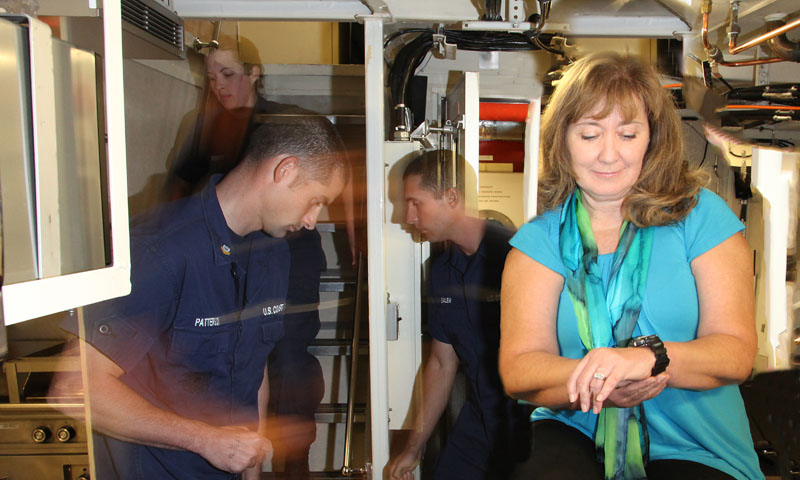 NPS Associate Professor Nita Shattuck, pictured during one of her past shipboard studies, has dedicated several years to researching non-standard watch and rotation schedules designed to optimize crew performance by matching sleeping patterns to the body’s natural rhythm.

Naval Postgraduate School (NPS) Department of Operations Research Associate Professor Nita Shattuck’s long struggle to improve the amount and quality of Sailor rest at sea has led to the creation of a new online portal. Focused on “Crew Endurance,” the website offers Navy leaders a variety of tools that Shattuck hopes will be used to improve the sleep and operational effectiveness of deployed Sailors and others, around the world.

The portal features everything from empirical data touting the importance of crew rest, to sample watch schedules and instructions on how to implement them. It even offers online assessment tools designed to help individual Sailors to gauge their level of fatigue.

“Our goal is to expand the website to be able to create schedules based upon individual requirements at different organizations,” said Shattuck. “There is not one watchbill that fits all, the watch schedule must be adapted to individual crew needs.”

“The website is a one-stop resource for personnel to receive tools and information on how to implement feasible watch standing schedules,” added long-time Shattuck team member Jane Barreto.

For more than 15 years, Shattuck and an ever-growing team of current and former NPS students have worked to counter a pervasive culture among Surface Warfare Officers, and others, that champions hard work but tends to view sleep as a luxury.

Shattuck and her students’ work is based on the notion that adequate sleep is essential for peak performance. She notes that when Sailors are sleep-deprived, the ability to complete their assigned tasks is diminished and the Navy’s ability to accomplish its mission is compromised.

NPS Associate Professor Nita Shattuck, pictured during one of her past shipboard studies, has dedicated several years to researching non-standard watch and rotation schedules designed to optimize crew performance by matching sleeping patterns to the body’s natural rhythm.

“When you take people to the ragged edge of fatigue, you have health and emotional consequences,” said Shattuck, who adds that sleep deprivation leads to a host of problems including increased risk taking, poor communication skills, and even impairments in moral judgment.

“We want to help decision-makers balance cost, performance and risk. They need to understand the implications of how their decisions affect the warfighters,” she stressed.

Norwegian Navy Cmdr. Christoffer Eriksen is a Human Systems Integration student at NPS. He is working with Shattuck and the command team aboard the USS Nimitz to look at the manner in which the Nimitz has increased innovation amongst its staff. And the primary innovation that Eriksen is looking at is the implementation of Shattuck’s watchbill system.

“I used the Nimitz as a case study to look at how they were able to be innovative where others have not,” said Eriksen. “Initially there was resistance to change, because the new watchbill changed the way things had always been done.”

But Nimitz Commanding Officer Capt. John Ring set out to meet that resistance head on.

“We discovered we had a problem with Sailors getting insufficient sleep, so we holistically looked at all aspects of a Sailor’s day. My predecessor had worked with Dr. Shattuck in the past. Bringing her on was part of our initial holistic self-assessment. It wasn't a hard sell to try her approach,” said Ring.

That was due in part to Ring’s ability to show the benefits of change without simply ordering his subordinates to comply. It was important to him to ensure that his Sailors understood that what was being done was for their benefit, and that changes to the watchbill were not merely a ‘command decision.’

“This was an opportunity to improve both quality of life for the crew, and productivity on the ship,” said Ring. “It was really a no-brainer in the end. The challenge going forward is to prove we can sustain this watchbill in a more dynamic environment.

“We have data from response studies that show scientifically that the crew was more alert and responsive. I spoke to Sailors after we implemented 3/9 [watch-bill schedule] who said they would ‘aggressively pursue’ their work lists with a three-hour watch. These same folks admitted that they would sometimes put off work on a longer watch, believing they would have time to get to it later, but in the end did not accomplish that work,” Ring continued.

Shattuck will be introducing her portal at an upcoming “Restrictive Effects of Sleep” workshop sponsored by the Office of Naval Research and the office of the Assistant Secretary of Defense for Research and Engineering. Participants will be looking specifically at the level of fatigue that service members are being exposed to.

“There is a great deal of interest in this area and potential sponsors are coming together to discuss the way forward,” said Shattuck.

For more information about Shattuck’s research or to implement your own watch bill, check out the new Crew Endurance portal at http://nps.edu/web/crewendurance.