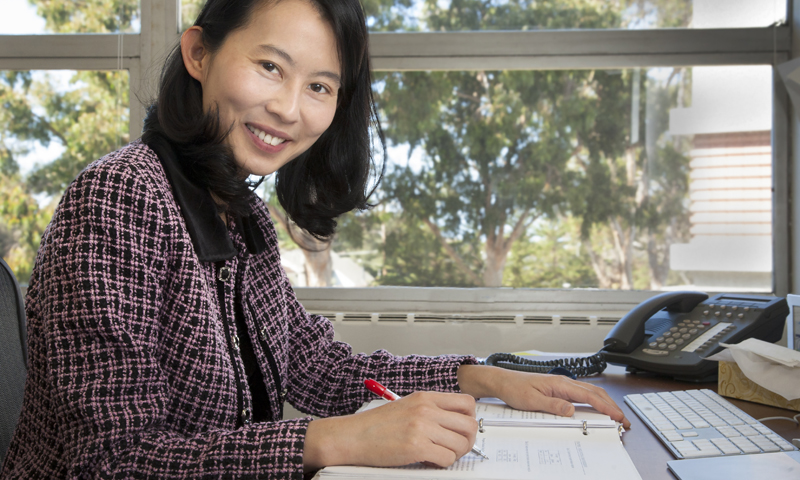 When young men and women dream of careers with the Navy, they are likely drawn by romantic notions of far away ports, exotic seascapes, or the thrill of naval aviation. They probably don’t think about occupying unassuming offices at a university, crunching detailed complex data sets, but that is just what Naval Postgraduate School (NPS) Associate Professor Yu-Chu Shen does on a daily basis, and the results of her work are no less dramatic than the Sailors she supports.

For the last several years, Shen has scoured health care databases, identifying trends and giving policy gurus a lot to think about. At the heart of her work is the notion that empirical data, when properly analyzed, can answer critically important questions without partisan filters or presupposed conclusions.

“I am an empirical analyst. Everything I do is related to data, whether it’s about evaluating policies affecting civilian health markets or analyzing mental health readiness in the military,” explained Shen. “I am not the type to develop complicated theoretical models.  But rather, I formulate hypotheses that have policy relevance, and rely on real-world data to test those hypotheses.”

But while Shen’s work may not lead to novel new theories about life, it may help policy makers make life better. Lately, Shen has turned her analytical eye to serious mental health issues. Her analysis is part of an effort to measure the risk factors that contribute to costly mental health conditions, such as Post Traumatic Stress Disorder (PTSD), major depression and substance abuse.

She was not surprised to learn that Iraq and Afghanistan veterans had higher rates of mental health conditions. But Shen was surprised to learn that the Navy had the highest odds ratio for PTSD when compared to populations of service members that had and had not served in Iraq and Afghanistan relative to Army and Marine Corps veterans. She also noted that members of the Air Force had the lowest odds ratio of PTSD overall.

Shen also conducted an in-depth analysis of suicides in the Navy. “I think of suicide as an event that occurs in stages,” she said. “With suicide, you start with ideation, which may lead to an attempt and eventual death.

“I looked at whether or not the risk factors differed throughout the various stages [of progression],” continued Shen, adding that she was able to determine, by linking military data with death certificates from the social security administration, that suicides were occurring many years after service members separated from military service. Perhaps contrary to popular opinion, initial results indicated that PTSD did not increase the risk of suicide deaths and that depression and substance abuse were both much bigger risk factors.

In a separate project, Shen also found a correlation between negative performance outcomes and low scores on sections of the Army’s Global Assessment Tool – an online questionnaire used by the Army to assess the psychological health of soldiers for self-awareness purposes.

“We tend to find that people who score higher on the depression scale have a much higher attrition rate. Also, if you have difficulty adapting, you tend to have a higher rate of attrition,” explained Shen. “Understanding the relationship between psychological health and performance outcomes allows us to explore possible screening options that hopefully will provide savings to the Army down the road.”

Although seemingly disparate, all of this is directly related to Shen’s early work focused on how system level factors in the U.S. healthcare system affect patients’ access to care and their eventual health outcomes.

One such system level factor she examined was payment cuts. She used the Balanced Budget Act of 1997 as a natural experiment, which reduced federal payments to hospitals in different degrees.

“I compared patient outcomes before and after this policy was implemented between hospitals facing small and large payment cuts, and asked whether or not payment cuts affect patient care,” said Shen. “They do.  As a result of payment cuts, hospitals have to juggle [priorities], reduce staff and discharge patients earlier. Resource constraints like these resulted in worse mortality outcomes.”

Another system level factor she examined was a common practice in the hospital sector known as ambulance-diversion, wherein ambulances are diverted from nearby hospitals to those with greater capacity.

“When there are too many patients, or they cannot accept new patients due to other resource constraints, [hospitals] will send out alerts to ambulances to divert patients elsewhere,” said Shen. “I am particularly interested in the effect of ambulance diversion on patients suffering heart attacks and congestive heart failure.”

According to Shen, heart attack patients are at a greater risk of experiencing negative outcomes than others when ambulance diversion occurs, due to what physicians refers as to the  “golden hour,” the critical 60 minutes from the onset of symptoms where medical intervention is the most succesful.

“I looked to see if greater exposure to ambulance diversion resulted in a higher rate of mortality, and we do see that,” said Shen.

Shen’s work was recognized late last year by the NPS Foundation with its Menneken Award for Excellence in Scientific Research. The award is conferred upon faculty members for outstanding effort and achievement in research that makes a significant impact on the Navy and the Department of Defense.