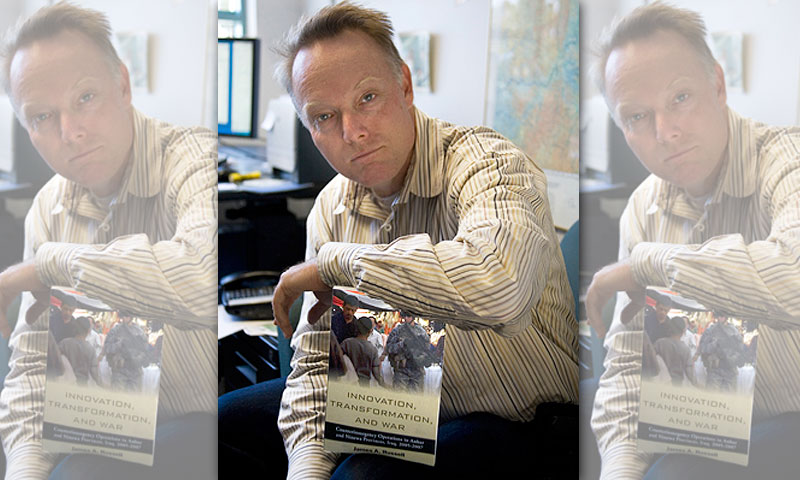 Associate Professor James Russell examines innovation in counterinsurgency tactics developed at the unit level during the Iraq war in his new book.

As the saying goes, ‘Necessity is the mother of invention.’ According to NPS Associate Professor James Russell, that was certainly the case for U.S. troops in Iraq at the height of the conflict. Russell’s new book, “Innovation, Transformation and War: Counterinsurgency Operations in Anbar and Ninewa Provinces, Iraq, 2005-2007,” suggests that it was out of necessity that units developed new counterinsurgency tactics in fighting Sunni insurgents during this critical period of the war.

Through first-person accounts and extensive field research, Russell examines the innovation that emerged within a group of Army and Marine Corps units when faced with new challenges. He uses case studies from Iraq to explore how and why militaries adapt and innovate in war.

“During the war in Iraq, American military units underwent significant changes to the way they conducted operations in the field,” explained Russell. “My case studies reveal that the battalions that I studied in these two provinces built significant new organizational capacities during the course of their deployments. And further, they did so largely without significant direction [from] civilian and military command authorities.”

Russell began teaching at NPS in 2001 as a Fellow from the Office of the Undersecretary of Defense for Policy, and he now teaches courses on U.S. foreign policy and security strategy. But it wasn’t until 2006 that the idea of innovation in war really struck a cord with him. While attending a presentation by analysts from the Joint Forces Command’s Joint Center for Operational Analysis in 2006, the topic of emergence of “best practices” in counterinsurgency in Anbar and Ninewa captured Russell’s interest.

“Much of the literature on military innovation looks back at this sort of phenomena in wars earlier in the 20th century,” Russell explains. “So I wanted to look at the issue from the context of the latest war in Iraq.”

One of the aspects of innovation that Russell touches on in his book is the popular perception of the war and how it differs from actual events. He looked to specific case studies, first-person accounts and media reports, and ultimately found that units were developing alternative tactics in their operations, giving them an advantage that helped turn the tide in the war against insurgents.

“My book argues that during this period in the war, when the popular perception was that the U.S. was sort of going down to defeat and strategic disaster, the battalion commanders were developing better ways to fight the insurgency all on their own,” noted Russell. “That contributed significantly to the defeat of the Sunni insurgency in the Anbar Province in late 2006 and was a critical turning point for the struggle to improve security in the country.”

Russell noted that there were many factors that were publicly believed to have been responsible for the turn in the war, and unit adaptability was not among them. That’s not to say, however, that those other factors were not significant, Russell explains.

“The popularized history of this war is that the promulgation of new counterinsurgency doctrine, the appointment of General Petraeus and the additional troops, all of which were announced in early 2007, were responsible for improved American military performance and the improved security situation in the country,” said Russell.

“My book doesn’t argue that those factors weren’t important,” he continued. “Clearly they were. But it’s a simplification to assert that these three things by themselves helped improve American military performance on the ground. The case studies illustrate that significant momentum was building in the field over the previous 12 months.”

Russell notes that his book is about the importance of empowered leadership at all levels of the units studied, which helped lead to learning organizations that significantly improved their performance over the course of their deployments. “This book should be read by anyone interested in how junior leaders can change the course of a war all on their own,” he added.