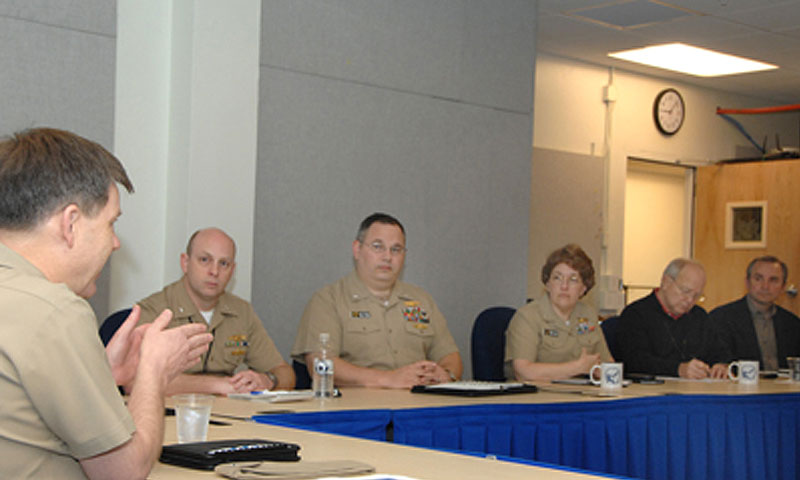 Corporate Director for Information Dominance, Rear Adm. David Simpson (far left) met with a group of NPS faculty from across departments for a round table discussion about the Information Dominance curricula. Simpson graduated from the Space Systems Operations program in 1982

As part of a return visit to his alma mater, NPS alumnus, Corporate Director for the Deputy Chief of Naval Operations for Information Dominance, Rear Adm. David Simpson met with a small group of faculty from across disciplines to discuss the Navy’s needs and the expectations that the Chief of Naval Operations (CNO) has for members of the Information Dominance Corps (IDC). One particular area of opportunity within the IDC expressed by Simpson during his Feb. 11 visit to NPS was in cyber systems and operations, and he noted that extra attention should be paid to fully incorporate the cyber domain into the IDC curriculum.

The Navy announced the establishment of the IDC in Oct. 2009, in an effort to streamline and unite the information communities with a common goal: dominance. The IDC looks to keep the Navy on the forefront of the information domain, in areas such as intelligence, electronic warfare, command and control, meterology, and cyber– the fields that secure information against and retrieve information regarding potential adversaries.

Vice Adm. Jack Dorsett, Deputy Chief of Naval Operations for Information Dominance and Director of Naval Intelligence, and CNO Adm. Gary Roughead have made that mission a key focus, relying on institutions like NPS to prepare the interdisciplinary curriculum that will best support the unique needs of the IDC officers. Simpson, a Space Systems Operations graduate, echoed their sentiments.

“We initially had difficulty cross-communicating and defining the cyber battle space,” said Simpson. “When you get to the details of describing the boundaries of cyberspace, and who has responsibilities for cyberspace, that’s not easy. Bringing the IDC together for the Navy has really allowed us to get past a lot of that. But now we need to ensure that our officers see that battle space, understand it, and are able to communicate it in terms that the larger command structure understands.”

During his visit, Simpson spoke to NPS’ faculty about the kind of curricula that will best fulfill those goals. Given the broad spectrum covered under the IDC, including Information Professionals, Information Warfare Officers, Intelligence Officers, Oceanography Officers and the Space Cadre, NPS leadership strive to keep the most current and relevant curriculum possible.

Simpson expressed concern that because cyber is a fairly new area of focus, students need to be well prepared for the uncertain nature of cyberspace, potential dangers in that battle space and our need to find operational opportunities. Simpson expressed interest in an open line of communication between the NPS faculty and the Navy Staff, hoping to foster discussion and growth surrounding the IDC curriculum.