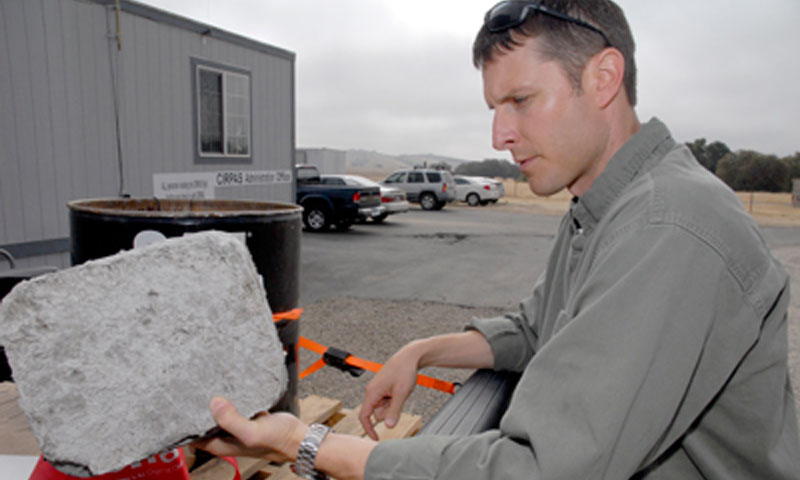 The Naval Postgraduate School (NPS) and its innovative faculty have begun to see their hard work bear fruit with a series of new patents highlighting the diversity of student, faculty led research endeavors ongoing at the university.

Recent patents include everything from the development of a novel explosive containment system to a geo-positioning method that relies upon digital television (DTV) signals, as well as an advanced manufacturing process, and an ion thruster for use aboard small satellites.

Kicking off the rash of patented discoveries, NPS Department of Defense Analysis alumnus Lt. Deward Cummings was awarded a patent for his “Explosives Storage System.”

Cummings’ invention is a technique for building collection points designed to mitigate the effects of Explosive Remnants of War (ERW). It provides a means to safely and securely store collected explosives and has both security and humanitarian implications.

Explosive Remnants of War (ERW) are a global problem contributing to instability in undeveloped and developing regions of the world. They have become a primary component used in Improvised Explosive Device (IED) fabrication, and pose a direct threat to the U.S. and its strategic partners, Cummings explained.

In addition to their potential application in IEDs, Cummings notes that ERW pose a safety risk to civilian populations who may inadvertently stumble upon them and cause them to detonate. With affected populations in mind, Cummings strove to develop a solution that was locally sustainable and affordable, and that could be used by local populations long after conflicts end and coalition forces return home.

“In spite of the many robust ERW and landmine awareness education programs and disposal efforts, there remains a glaring capabilities gap in global ERW management,” said Cummings. “Finding ERW is not the principal problem affecting stability, safely removing and disposing of ERW in a timely manner is.”

To that end, Cummings’ invention calls for the creation of collection points and provides diagrams and other print material to teach affected populations his technique for building them.

“The only thing that we provide is the knowledge of how to a build an explosive collection point using this technique. It’s the old ‘teach a man to fish’ analogy,” said Cummings.

And while he is very proud of his patent, Cummings sought to patent his technique to keep it open source and available to the public, not to profit from it personally.

“We didn't patent it to protect the design for our use, we patented it to ensure that it will remain open source for everyone to use,” he said.

NPS alumna, Kaylene Carter, along with university faculty Drs. Murali Tummala and John McEachen with the Department of Electrical and Computer Engineering, and Rohan Ramlall, an electrical engineer with the University of California, Irvine, were recently awarded a patent for their “Hyperbolic Positioning Method Using Broadcast Digital Television Signals and Monitor Receiver Ranging.”

The team’s invention has both military and civilian applications. And because it utilizes DTV signals to determine a user’s location, it may fill a need for accurate positioning data in GPS denied environments.

“The Navy relies on GPS for everything from targeting to positioning and our adversaries know that. TV signals are always around, and they tend to be global. We can leverage the fact that there are existing signals in the environment to help us locate ourselves in the event that we can’t locate ourselves using GPS,” explained McEachen.

The invention also offers an advantage in urban areas where modern, asymmetric battles are increasingly waged.

“GPS fails if you jam it …TV signals are stronger and operate on different frequency bands,” said Tummala. “They can penetrate buildings, whereas GPS tends to fail and tends to be fairly weak [in indoor environments].”

McEachen and Tummala note that the team’s exploration of alternate uses of DTV signals and other signals on the electromagnetic spectrum is part of a larger effort within the Department of Defense (DOD) to enhance its capabilities in the area of electromagnetic maneuver warfare.

“This is just part of that agility in the electromagnetic spectrum …The idea is to stay one step ahead of the adversary. These techniques allow us to be agile and to conduct electromagnetic maneuver,” said McEachen.

Past work in this area has relied upon triangulation. But Carter and her co-patent holders discovered that they could determine their locations with only two sources using a process known as hyperbolic positioning.

“You determine your location by measuring time difference of arrival as opposed to the previous method which utilized time of arrival. If I know I am five miles from A and three miles from B, I use the difference of two miles to give me a line upon which I am standing somewhere. [Then] If I am able to determine the distance between Tower C, Tower B, and myself, I can determine where I am by ascertaining where the two lines intersect,” Carter explained.

Their thruster provides a dual satellite propulsion system utilizing carbon nanotubes. The invention has applications aboard small satellites and CubeSats and it can be miniaturized to perform aboard nano- and pico-satellites.

“It feels good to get this patent, it was a culmination of a lot of work, not just by myself but by Drs. Brewer, Oswald and Farmer as well. We were looking at one one thing and observed an unexpected phenomenon that eventually led to this patent,” said Johannes.

Their invention uses an additive manufacturing process for forming shaped bodies known as Chemically-Driven Powder Consolidation (CDPC) and provides an alternative method for manufacturing that is cheap and efficient.

“It’s possible to take a micron-sized powder and add it to a solution and to have that powder turn into a larger object by merely adjusting the pH of the solution. We developed that into a process that allowed us to make several objects that could be used for anything from battery materials to other small parts,” Johannes explained.

“We could not have even gone down this road if it wasn't for our patent attorney. She is wonderful, and she has made these opportunities available to us. I think it is really good for NPS and the Navy to have someone like her that can allow us to transfer this kind of technology to industry,” said McEachen.