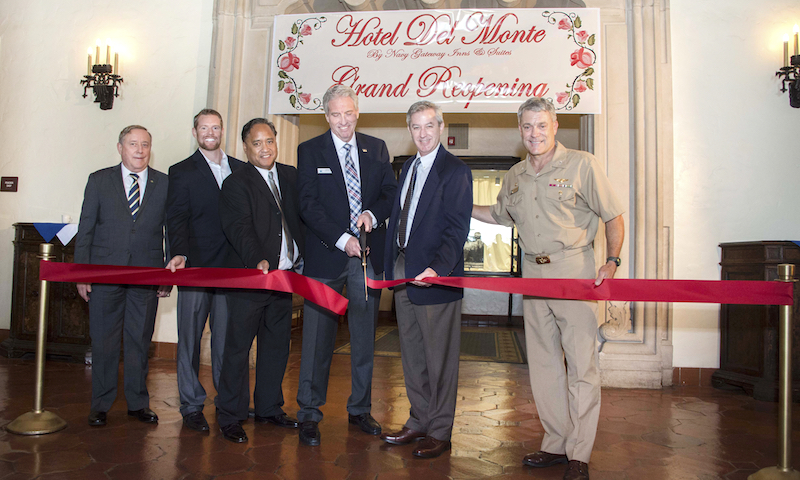 The snip of a ribbon officially opened 77 new guest rooms at the Navy Gateway Inns and Suites (NGIS) Wednesday, Oct. 4, marking the end of a $30 million construction project.

“We made something special here and it’s the flagship property of Navy Gateway Inns and Suites,” said Matthew Jordan, Navy Region Southwest Housing Program Manager. “The construction team knew the importance of this project and the results are astounding, and every room is different.”

“To be part of this project has been very special to me because I have known this property for such a long time,” added NGIS Monterey Manager David Wolf. “I moved to the Monterey Peninsula in 1954, and as an Army brat, my family visited the facilities here often. In fact, I learned to swim in the swimming pool that was converted to what is now the reflecting pool.

“I am extremely proud of the results of the renovation and know our future guests will be excited with what we were able to achieve,” Wolf continued. “I am looking forward to opening our new rooms as we continue the legacy of the historic Hotel Del Monte.”

The extensive project that began in 2016 included complete removal and rebuilding of guest room walls and ceilings and enlarged bathrooms with period-sympathetic tile. The entire infrastructure of this part of the hotel, including ventilation, heating, electrical, plumbing, fire protection and communication systems was replaced with state of the art equipment.

“Each room was completely gutted and rebuilt to modern standards. These new rooms were carefully designed to retain the character and charm of the hotel's Spanish Colonial Revival architecture, while providing completely new fixtures and up to date technology,” said Vicki Taber, installation Cultural Resource Manager.

The current Hotel Del Monte was built in 1925, on the footprint of a wooden hotel that had twice burned to the ground. Hobart and Tantau, noted architects of the time, designed the building to be nearly fireproof. Built almost exclusively of concrete with plaster finishes and decorations,the hotel was purposely built in a more relaxed style than the first two hotels, which were boldly Victorian. The historic Hotel Del Monte has long been a centerpiece of Monterey County, according to the installation commanding officer who grew up in the nearby Salinas Valley.

“For those of us who grew up in Monterey County, this was the center of gravity as one of the grand hotels on the West Coast. It’s our link to the past,” noted Capt. Rich Wiley, Commanding Officer Naval Support Activity Monterey.

The only area to retain the historical materials and look are the corridor walls, hand-finished in plaster with a semi-smooth texture, vaguely resembling adobe stucco, according to Taber.

“Crown moldings are also the original hand-molded plaster. This wall treatment, used throughout the hotel, is still unmatched in strength and durability. It’s fire-resistant, has low sound transmission, and provides a character that cannot be matched with modern methods,” Taber added.

Retaining those features in the corridors required the builder to remove the ceiling up to the molding, replace all lighting and fire suppression systems, add conduit, and replace the ceiling.
In the end, the team managed to strike a balance of retaining original materials and updating the hotel for today’s guests. According to Taber, the project fully satisfied the requirements of the National Historic Preservation Act and was coordinated with the State Historic Preservation Officer.

In its prime, Hotel Del Monte was a 20,000-acre resort complex with extensive botanical gardens and sports facilities. It is considered to be the catalyst for Monterey’s modern-day tourism industry.