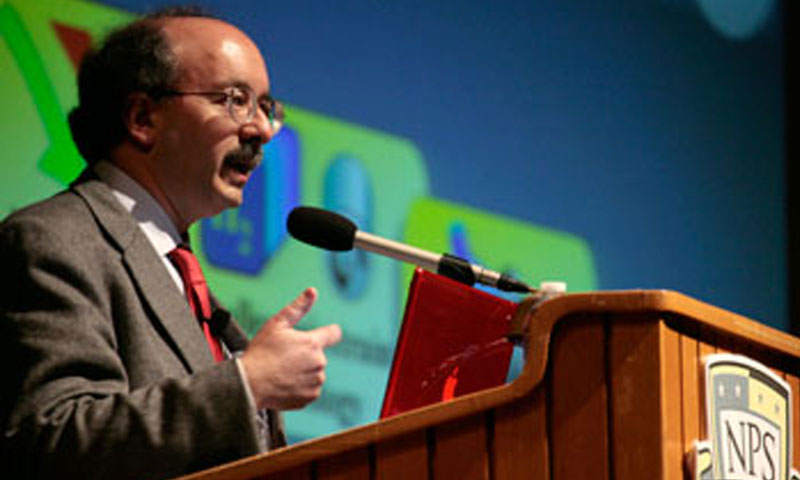 Amory Lovins, Chairman and Chief Scientist of the Rocky Mountain Institute, talks to NPS students, faculty and staff about “DoD’s Energy Challenge as Strategic Opportunity” during the Secretary of the Navy Guest Lecture in King Auditorium Tuesday, April 20.

If energy conservation was a competition, Amory Lovins is the man everyone would want on their team. He is one of the leading scientists in the energy community, and co-author of Winning the Oil Endgame: Innovation for Profits, Jobs and Security. His hope is for everyone to “win” by reducing our impact on the planet, specifically through resource consumption and emissions. He fittingly spoke as the Secretary of the Navy Guest Lecturer hosted by the Cebrowski Institute at NPS on April 20, just two days before Earth Day. Lovins has consulted with over 50 countries, 20 heads of state, the U.S. Departments of Energy and Defense and major businesses on ways to promote energy efficiency in buildings, transportation, resources and factories to create a cleaner, healthier planet.

In addition to being featured as one of Time magazine’s 100 most influential people in the world in 2009, Lovins is also widely known for his work with the Rocky Mountain Institute. “The Rocky Mountain Institute, which I co-founded in 1982, is an independent entrepreneurial non-profit think-and-do tank. Our mission is to drive the efficient and restorative use of resources.” He added, “We have spun off five for-profits. We work chiefly with the private sector. Most of our limited government work is with the military because we only like to work with effective institutions that can get things done. We do solutions not problems. We are practitioners, not theorists. And we do transformation not incrementalism.“

In 2004, when the Rocky Mountain Institute released Winning the Oil Endgame, Lovins received funding from the Pentagon, the world’s largest oil buyer, to outline a plan for making the United States oil-free through the use of modern technology and smart business strategies. “We’ve had a remarkable consistent vision of the kind of world we are trying to help create. Our current statement of that is a world thriving verdant and secure for all forever,” he said. “And the best way we know to do that is to create abundance by design. That is, turn scarcity by in-intention into abundance by design. By using a different kind of design called integrative design, to achieve very large savings of energy and resources.”

During his lecture, Lovins spoke about the importance of establishing efficient resources and methods in the battlefield. Dependence on an electricity grid and fuel supply is not only costly but leaves troops vulnerable to attack. While stationed in or near hostile territory, troops must worry about interruptions in supply, threats to fuel convoys, and navigating difficult terrain with limited resources. He notes an additional expense and safety risk in protecting the resources both in transit and on-site.

Lovins explained that by starting with methods that need the most change, such as those where soldiers’ lives are dependent on safe, efficient and reliable resources, the same methods can translate into the private sector over time. “We found that the Department’s mission has incurred a huge cost in blood and treasure and lost combat effectiveness due to the waste of energy throughout the battle space, and the almost complete dependency of fixed facilities on a very vulnerable electric grid. There are solutions to both of these problems. They create revolutionary gains in capability. The cost will be comparable or lower in capital and much lower in operations. No trade-off, no compromise.”

Lovins stated the key to protecting personnel and resources on the battlefield is to create methods that are both durable and resilient. Creating an enduring system for energy efficiency on land, air and sea will not only allow for greater range, but will also cost less to maintain. “With a more diverse, dispersed, renewable [energy] supply,” he said, “supply failure, whether by accident or malice, turns from inevitable by design to nearly impossible by design.”

Because two thirds of fuel use in a vehicle carries the weight of the structure, Lovins proposed that one way for the DoD to reduce cost and amount of fuel consumed is to streamline the design of land-vehicles used by troops. Doing this while improving the structural integrity and safety of military transportation vehicles by using new materials and radically simplified manufacturing is not only possible, he says, there is already a design ready for prototyping.

An automotive designer from Detroit designed an “expeditionary vehicle using integrative design that does MRAP [Mine Resistant Ambush Protection] class protection and lethality without the weight, without the instability, and without the fuel.” Added Lovins, “Part of what he does is de-couple the survivability of the crew compartment from that of the power propulsion cargo. That cuts the weight in half. He then does a very unconventional ultra-light armor for superior ballistic protection. It has a flow-through design for a blast from below and special materials that give it extraordinary IED resistance. In fact, the shell, which is molded, is slightly elastic and has tailored thickness in different locations which should dramatically reduce traumatic brain injury. It has a very low center of gravity. It has a number of unique agility and other features to facilitate that.”

Lovins offered closing remarks on the importance of future military leaders being open to the possibilities for creating a cleaner, safer, more energy-efficient military. “If anything I’ve said today seems too good to be true, just remember the remark by Marshall McLuhan that ‘only puny secrets need protection. Big discoveries are protected by public incredulity.”