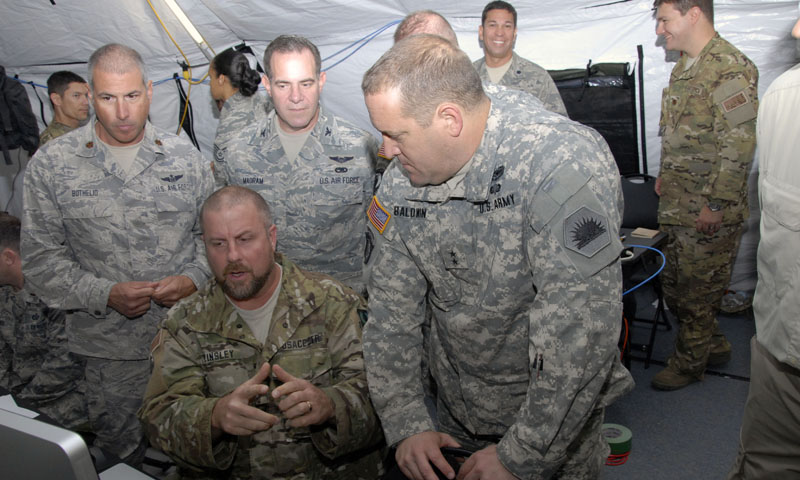 When men and women go into combat they accept a level of risk that is hard for people outside the profession of arms to comprehend. Still, there is one call that causes even the most seasoned veterans sleepless nights, the DUSTWUN.

DUSTWUN or Duty Status Whereabouts Unknown is every commander’s nightmare, but for the men and women of the 129th Rescue Wing, the DUSTWUN report is not just a bad dream. It’s a reality for which they train, prepare and innovate on a daily basis.

It’s a technology with countless applications, and is one that Anderson and his colleagues believe will make the 129th’s ability to rescue missing service members infinitely more efficient.

Anderson is a researcher with the Cold Regions Engineering and Research Laboratory. He is currently working with the U.S. Army’s Training and Doctrine Command Analysis Center (TRAC) at NPS to develop “information models” – or executable descriptions of interactive systems – within the Global Information Network Architecture, also known as GINA.

GINA is a “system of systems modeling environment,” a digital landscape wherein multiple applications, users and components are able to interact and behave through specified configuration as linked multi-dimensional systems.

That may sound like a lot of meaningless tech-speak, but for the men and women of the 129th it means that rescue helicopters area able to “speak” to fixed-winged aircraft; that decision makers in tactical operations centers are able to look through the helmet-cameras of rescuers on the ground; and that rescuers are able to share information, intelligence and information feeds from a host of disparate technologies and agencies.

GINA makes all of this coordination, information sharing and interconnectivity possible. It is an environment where stove-piped technologies become accessible to every other application within its domain. It brings together unrelated programs, components and data streams in a single architecture allowing for unprecedented levels of interconnectivity and cooperation.

“GINA technology represents both information and relationships among information as objects that may be repurposed to new configurations of systems and system behavior,” explained Anderson. “It is the key to actionable intelligence and just-in-time information for decision making.”

Traditional system technology is driven by code, programming, and billions of dollars to make it all work together. GINA is very different.

“The GINA environment is ‘agnostic’ … It takes components, programs and technologies and represents them within itself in a manner that is universal within the GINA environment, allowing for previously unseen levels of interoperability without the man hours and dollars generally spent to make stove-piped technologies work together,” said Anderson.

GINA researchers describe a platform that would encompass a Global Information Grid (GIG) composed of users, the components that they use, and data.  Every user, and every component (cell phone, tablet, computer, even traffic cameras) that is modeled in to GINA becomes a multi-dimensional object in cyberspace.

A semantic metamodel within GINA specifies the behavior and the relationships of the system components. Those components contain all the necessary information to conduct their specified processes and interactions. The emergent capabilities that arise from all of the related components within the executable GINA model are greater than the sum of their individual parts, whether they are new or legacy data systems or sources.

“The problem with all of these different systems is that they speak different languages … GINA does not require the end systems to be modified to talk to them, GINA is built to understand all of the various data inputs or ‘languages’ and then creates links and relationships,” said Ryan Hale, a network engineer and GINA expert in NPS’ Information Technology and Communications Services.

Researchers say the GINA world was born of necessity … As technology continues to evolve so rapidly towards ever-greater complexity, so does the programming that makes it work.

Today, there are thousands of stove-piped technologies that are becoming increasingly complex as they are upgraded and extended. With each layer of code laid over existing foundations, these applications and technologies become self-limiting as their inherent complexity begins to overwhelm machine and human capabilities to define and implement interactions.

GINA, as a configured system of systems architecture, not only exposes stove-piped systems in a common, easily understood way, but also uses a universal descriptive metaphor to wire their interactions in a manner that is not only obvious to the user and the developer, but also executable by the computer.

“GINA is able to take programs and devices and represent them in a way that is understood by every other represented application in the GINA environment. Configuring – not programming – creates relationships between the individual components so that stove-piped technologies become accessible and part of the greater GINA universe,” said Anderson. “GINA also incorporates aspects of cryptology into network capability … Although other networks can see GINA, they cannot decipher GINA objects.”

Butow and Magram learned about GINA while studying at NPS. In addition to the Soaring Angel exercise, they are supporting several other initiatives where GINA is a central aspect of the architecture, including interagency emergency response collaboration within Silicon Valley, and an intelligence and information data fusion effort with federal, state and local authorities working with the California National Guard’s counterdrug task force.

The 129th Rescue Wing, as its name suggests, is an Air Force Combat Search and Rescue (CSAR) Wing. It combines both fixed and rotary wing aircraft and associated medical and special operations professionals into a single globally deployable organization. The 129th’s mix of technology and personnel make it the perfect GINA operational laboratory.

The 129th is also important to the GINA project, because like other National Guard units, it wears two hats. The 129th supports overseas contingency operations as part of it’s Title Ten commitment to national defense, but as a guard unit, it also provides defense support to civil authorities. The dual nature of National Guard units make them ideal when it comes to testing GINA technology successes in both homeland defense and overseas operations.

In a unit where the ability to view, process and utilize information can be the difference between life and death, a system like GINA has potentially life altering implications. GINA allows for the interoperability of unrelated systems and advanced decision matrix databases critical to the kind of operations simulated in the Soaring Angel exercise.

“[The Soaring Angel Exercise] is simulating timely responses to encounters with insurgents [in Eastern Afghanistan] and is focused on the recovery of wounded personnel,” said Soaring Angel planner, California Air National Guard Lt. Col. Jason Funk of Pacifica, Calif. “We have to be able to get out there, get them packaged and get them to medical personnel within the ‘golden hour’ where life saving measures are more likely to succeed.”

This kind of timely, multifaceted response is critical to 129th operations at home and abroad. It allows rescuers to “control their domain” in areas where control has broken down and chaos threatens operations.

“Because of GINA’s flexibility we are better able to control our domain … we are able to tie our various data feeds together and link information,” said Magram. “On the operational side, we are able to turn GINA into a massive mission critical database, with the ability to access information must faster than separate stove-piped systems.”

But the ramifications of the GINA environment go further than databases and command and control. Dave Tinsley, an Engineering and Research Development Center partner embedded with the 129th, is helping Butow, Magram and the wing’s special forces assets to utilize GINA in personnel rescue operations and to conduct kinetic operations planning.

“GINA can help us to reduce kinetic conflict, because you can reach out and touch others by other than kinetic means,” said Tinsley. “ Techniques such as game theory can be incorporated into GINA models in order to establish a Nash Equilibrium, or optimal course of action, for everything from enemy actions to mission success and morale. What is significant about what we are doing at this event is that we are pushing the tactical envelope. Advancements in effects-based operations at this op-tempo will contribute greatly to the spectrum of the warfighter and rescue community.”

These enhanced abilities are critical to organizations like the 129th that rely upon disparate technologies and their associated hardware and software to conduct rescue operations during complex state-side catastrophes, to interdict drug runners, and to deploy to hot spots like Eastern Afghanistan.

“Based on the model we created, we were able to see an operating picture that captures the various elements, personnel, vehicles, aircraft and sensors that we have defined in the model, those elements are illustrated as icons, with the click of a button, the icon is replaced with a live feed [video] from the man on the ground, providing clear situational awareness and command and control at a level that is rarely seen in the field,” said Hale.

But, If the 129th is to be successful, it must not only see, but also make sense, of unique data streams. That’s where GINA’s higher functions come into play.

“GINA enhances the cognitive toolset for the decision maker, it allows us to focus on what’s important, reconfigure quickly along with a developing mission, and be a more agile and capable combat and civil support organization” said Magram.

“Enemy reporting, cell phone towers, live video feeds and compiled databases, amongst other things, lead to the creation of a ‘mental map.’ GINA enables cognitive enhancement, it knows all the parameters that you are looking for according to the GINA model that it is utilizing, which facilitates better, quicker decision making and command and control,” said Anderson.

U.S. Navy Lts. Jakub Nowakowski of Portland, Ore. and Daniel Ciullo of Orlando, Fla. are working with Anderson to create a metamodel that will help the Navy to evaluate new technologies.

GINA models can be created to identify specific threats, data packages, profiles etc., but models can also be built within GINA to answer cognitive questions about weapons systems or approaches to specific problems within the GINA environment.

“We created a class with the aim of discerning the optimal way of utilizing new technology by incorporating a GINA metamodel,” said Nowakowski.

The model takes the specifications of new technologies, like the airborne laser system or unmanned aerial vehicles, and seeks out areas where these technologies answer questions posed by a requirements matrix, also defined in the metamodel. This allows commanders to see where a particular technology is more apt than another to meet mission accomplishment requirements.

GINA is not a cure-all and is still evolving. But if fully utilized, it may very well revolutionize the way disparate technologies come together, enabling military innovators like those in the 129th Rescue Wing to bring our heroes home from battle, and to protect those of us who stay behind.