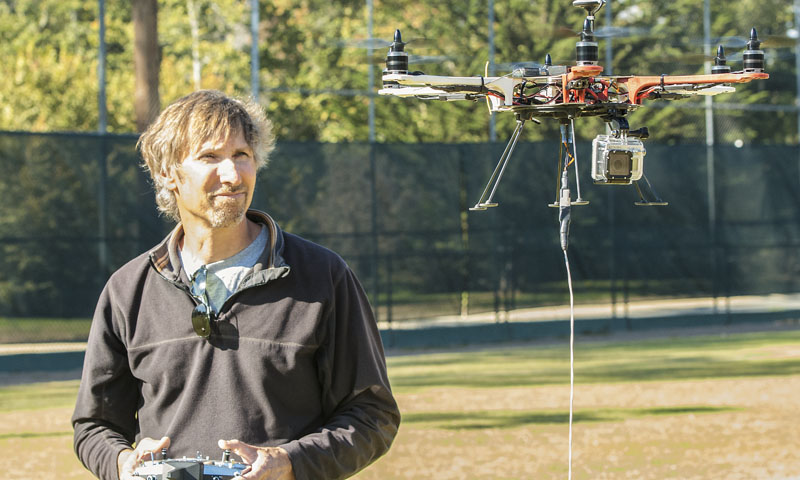 Naval Postgraduate School Research Associate Professor Kevin Jones is pictured with his tethered hex-rotor. Working with his research partners from the National Security Agency and Lawrence Livermore National Laboratory, Jones is developing a hex-rotor that overcomes the power problem associated with rotary aircraft by offering a tethered alternative.

Several of their most intriguing concepts – such as the Tactical Long Endurance Unmanned Air System (TaLEUAS), and their Air Mobile Buoy Platform – seek to fill operational gaps by placing advanced, endurance-focused and renewable-energy powered aircraft into the sky.

The TaLEUAS tethered hex-rotor aircraft, for example, will be capable of extremely long-endurance operations, and can work in conjunction with sister aircraft to perform missions with very little human command and control.

“I want it to be a ‘back packable’ system that can stay up for days or months autonomously. Humans interact with it, but do not control the aircraft,” said Jones, a member of NPS’ Department of Mechanical and Aerospace Engineering.

To date, attempts by industry and other researchers to create an aircraft similar to TaLEUAS have failed, and are indicative of the challenges ahead.

“The government has funded projects that are similar, but they were enormous, expensive and subject to weather,” said Jones. “Our concept already shows promise and could be built for $30,000 or less.”

NPS student, Mexican Navy Lt. Nahum Camacho, has been working with the team to improve the “energy budget” that will help make their TaLEUAS performance goals a reality.

“We have a highly-efficient platform, it’s essentially a glider that harvests energy from the sun in two ways,” said Camacho. “During the day we rely on thermal soaring. We achieve this by using on-board sensors to locate thermals, and once found, we can fly like a large soaring bird without expending energy. The energy that we save is then routed to sensor packages and other instruments.

“We also use solar cells to gather energy. Other research projects have focused solely on either thermal soaring or solar energy, our combination of the two gives us the opportunity to create an aircraft capable of 24-hour flight,” continued Camacho.

Jones is now working with the makers of TaLEUAS’ airframe to incorporate solar cells into the wing of the aircraft.

“You have to be very careful when taking this approach because anything you add to the airframe affects its aerodynamics. That is why we are embedding solar cells into the wing of the aircraft during original manufacture rather than adding them on to the exterior of the wing,” said Jones.

Building upon the work of a former Swedish student at NPS, Klas Andersson, the team is now looking at the deployment of multiple TaLEUAS aircraft in an attempt to time-share the task of seeking out energy-saving thermals.

Building upon the work of a former Swedish student at NPS, Klas Andersson, the team is now looking at the deployment of multiple TaLEUAS aircraft in an attempt to time-share the task of seeking out energy-saving thermals.

“Since finding the thermal is the challenge, if you have two gliders, they can search together and share the workload. If you increase that to ‘N’ number of gliders, you can start to map out thermals over an entire area,” said Jones “Our idea is to launch tens or even hundreds of gliders, in order to time-share these mission requirements.”

Also of interest to Jones is the use of hex-rotors for sensing and surveillance. Working with his research partners from the National Security Agency and Lawrence Livermore National Laboratory, Jones is developing a hex-rotor that overcomes the power problem associated with rotary aircraft by offering a tethered alternative. 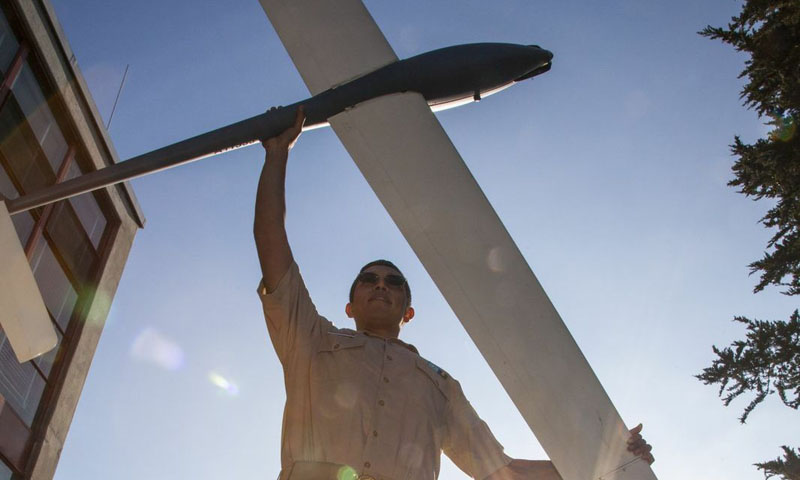 “The challenge is to get a lot of power over a long skinny cable,” said Jones.

A tethered hex-rotor poses several advantages, Jones says. They are inexpensive, easy to operate, can be deployed quickly. And because they are tethered, they are not subject to Federal Aviation Administration restrictions.

“There is a lot of interest in the law enforcement and intelligence communities because a tethered hex-rotor gives near immediate eyes in the sky,” said Jones.

“Tethered hex-rotors could also serve as easily deployable relay or mobile cell phone towers in the wake of a natural disaster,” he added, emphasizing the possible humanitarian assistance and disaster relief (HADR) applications of the concept.

Perhaps the team’s most novel UAV concept is their Air Mobile Buoy System, an innovative platform that utilizes a seawater and solar powered multi-rotor.

He insists that his floating multi-rotor offers both stability and elevation by launching its antenna-equipped airframe skyward for up to 10 minutes where it can send or receive transmissions before returning to its initial position or deploying to a more advantageous location. Additionally, the buoy system could be used to move sensors to optimal intelligence gathering positions without human intervention.

As with the TaLEUAS platform, the team hopes to utilize a series of floating multi-rotors to time-share mission requirements and enhance the buoy’s capabilities.

“CRUSER has a mandate to break the single-platform, single-domain paradigm. The Air Mobile Buoy Platform concept offers us the opportunity to explore a system that can operate in all three maritime domains [air, surface and sub-surface],” said CRUSER Director Dr. Ray Buettner.

Buettner also noted that the concept has the potential to overcome a series of intelligence and tactical challenges unique to the maritime environment.

While these systems are at various stages of research and development, their potential operational utility, and the educational and research opportunities that their development presents to students, have generated a great deal of interest at NPS and beyond.