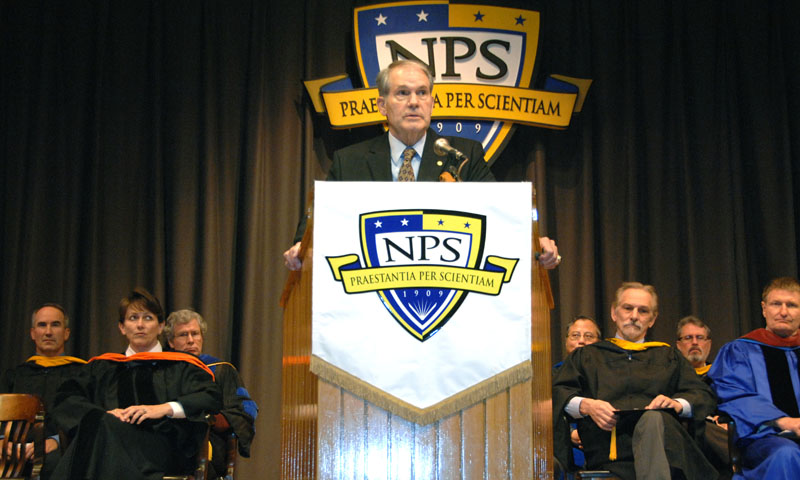 "The Naval Postgraduate School is graduating another class of well-educated officers who are capable of critical thinking, problem solving, and succeeding at a much higher level than they were before entering our doors," said Tighe. "Because of the vital work you have accomplished on behalf of this institution, our nation, and nations around the world are safer today."

Tighe’s remarks were followed by those of guest speaker, retired U.S. Army Lt. Gen. Robert L. Ord III. Ord has long ties to NPS. He is a former Dean of the NPS School of International Graduate Studies, and served as a distinguished senior fellow at NPS’ Center for Civil Military Relations. He was also the founding director of school’s Global Center for Security Cooperation prior to retiring from active federal service in 2009.

Ord both questioned and challenged the graduating class, sharing leadership lessons and humorous anecdotes from his illustrious 38-year military career.

“Who is your hero, who is it in your life that you are trying to be like … And whose hero are you going to be?” asked Ord. “When in command, take command, lead, follow or get the heck out of the way.”

"One of the privileges of getting promoted is that you have the opportunity to help, to mentor, to coach and to be a role model for those under you and those that work for you," said Ord.

He encouraged the graduating class to show humility, illustrating his point by describing his wife’s humorous response to learning about his own promotion to brigadier general.

“’Honey, did you ever believe in your wildest dreams that I’d be a general officer?’ To which Mrs. Ord replied, ‘You’ve never been in my wildest dreams,’” quipped Ord. “Humility begins at home,” he added.

Ord offered advice drawn from his own career, and that of past military leaders. “Seek the tough jobs, volunteer for the tough missions and be the one to step forward when presented with a challenge,” he said. “Serve as high or as a low as you can in an organization … If you can't put your boots on the deck plates, then go to the Pentagon, cherish your time with Soldiers, Sailors and Marines, and make a difference.”

And finally, Ord reiterated that a military career is a call to service.

“If you do not have it in your heart to care about people, than you are in the wrong business … The uniform you wear is a badge of servitude, a badge of servitude to the Constitution, to the nation and to each other … We on this stage have confidence that you will serve with dignity, respect, humility and with a focus on people.”