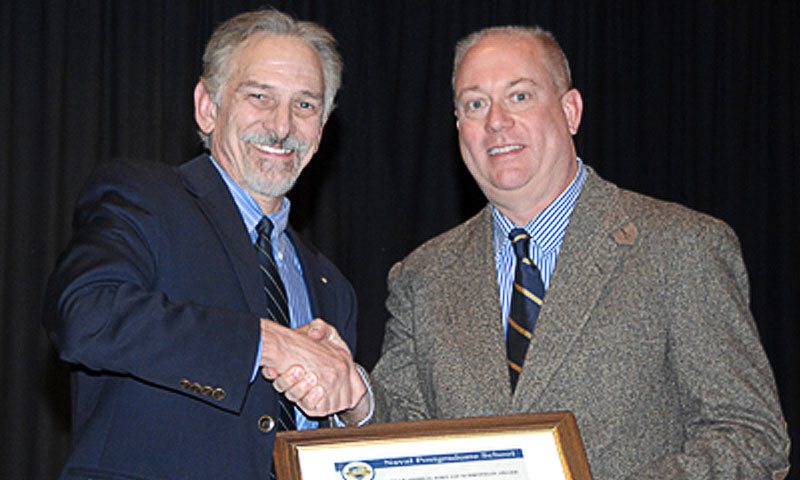 E. Cory Yoder, a retired Navy commander turned Senior Lecturer for the Graduate School of Business and Public Policy (GSBPP) at the Naval Postgraduate School (NPS), received the Admiral John Jay Schieffelin Award for Excellence in Teaching, the most prestigious teaching award at the school, during the spring graduation ceremony at NPS.

“I am elated to get the award,” said Yoder, “knowing the criteria to even be nominated.”

Criteria that Yoder knows very well, having been nominated four times, consecutively, and placing in the top five percent of the balloting each year before finally receiving the award on his fifth nomination.

A unique characteristic of the Schieffelin award is that the nominees are selected, primarily, by the students they teach. Yoder’s four nominations and subsequent win speak volumes of his work with the student body at the school.

Another significant aspect of the award is that it isn’t a ‘one-shot’ effort, but the success of consistent effectiveness in his work as a teacher, added Yoder.

“I want to make learning challenging, but also fun and memorable,” said Yoder, himself a 1993 graduate of NPS. “I want the students to get something out of my teaching and be able to use the tools that they learn within and beyond their military careers. I don’t want to give training, but rather critical thinking skills at the tactical, operational and strategic levels of military acquisition and contracting.”

Yoder said he wanted his students to focus not just on their next tour, but to acquire the tools to enable them to become future flag officers.

"My primary focus, since day one of my arrival, is the NPS institution,” said Yoder. “I strongly believe in our mission and the empowerment it provides our stakeholders,”

Yoder joined NPS as a military faculty member in 2000 and, after retiring from the Navy, became part of the permanent faculty as a civilian. He performs multiple duties as a member of the faculty, and has participated and contributed considerably on projects and programs over the years.

Yoder attributes much of his successes during his long career – on assignments for the Navy, DoD and NATO and as a professor – to his time as a student at NPS, attended the school from 1992-1993, receiving a Master of Science in Management.

Yoder was in good company during his previous time at NPS. He was a student of Dr. David Lamm, and current GSBPP Dean, Dr. William Gates, served as his thesis advisor … both prior Schieffelin Award winners.

Yoder recalls the transformation he experienced from the moment he started at NPS, the commitments required to succeed as a student. He also emphasized the commitment his instructors had, and that it was instrumental to his success. He notes, “I want to deliver the same commitment.”