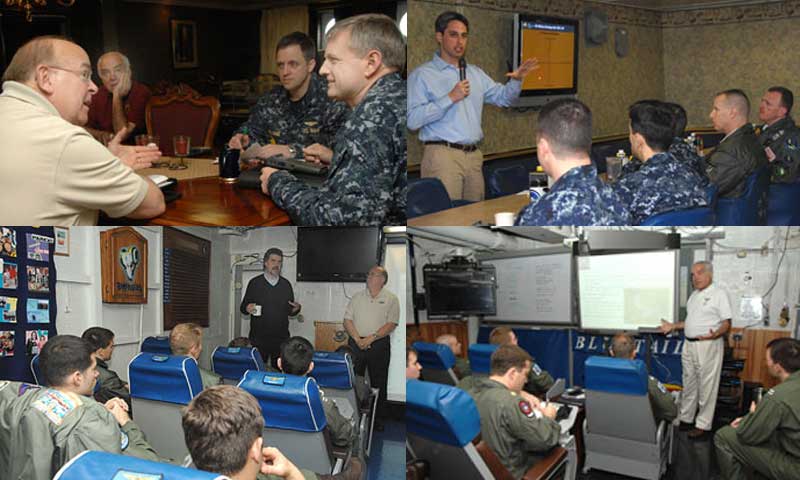 When leaders of deployed U.S. carrier and expeditionary strike groups want to gain a better understanding of the cultural and security challenges they may face overseas, the Naval Postgraduate School's (NPS) Regional Security Education Program (RSEP) sends teams of professors and regional experts to deliver graduate-level briefings at sea.

The program, which was established in 2002 as a result of the USS Cole investigation, is intended to enhance the operational mission of strike groups by providing cultural, historical and security contexts of the regions in which they deploy.

RSEP teams have visited every U.S. carrier strike group, and in just the last few years, they have reached more than 150,000 participants worldwide. Additionally, RSEP has seen a growing demand for the program's curriculum. Since 2005, the number of RSEP trips per year has more than doubled.

The team spoke to officers and senior enlisted personnel about U.S. security strategies in the Middle East, cultural awareness and diplomacy, Islam and Islamic fundamentalism, Middle East conflicts, and regional insurgencies. To ensure every Sailor had the opportunity to view the briefings, they were also recorded and broadcasted on the Eisenhower's television system.

"Having the RSEP team aboard the ship is a fantastic asset," said Eisenhower's Executive Officer Capt. Ted Williams. "These professors bring a wealth of knowledge that you just couldn't get through a slide presentation . . . I'm amazed at their level of expertise and how our Sailors have been able to glean as much information as possible from them."

Lt. Cmdr. Robert Pedre, a surface warfare officer for the United Kingdom Carrier Strike Group who was training aboard the Eisenhower, thought the RSEP briefings were tremendously valuable. "I think it's critical that we understand the historical and cultural context of the countries in which we are operating to ensure the effectiveness of those operations," he explained.

Pedre said the British Royal Navy also has a program similar to RSEP, but plans to brief his commander about NPS' program when he returns.

"Feedback for the program is overwhelmingly positive," Loeffler commented. "In some of the first deployment briefs the strike groups have given to Navy leadership at both the fleet level and in Washington, they've mentioned RSEP very positively and the impact that it had."

Loeffler also pointed out that while RSEP provides an important service to the fleet, it also provides unique learning experiences for the civilian professors and instructors who deploy with the strike groups.

Ghoreishi, a seasoned RSEP instructor who retired from the National Security Affairs Department in 2003, has been on more than 30 RSEP missions since the program's inception. He enjoys participating in RSEP, because it gives him a better understanding of the Navy's culture. "I think it's very educational for me . . . on every trip, I learn something new," Ghoreishi said.

For Freeman, a first-time RSEP lecturer, teaching aboard the carrier was a new and challenging experience. But despite the change in environment, Freeman said the students and curriculum were not all that different. "In the classroom at NPS, we have to make the lectures practical and useful to people in combat. I think that's the same case here [aboard Eisenhower]. It’s really an extension of what we do on campus," he explained. Freeman also noted that Eisenhower's officers and senior enlisted personnel were much like those at NPS - enthusiastic and eager to learn.

Rook, the Chair of Towson's History Department, has served on two previous RSEP teams and was introduced to the program by colleagues from the U.S. Naval Academy. "I think this program is a really wonderful idea in terms of bringing expertise out into the fleet and helping enlisted and officers become a bit more comfortable about the areas and topics they're going to be encountering," he said. "I'm very pleased to be a part of it."

One of the benefits for Rook, who teaches military history and U.S. security strategy, is that the program has helped him gain exposure to military culture. By spending time aboard deployed ships, he has gained a better understanding of the technical and institutional practices unique to the armed forces. "It's a win-win situation. I bring something out to the fleet, and I also take away a tremendous wealth of experience that I hope makes me a better professor in the classroom,"he explained.

Ghoreishi agreed, and said the experience and knowledge professors gain through RSEP make them better prepared to teach security topics as well as military students. "I think it's very good for the faculty of the Naval Postgraduate School to come on these sorts of missions to really get to know the Navy people better and what they're doing," he said. "We learn more this way and become better teachers, so it works both ways - we educate them and they educate us."