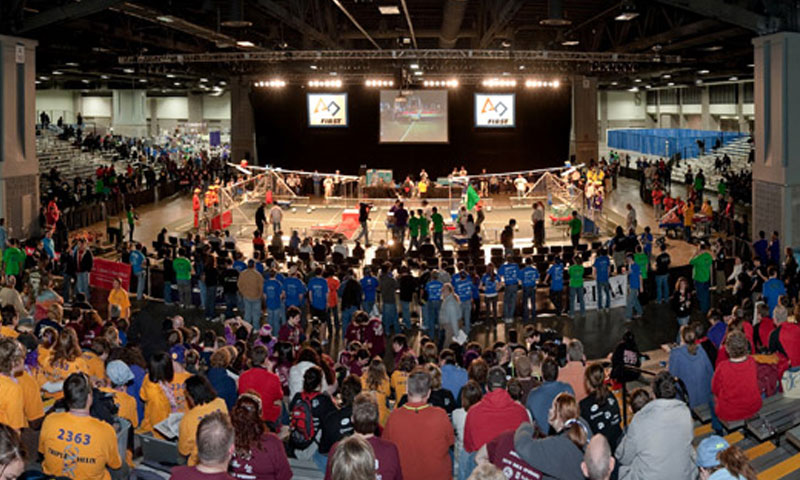 A view of the FIRST Robotics Competition in Washington, D.C. on Mar. 23 displays the 65 teams competing in the event. The robots are designed and built by teams of young people with the help of a mentor. FIRST competitions like these offer scholarship opportunities to get young people involved in the STEM fields.

The Naval Postgraduate School (NPS) has long been vested in the STEM – or Science, Technology, Engineering and Mathematics – disciplines, not only for the thousands of military officers and DoD civilians who have crossed the stage in King Auditorium, but also for the dozens of young adults interning across campus at any given time. NPS alumni see first-hand the value of education in these technical arenas.

For graduate Walt Havenstein, however, promoting the sciences is both his day job, and his free time. Havenstein is the Chief Executive Officer of Science Applications International Corporation (SAIC), which uses scientific, engineering and technology applications to solve real-world problems. He also serves as the Chairman of the Board of Directors of For Inspiration and Recognition of Science and Technology (FIRST), a not-for-profit organization founded to inspire young people's interest and participation in science and technology.

During his 12 years serving on active duty in the Marine Corps, Havenstein received his bachelor’s degree in aerospace engineering from the U.S. Naval Academy, and went on to get his master’s degree in electrical engineering from NPS in 1977. He transitioned to the Reserves in 1983 and began his work as a civilian in the defense industry.

With national security being one of their key areas of focus, SAIC works frequently with the Department of Defense (DoD), the Department of Homeland Security (DHS) and other departments of the U.S. government. But their work also extends to a wide range of global problems, from public health issues to protecting critical infrastructure, all of which heavily rely upon the STEM fields.

“Many of the solutions to national problems, and ways to improve our lifestyles here in the United States and around the world, come from science, technology, engineering and mathematics,” explained Havenstein. “Virtually all of our standards of living are based on invention and innovation that start with a fundamental understanding of science, the application of science through engineering, and inevitably, mathematics. Whether it’s the house you live in, the water you drink, the energy you use, or the healthcare that we take for granted, all are based on solutions or inventions that came from the application of basic science and mathematics.”

Naturally, as the STEM workforce ages, the need for fresh young faces is constant. For the past 15 years, Havenstein has worked closely with FIRST to help inspire new generations of scientists and engineers through programs and competitions for young people around the world.

FIRST provides mentor-based STEM programs and support to kids K-12, emphasizing the value of their achievements and providing opportunities for college scholarships. Havenstein has a noticeable passion for FIRST, noting that there should be an emphasis on the STEM fields in much the same way sports are encouraged at an early age.

“If you are going to inspire young people to want to deal with the rigors of these academic disciplines, you have to capture their imaginations relatively early in life, and reinforce that imagination by making what I will call heroes out of scientists and engineers, the way we do out of athletes.”

When Havenstein took his position at SAIC in 2009, he brought his excitement for FIRST with him, garnering support throughout the company, and adding new volunteers and mentors to the roster. The collaboration allows SAIC to give back to their community by providing young people with an academic coach to help in their projects.

One of FIRST’s widely recognized projects, First Lego League (FLL), allows kids to build Lego-based robots to perform specific tasks in competition. Paired with a mentor, each team gets the chance to apply math and science to the task of designing, building, testing and programming the robots. The challenge encourages the teams to think like scientists and engineers while boosting their confidence in their own technical abilities.

Through programs like the FLL and the First Tech Challenge, students can compete for one of over 900 scholarship opportunities available. Many of the competitors have even met with President Barack Obama, whose Educate to Innovate campaign, launched in 2009, has the same goal as FIRST. A few FIRST teams were invited to attend the White House Science Fair late last year, representing the program with a robot that plays soccer, and a steering wheel cover that monitors safe hand positions while driving.

“Reaffirming and strengthening America’s role as the world’s engine of scientific discovery and technological innovation is essential to meeting the challenges of this century,” announced Obama upon debuting the campaign in 2009. “That’s why I am committed to making the improvement of STEM education over the next decade a national priority.”

The goal, Havenstein explained, is to make children and young adults aware of the opportunities available in the STEM fields, and to give them a chance to excel and be recognized for their efforts and abilities. In his work with scientists and engineers through SAIC, and from his own experience in the field, Havenstein understands the potential in having so many fresh, new perspectives, and in shifting the way young people view the sciences.

“We don’t solve our problems in the media, or in the entertainment world, or in sports and leisure,” said Havenstein. “The vast majority of issues that we face everyday get solved by the application of science, mathematics, engineering and the adoption of technology.”