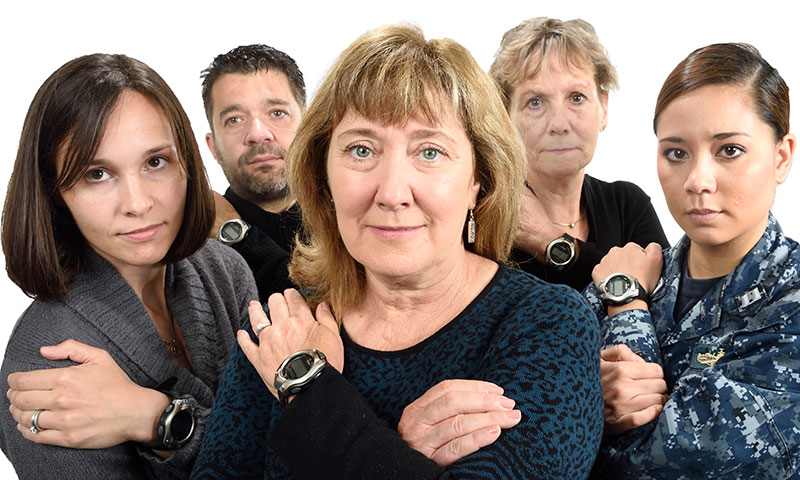 NPS Associate Professor Nita Shattuck, pictured center with current members of her research team, has studied non-standard watch and rotation schedules for several years. Her goal is to optimize crew performance by matching sleeping patterns to the body’s natural rhythm.

Naval Postgraduate School (NPS) Department of Operations Research Associate Professor Nita Shattuck has led a long line of NPS students on a mission to improve the lives of their fellow service members around the world. For more than 15 years, she has devoted herself to a singular task … ensuring service members get enough rest to perform their best, especially when they are deployed and must deal with potentially life-threatening situations.

“Sleep is critically important to crew performance and combat effectiveness. There is often more work than crews can handle in a normal workday,” said Shattuck. “With reduced crew sizes, personnel must work even longer hours and sleep is generally the first thing to be sacrificed.

“We want to help decision-makers balance cost, performance and risk. They need to understand the implications of how their decisions affect the warfighters,” she stressed.

Shattuck’s research is based on a simple concept … the human body cannot learn to overcome sleep deprivation. With this in mind, Shattuck and her team have been monitoring the sleep schedules of Sailors on a variety of ships and submarines for more than a decade, and suggesting alternatives to traditional watch rotations. And though Shattuck may not be the first to challenge the way Sailors work and sleep, she has the empirical evidence and the scientific acumen necessary to back up her recommendations.

“The average workday [while underway] is 11-12 hours. When you add watch standing duties, many Sailors are working more than 14 hours a day,” said Greek Navy Cmdr. Panagiotis Matsangas, one of Shattuck’s former Ph.D. students. “The goal is to increase the operational performance of the ship, and you can do this by doing one of two things … You can buy stuff for millions of dollars, or you can take our approach and optimize the organizational structure of the ship. Our way costs much less and it is easier to do.”

Along with collecting data about watch standing, Shattuck’s team collects data on other factors that interfere with crew rest, such as long lines at shipboard dining facilities and “special evolutions” that are often part of shipboard life.

"When you take people to the ragged edge of fatigue, you have health and emotional consequences,” said Shattuck, who adds that sleep deprivation leads to a host of problems including increased risk taking, poor communication skills, and even moral impairment

“Sleep deprived people are more risk taking, because despite the fact that they are not able to think clearly, they believe that they can,” Shattuck explained. “In his altered state, a drunk believes that he is safe to drive, but too often, the results are disastrous … [Similarly], the sleep deprived brain is unable to judge its own level of impairment.”

“The frontal lobe in your brain helps you to make good decisions. When you are sleep deprived, your frontal lobe is not active, ” added Research Associate and Navy Reserve Lt. Stephanie Brown.

Although Shattuck did not serve in the Navy, she has spent a considerable amount of time at sea where she has worked to get to know the men and women whose sleep patterns she has been studying. In one of her more recent studies, she was invited by a former colleague to study crewmembers on board an aircraft carrier, conducting a three-phase study of personnel in the nuclear reactor section, where specialized training compounds the importance of retaining these qualified personnel.

“Sailor retention poses a serious problem to the fleet and is a chronic and recurring problem in the surface warfare community,” said Shattuck. “Each Sailor who chooses to leave the Navy represents a substantial loss to our force— so improving their work conditions is an easy way to help with retention.”

“It is very costly to educate and train the nuclear reactor department personnel, so it is important to take measures to retain them,” added team member and NPS Research Associate Jane Barreto.

Shattuck’s experimental process was pretty consistent … Her team of students outfitted volunteers in the nuclear reactor department with sleep journals and watch-like devices called actigraphs. The devices measure the sleep patterns of their wearers and test reaction times at set intervals over days, weeks and even months. During a similar study of personnel on a Navy destroyer, one commanding officer wore an actigraph for six straight months, averaging less than five hours of sleep per night.

While the evidence for a changed watch standing schedule is mounting, Shattuck realizes that in order for things to change, there must be a culture shift throughout the fleet – a shift, she says, like the one made by the aviation community years ago.

“The aviation community has emphasized the important of crew rest for a long time. They have recognized that they have a duty to safety because the margin for error in their community is small and the consequences of a mistake can be both costly and deadly,” said Shattuck.

In addition to her work analyzing at-sea watch rotations, Shattuck has worked with both the Army and the Navy to enhance recruit performance and with the U.S. Military Academy at West Point to improve cadet sleep schedules. She is also currently working with the White House's Emergency Operations Center and with the U.S. Marine Corps to document the sleep patterns of security personnel throughout the world.