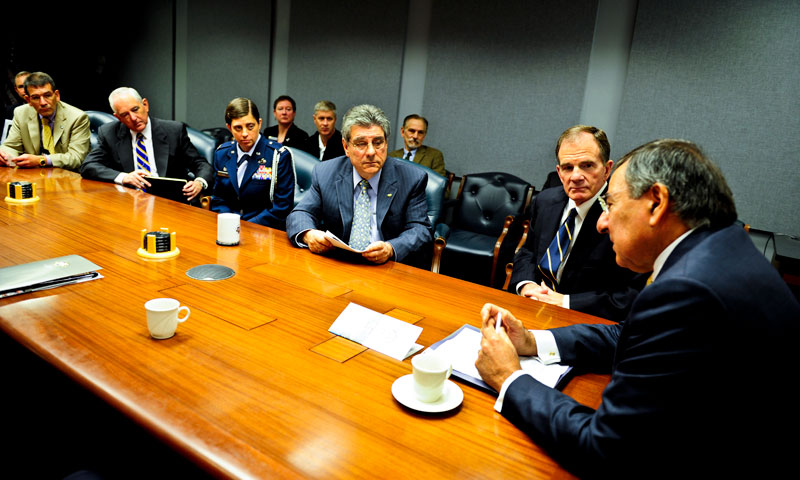 “This is a special place for me. And in many ways, it’s coming home,” said Panetta. “I am very proud of the Naval Postgraduate School … proud of its mission and proud of its dedication to protecting this country.”

In his address, Panetta touched on the current budget challenges facing the Department of Defense, the value of NPS to national security, and the invaluable roles of the men and women in uniform to DoD's mission. Panetta recalled his days growing up in Carmel, Calif., as a son of Italian immigrants who had dreams of creating better lives for their children. He also spoke about the realization of that dream through his own story – a 'small town guy' who would become Secretary of Defense – and the path the U.S. needs to maintain in order for that dream to be possible for future generations.

“As Secretary of Defense, obviously I look at the myriad challenges that face this country – a range of security challenges that come from a lot of different directions,” he continued. “As a result, [we] require the kind of leaders who are knowledgeable, who are creative, who are strategic, who understand the steps that have to be taken if we are to protect this country.”

Panetta was sworn in as the 23rd Secretary of Defense on July 1, after serving as the Director of the Central Intelligence Agency, and before that, Chief of Staff for President Bill Clinton. Panetta has also been active locally, with 10 years as co-director of the Leon and Sylvia Panetta Institute for Public Policy at nearby California State University, Monterey Bay. With his decades of experience in public policy and government service, Panetta understands the challenges facing the country and the defense department, which he spoke about in his address to the NPS community.

“We now are dealing with cyber threats, another challenge that confronts us. In many ways – I’ve said and I believe – this is the battlefield of the future,” he said. “We are now the target of literally hundreds of thousands of attacks every day … and I truly believe that, as that technology increases, as that capability increases, the ability to paralyze this country is very real. To take down our power grid, to take down our financial system, to take down our government, to create the kind of paralysis that would indeed be comparable to a Pearl Harbor kind of attack – we have got to be ready. Not only to defend ourselves, but to be offensive in being able to go act when people threaten our country.”

Panetta also addressed current budget concerns, and what Congress is discussing as a solution to the deficit that threatens the defense budget. Several questions posed by students and faculty addressed these same concerns, and their impact on defense capabilities in the future.

“Having worked on budgets for a good part of my career, I am not one who believes you have to choose between fiscal responsibility and national security,” he said. “I think we can implement fiscal discipline in a way that protects national defense. And that’s what we are working to do.” 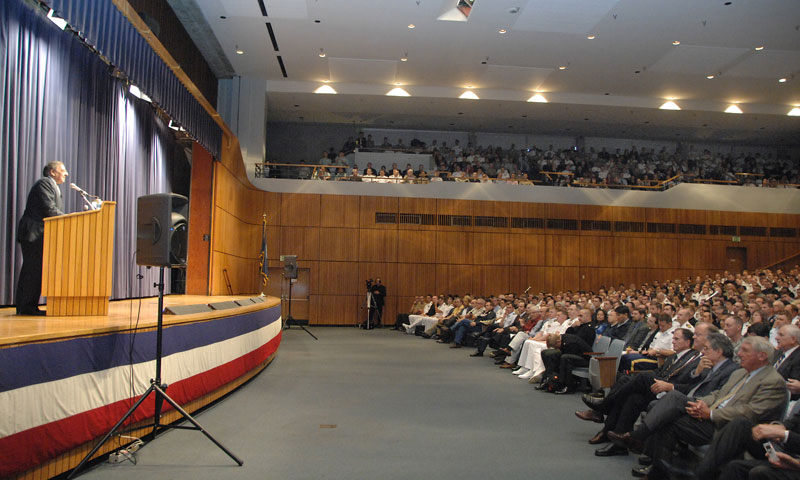 U.S. Secretary of Defense Leon Panetta addresses students, faculty and staff in a standing-room-only King Auditorium during his Secretary of the Navy Guest Lecture, Aug. 23 on the NPS campus.

Panetta emphasized the pride he felt for the success of the mission to take down Osama Bin Laden, which he noted was a joint effort by the military and intelligence communities. But, he warned, Al Qaida continues to threaten the security of the United States, and its troops. He spoke about the importance of being ready to fight for our national security, and to continue the mission that so many members of the Armed Forces have given their lives for.

“Just over the last few weeks that I’ve been Secretary of Defense, I’ve gone out to the war zones, [and] looked the troops in the eye. I’ve been to Walter Reed and seen those who have been terribly wounded as a result of those wars,” he explained. “I’ve been to Dover to greet the bodies of those who were killed in the helicopter crash in Afghanistan, and I’ve been to Arlington.

“The greatest inspiration to me has been that, when greeting the families of those who have died in service to their country,” he continued, “there isn’t a family member who hasn’t come up to me and said, ‘If you really care about what happened to my son, my daughter, my brother, my sister, my husband, my wife … If you really care, you will carry on the mission that they gave their life for.’”

In his time as co-director of the Panetta Institute, Panetta was a frequent visitor of NPS, and has been a longtime supporter of the mission of the university in educating military officers at the graduate level. He noted that, as he settles into his new role, there will be no question that NPS has support in Washington.

“I think NPS is absolutely essential to our national defense,” Panetta explained. “We’re dealing with incredibly complicated new technologies in war – new weapons, new cyber threats, some of the most remarkable stuff that we’ve ever seen. And our ability to have young men and women who are smart, who have the skills, the creativity, and the strategic thinking necessary to be able to use those kinds of new technologies is what’s going to make the difference in terms of whether or not we’re on the cutting edge, or the back edge in the future.”

In closing, Panetta reiterated the importance of a free country, and the willingness to protect it from potential adversaries. He noted that one of the strengths of the United States military, which he proudly regarded as the best in the world, is that the country has a volunteer force with men and women who know they have the support of defense leadership. Panetta stressed that in his role as Secretary of Defense, he is ‘100 percent’ behind the troops and their families as they sacrifice for the freedoms afforded in this country.

“We bless ourselves with the hope that everything is going to be fine in this country,” he said. “But very frankly, it doesn’t mean a damn thing if we’re not willing to fight. You, by your presence here, makes very clear that you are willing to fight for that American dream that brought my parents to this country, for the dream of making sure that our children have a safer, better life in the future, for the dream of making sure that we always keep in our hearts, the sacrifices of those who gave their lives for this country. But most of all, that we always fight to ensure a strong government of, by and for, all people.”