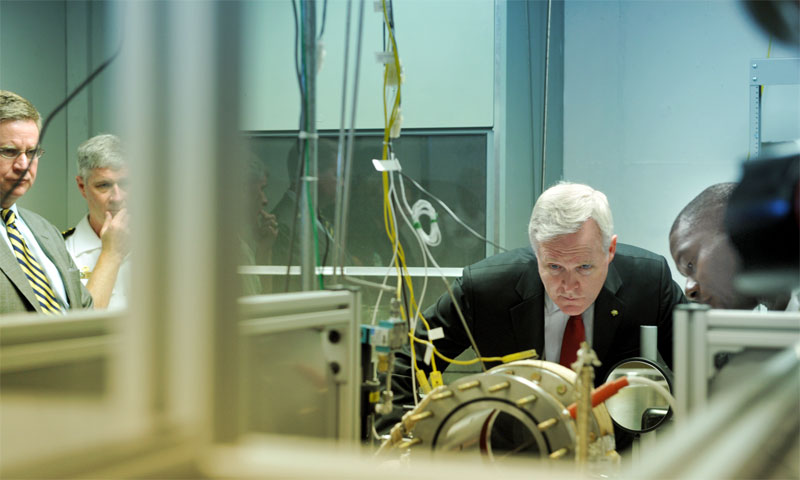 Lt. Omari Buckley, a student in the Mechanical Engineering curriculum, demonstrates the capabilities of NPS’ Biofuels Testing Facility to Secretary of the Navy Ray Mabus, left, during a visit to campus, Aug. 29.

U.S. Secretary of the Navy Ray Mabus took to the stage in King Auditorium, Aug. 29, to discuss the Navy's energy initiatives, and to announce NPS' contributions to those efforts through the establishment of new, groundbreaking educational programs dedicated to energy technology and policy. Mabus, the 75th Secretary of the Navy, is known for being a strong supporter of education – both military and civilian – and tapped the expertise at NPS to assist in creating the necessary leaders to achieve his goals for an energy independent Navy and Marine Corps.

"Let me give you the headline of why I'm here today," Mabus said. "Starting this fall, the Naval Postgraduate School will offer … energy graduate degree program[s], the first military educational institution to do so. And beginning early next year, NPS will launch the SECNAV Executive Energy Series – catchy title – a two-week program designed to tackle specific energy challenges."

As Mabus noted, the energy programs will begin in the fall, with an initial offering of energy-focused existing degree programs, to be followed next year by two new degree programs with concentrations in energy technology and policy.

"This energy-focused master's degree program, and the Executive Energy series, will target both the current and future leadership of the Navy and Marine Corps," he continued. "Energy is not just an issue for the future – and not just for the present either – nor just the young officers and policy experts that make up NPS' student population. It is an issue for all the levels, every level of the Navy and Marine Corps, uniform and civilian."

NPS Executive Vice President and Provost Dr. Leonard Ferrari noted the importance of having Mabus not only spearheading defense energy initiatives, but also in looking to NPS to help accomplish his objectives.

“Throughout his career, Secretary Mabus has demonstrated a keen ability to lead in times of change, to take on incredibly challenging tasks in the face of great adversity. He has now been asked to lead in another era of great change. He has stepped to the forefront of our Department of Defense, and committed the U.S. Navy to achieve great things in times when energy dependence is a vulnerability, when environmental stewardship is a priority, and when defense budgets are restricted,” Ferrari said.

"On behalf of President Oliver, I can tell with you great certainty that we are very proud that he has committed to these ideals," Ferrari noted in welcoming the Secretary to campus, "that he has made bold promises to the people of the United States, and, mostly, that he has seen a role for all of us here at the Naval Postgraduate School in achieving these goals."

In his presentation to the NPS community, Mabus noted that the university is a vehicle for change for the Navy as it works to adopt cleaner, safer energies. He noted that the new degree program will help prepare young military officers and civilian leaders to help the Navy and Marine Corps pave the future in energy independence. 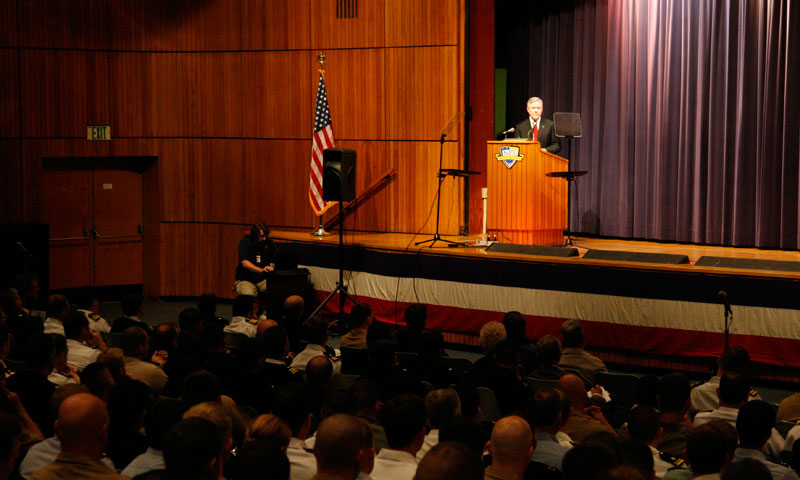 Upon taking over his current role in 2009, Mabus announced five aggressive energy initiatives that would change the way the Navy and Marine Corps get and use energy. Among his goals is to have 50 percent of the fuel consumed in the fleet and ashore come from non-fossil fuel sources by 2020. In order to achieve this and other aggressive goals, he explained that the Navy and Marine Corps would have to set a new standard for both current and future ways of operating.

"Through the master's program and the executive energy series, NPS will ensure that energy is a fully-integrated awareness into strategy, tactics and operations. As a result, NPS students will guide the Navy and the nation toward a better, more secure energy future."

Mabus explained that his ambitious energy initiatives were not just important to reduce the amount of oil acquired from unstable or dangerous countries, but also to protect the men and women in theater. Fuel convoys are frequently targeted on the battlefield, and as Mabus noted, the cost of one marine injured or killed for every 50 fuel convoys is far too high.

President Barack Obama has also joined in the emerging discussion of energy independence, tasking the Departments of the Navy, Agriculture and Energy to work together in advancing the biofuel industry. During the Secretary of the Navy's visit to NPS, he stopped by the school's Biofuels Testing Facility to visit with students and see how the facility is in line to help further the Navy's goals in biofuel research.

"In the two years since I came to the department, we have made a vigorous commitment to change how we get and how we use energy," noted Mabus. "We also now put an energy dimension in everything the Department of the Navy does. The reason is as clear as it is compelling. Energy security is national security. Too much of our oil comes from potentially, or actually, volatile places on earth. We would never allow these countries to build the ships or aircraft that we use. But through our dependence on oil, we give them a vote in whether those ships can sail or those planes fly.

"Seeking alternative fuels and seeking to use fuel more efficiently makes us better warfighters," he continued. "That's our principal mission, and that's the main reason we're doing this. Most importantly, it's going to save the lives of marines, of sailors, of soldiers, and of airmen."

Following meetings on camps between NPS leadership and the secretary to discuss the current and future degree programs, and how the university will help further the Navy's energy initiatives, Vice Provost of Academic Affairs, Dr. Doug Moses, noted the value of educating young military officers and civilian leaders in energy technology and policy.

"NPS is energized - pun intended - to spearhead the SecNav's efforts to extend energy education to the fleet," said Moses. "We're excited about the opportunity to develop and offer both energy master's degree programs for Naval officers and energy executive education to senior Navy leaders."