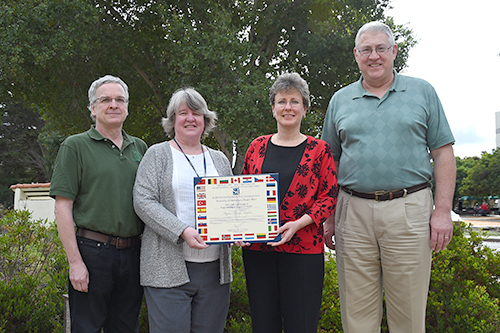 Faculty and researchers from the NPS Department of Operations Research, from left, Dr. Paul Sanchez, Dr. Susan M. Sanchez, Mary McDonald and Stephen Upton, have been presented with the 2014 NATO Science and Technology Organization’s Scientific Achievement Award for their contributions to NATO through data farming.

A team of faculty and researchers from the Naval Postgraduate School’s (NPS) Simulation, Experiments and Efficient Design (SEED) Center for Data Farming has been honored with a 2014 NATO Science and Technology Organization (STO) Scientific Achievement Award for their contributions to the international organization through data farming research.

“[Data Farming] is an extremely effective method in exploring new tactics, new abilities, and creates a way of looking at a huge variety of ‘what if’ questions,” said Dr. Susan Sanchez, a professor in the NPS Department of Operations Research (OR) and co-director of the SEED Center. “By trial and error, you’re just not going to get those good answers, and this is a way to get those answers.”

NPS’ SEED Center frequently hosts International Data Farming Workshops where data farming simulations are investigated by faculty and student teams. The STO Scientific Achievement Award was presented in recognition of one such workshop, MSG-088, an effort to assess the data farming capabilities worldwide in relation to improved decision support to NATO forces.

“Our workshops are intended to bring modelers and analysts up to speed on recent breakthroughs in statistical design of experiments and how those breakthroughs facilitate understanding of complex systems in ways that people thought were impossible as recently as 10 years ago,“ said OR senior lecturer Dr. Paul Sanchez. “We were very excited to get this recognition,” added Susan Sanchez. “In addition to those who won the award, there are lots of NPS faculty and students that participated in the workshops.”

Data farming is uniquely capable of impacting a broad range of topics. Researcher Stephen Upton describes two past efforts that have made a significant impact on the DOD.

“The first example is [then] Maj. Chris Nannini’s work on scheduling UAVs, ‘Analysis of the Assignment Scheduling Capability for Unmanned Aerial Vehicles Simulation Tool’ in 2006,” said Upton. “His work was cited by Mike Bauman, head of the U.S. Army’s TRAC (TRADOC Analysis Center) as perhaps saving the U.S. Army over $6 billion in manpower and acquisition costs.

“The other is Lt. Cmdr. Chad Kaiser in September 2008, whose work on naval tactics, ‘Air Defense Against UAS Kamikaze Saturation Attack,’ was used to develop a Navy TACMEMO (tactical memorandum),” continued Upton.

The NATO STO Scientific Achievement Award was instituted in 1989 to recognize outstanding contributions in the context of activities in aerospace science and technology or aerospace systems applications.