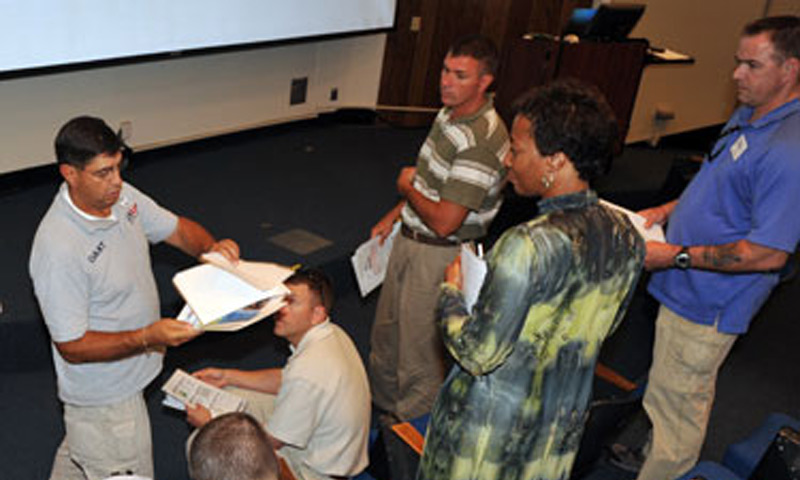 Bill Laspina, a U.S. Agency for International Development (USAID) distributes course materials to military students during a Joint Humanitarian Operations Course at Naval Postgraduate School. NPS’ Center for Stabilization and Reconstruction Studies and USAID came together to present a series of two-day courses that focused on the roles and responsibilities of military and civil organizations during humanitarian assistance and disaster relief operations.

Whether it’s an earthquake in South America or mass flooding in Eurasia, natural disasters can strike at anytime, anyplace around the globe. Typical first responders on the national level are a mixture of military and civil units focused on putting pieces back together for nations and communities in need. The U.S. military and the Office of U.S. Foreign Disaster Assistance (OFDA) routinely respond to these humanitarian assistance/disaster relief (HA/DR) missions and participate in relief efforts side-by-side.

The course served to strengthen and build upon existing relationships as well as to help students understand their roles and responsibilities as they relate to HA/DR efforts by USAID, OFDA and the military.

“The chaos that ensues directly after a disaster is not the time to learn the roles and capabilities of other agencies,” said Arielle Giegerich, a USAID, OFDA advisor and JHOC presenter. “When we’re dealing with time sensitive HA/DR missions it’s an advantage to have these relationships already established.”

Two USAID presenters brought more that 60 students through a series of lectures and case studies during a pair of two-day seminars that outlined the nation’s response hierarchy in HA/DR missions.

“When the United States Government (USG) provides humanitarian assistance or disaster response efforts, OFDA is the lead federal agency,” said Giegerich. “We’re not on multiple missions, we work together to provide a singular USG response.”

“It’s absolutely essential for us (the USG) to provide an effective, efficient and appropriate response,” said Giegerich. “Teaching courses like these to the military helps to ensure this is the type of response we always give.”

Giegerich also spoke of the attributes of working with the U.S. military.

“Each branch of the military has its own unique responsibilities,” she said. “For major or unique needs that we may encounter we call the Department of Defense. If it is a major lift capacity, or moving cargo for point A to point B, we utilize the military.”

Students of the course were able to see the practical applications of techniques and content covered in the course.

“I’ll be mobilizing to Combined Joint Task Force Horn of Africa (CJTF HOA) in the very near future, and working for the future operations directorate,” said Cmdr. John Brown, executive officer of Naval Oceanographic Office of Intel, stationed at Stennis Space Center in Bay St. Louis, Miss. “I expect to be involved in the planning of HA projects and have the very real potential of being a responder to disaster relief efforts in that area of operations.”

Topics studied at JHOC also assisted military students in identifying critical partners in other governmental, international and non-governmental organizations that have a role in HA/DR operations.

“If you know the organizations and role players from the HA/DR communities, you can learn their needs and requirements ahead of time,” said Brown. “It provides a common background, and establishes a good rapport. It’s this good rapport that can really make a difference in the type of response provided.

Brown also noted the relevancy of the programs offered and the quality of learning at NPS.

“I can see why NPS has a center like CSRS,” he said. “The course allowed me the opportunity to work with a diverse group of people from a lot of different backgrounds, and will make me a better officer. NPS plays a great role in the training of military officers.”

NPS’ Center for Stabilization and Reconstruction Studies is a practitioner-oriented teaching program in whose purpose is to provide educational opportunities for the full-spectrum of actors that become involved in peacebuilding, peace and stability operations, and relief and development activities. CSRS accomplishes this purpose through a wide variety of short programs including workshops, games/table top exercises, conferences and applied research initiatives. The Center also enriches the regular graduate degree programs at the university.