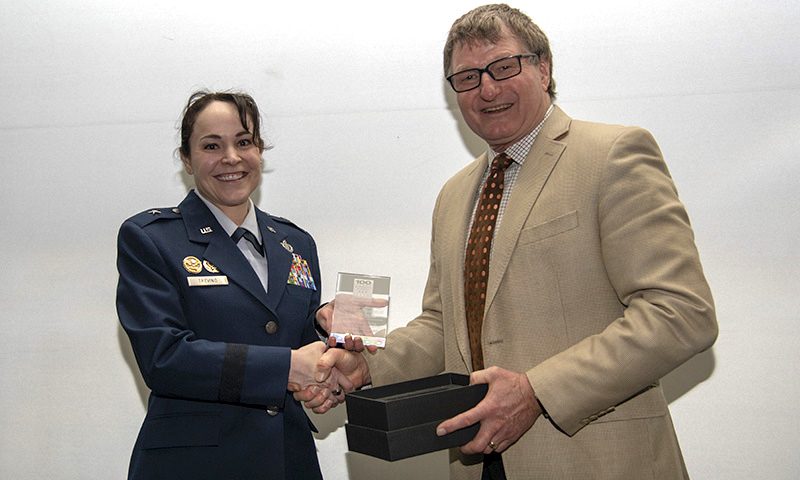 U.S. Air Force Brig. Gen. Alice Trevino received dual honors during a ceremony on the Naval Postgraduate School (NPS) campus, Feb. 7, when the Association to Advance Collegiate Schools of Business (AACSB) inducted her into its 2019 Class of Influential Leaders, in addition to NPS designating her as a distinguished alumna.

“AACSB is honored to recognize Brig. Gen. Alice Trevino and congratulates NPS for its role in preparing alumni who are leading examples of business education as a force for good in the world,” said Thomas R. Robinson, president and CEO of AACSB. “The diversity of backgrounds, industries and career paths of the 2019 Class of Influential Leaders demonstrates that AACSB-accredited schools are preparing graduates to succeed wherever their passions may take them.”

The AACSB’s Influential Leaders program recognizes alumni – and the business schools that prepared them – who personify the role as a visionary figure or agent of change.

Graduating from NPS’ MBA class of 2007, Trevino has served at several key Department of Defense (DOD) contracting positions where she made several significant accomplishments. As senior contracting official in Afghanistan, she infused $3.5 billion into the Afghan economy to increase local industrial growth, and while commanding the Defense Contract Management Agency’s western region, she saved more than $300 million in taxpayer money through a process re-engineering effort.

As the current commander of the U.S. Air Force Installation Contracting Agency, Trevino drives the evolution of acquisition policy and processes. She is a key architect for federal-wide implementation of category management practices to improve end-to-end supply chain management. Her efforts to promote small business led to more than $1 billion of work for small firms across the nation.

“When we put out the call to people who might know some good candidates for the AACSB award, they sent a bio of what Trevino accomplished,” said Dr. William Gates, Dean of NPS’ Graduate School of Business and Public Policy, as he presented her with the AACSB award. “We all agreed that she was the appropriate person to nominate, and I think we were right ... This is a well-deserved.”

“It’s my first time to give an award here at NPS and I cannot think of a finer leader upon whom to bestow it,” said Rondeau. “Trevino is a leader who has been doing great things in the world of accountability for the financial and contract health of the Air Force. We are delighted to be able to say she’s one of us and comes from the NPS family.”

Rondeau and Trevino previously crossed paths, working together at the U.S. Transportation Command, where Rondeau said she recognized Trevino as a future leader.

“You don’t make a mark all of a sudden when you make General,” Rondeau continued. “You make a mark prior to that because promotion is about investment in the future more than it is about rewarding the past.”

Following her acceptance of the two honors, Trevino said that she felt surprised and honored for the distinction.

“I’m very humbled to even be considered for the nomination and to represent NPS, because I had such a wonderful time here,” said Trevino. “Staying in touch with what they teach here, and with the curriculum, is vital to the students and faculty to help them get the recognition they deserve for the business school.”

Trevino thanked her fellow students with whom she graduated, and the instructors who helped her graduate, and nominated her for the award. Without them, she said that she would not have grown into the positions she now fills, nor would she understand the scope of the impactful missions she undertakes today.

“What this honor shows is that the responsibilities NPS students have as managers within the DOD are extremely important and valuable,” said Gates. “The education that students are getting here is contributing to help make them better leaders when they go back to the defense department. I think they can have a greater impact immediately in their careers in the military than if they went to a business school and into the private sector.

“I look forward to great things from our current students when they become alumni,” Gates continued. “I was talking to some students before the ceremony and asked them, ‘So, which of you will be back here 12 years from now getting this award?’

“I’m sure one of them will be,” Gates concluded.

Founded in 1916, AACSB is the world’s largest business education alliance that connects educators, students and businesses to create the next generation of great leaders.