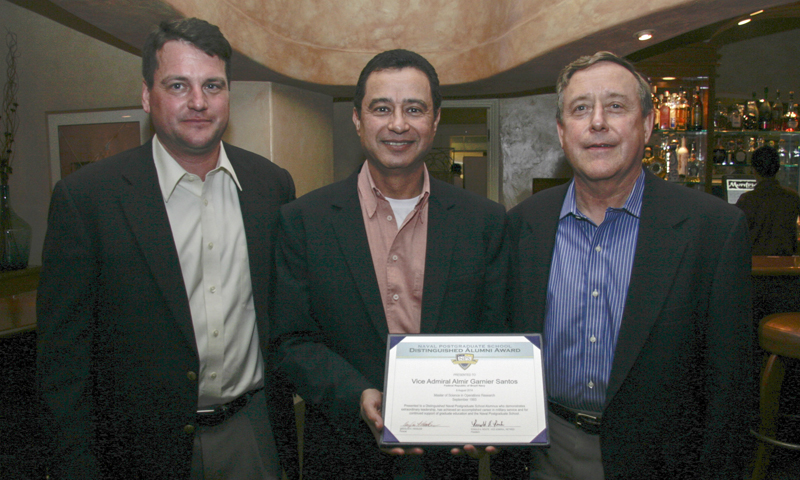 Military Advisor for the Minister of Defense, Vice Admiral Almir Garnier Santos of the Federal Republic of Brazil Navy was presented with the Naval Postgraduate School’s Distinguished Alumni Award during a brief ceremony, August 7. The award recognizes NPS graduates who demonstrate extraordinary leadership, have achieved an accomplished career in military service, and for continued support of graduate education and of NPS.

"I was both surprised and proud to be thought of for this award," said Garnier. "I wasn't expecting it ... When I found out, I was very happy and proud."

“We at operations research are proud to call him one of our distinguished graduates and are pleased that he has been recognized with this award,” echoed NPS Department of Operations Research (OR) Chair Dr. Rob Dell, who served as Garnier’s thesis adviser during his time as a student.

Garnier graduated from the OR curriculum in 1993, authoring his thesis, titled “Using Multiple Searchers to Locate a Randomly Moving Target,” on search optimization and target detection. He spoke highly of his education at the institution, and its role in his career since.

"Training at NPS gave me a way to see operations, to see project management and a way for organizing and solving problems, any kind of problem," Garnier said. "I used a lot of optimization that I learned from NPS to help make new systems for the Brazilian Navy."

“Then Lt. Cmdr. Garnier stood out in his class because of his talent, and because he would often show up late for class,” recalled Dell with a smile. “But his talent convinced me that I wanted to be his adviser despite his occasional tardiness. He was an exceptional thesis student … and Vice Admiral Garnier has always spoken highly of the education he received at NPS and its impact on his career.”

Garnier has since been able to support the missions of the Brazilian Ministry of Defense with assignments as deputy chief of operational intelligence for Brazil’s Naval Operations Command and Director of Brazil’s Center for Naval Analysis.