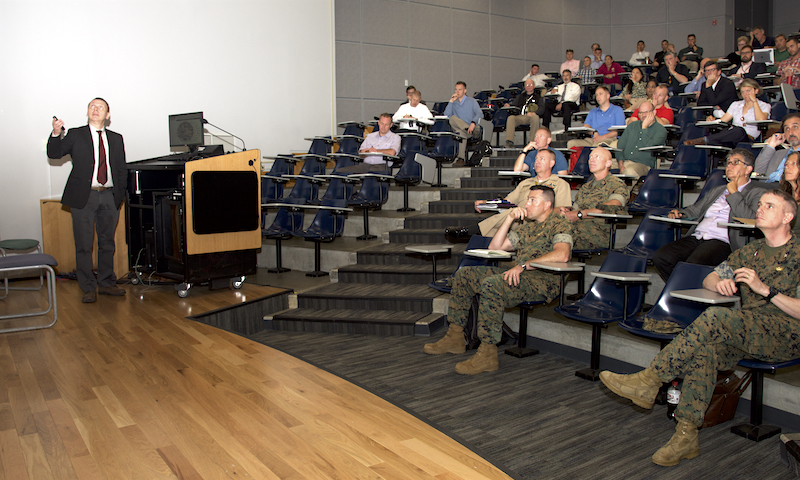 A senior Office of Naval Research (ONR) official recently brought the Naval Postgraduate School (NPS) research community up to speed on its current directions in an ever-changing world.

“If you’ve been paying attention over the last two or three years, you know that new challenges are continuing to occur and change all of our processes, the way we go about our daily business,” Pazik said. “We’re talking about, ‘How do we change our organization to be more agile, to accelerate the pace of technology employment and be transparent in the work that we do?’

The presentation underscored the congruency of interests between the technology and engineering research being conducted at NPS and EWCT, highlighted in the 2018 U.S. Marine Corps Science and Technology Strategic Plan [PDF].

From swarms of autonomous vehicles to cyber warfare to big data analytics, NPS continues in its tradition of providing the U.S. military with relevant and unique advanced education and research.

“As the recipient of the talent that you create here at NPS, I can tell you that you do a great job,” Marine Corps Col. Brian Magnuson, ONR military deputy, told the audience. “The extremely valuable people that you provide us, these folks are hitting it out of the park.

“They’re doing innovation: taking two novel technologies that nobody thought about, putting them together in a different way, and making it an operationally-global capability to fight both tonight and in the future,” he continued.

This sort of creative problem-solving drives the synergy between ONR and NPS, as the Navy adjusts course to adopt emerging technologies that are shaping the future of conflict.

New challenges – global in nature – are pushing the boundaries of military research, and NPS research and education capabilities align closely with those of EWCT. As one of six divisions within ONR, EWCT comprises basic, applied and advanced science and technology research programs – $200 million annually – with advanced technology development in a range of technical disciplines and warfare areas. These areas, Pazik noted, are always in flux to some degree given the often-changing security environment.

“Over the last 15 years, we’ve been paying a lot of attention to irregular warfare, looking at non-state actors and insurgents,” Pazik said, noting that attention will likely not go away.

But, he continued, the National Defense Strategy (NDS) clearly defines our path forward and the need to focus on “our near-peer adversaries and the things they’re working on, technologically and operationally,” he continued. “How are we going to be able to respond quickly and with the right approach to have a positive effect?”

Ultimately, it’s about capitalizing on all of the Navy’s intellectual capital, as Secretary of the Navy Richard V. Spencer noted during his visit to campus in late January.

“We all have an interest in ensuring that NPS endures as the pre-eminent, postgraduate research and education institution and the first choice for the Navy and Marine Corps and our partners,” Spencer noted during a lecture to NPS students and faculty. “But going even further, I want this institution to be the primary education and research enterprise for a partnership with the private sector, government sector and academia coming together at the research level.

“Why do I want this?” he asked. “I want this specifically as the Secretary of the Navy because I have, as the globe has, many vexing problems facing me.”