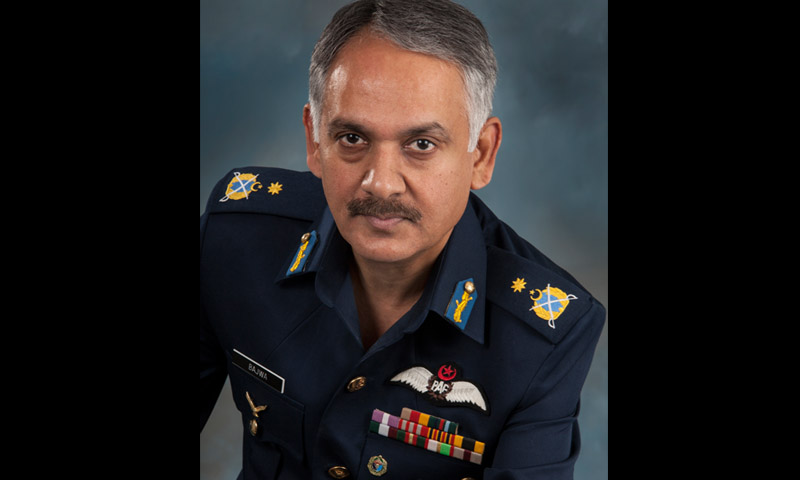 Pakistani Air Force Air Commodore Shahid Latif Bajwa, a member of the upcoming summer graduating class, earned outstanding thesis honors for his detailed analysis of the intricate relationship between the U.S. and Pakistan, and its impact on the region.

Pakistani Air Force Air Commodore Shahid Latif Bajwa will graduate with outstanding thesis honors during the Naval Postgraduate School’s (NPS) upcoming Summer Graduation Ceremony, an honor bestowed upon less than 10 percent of the school’s graduates and the first of its kind to a senior Pakistani officer.

“I’d like to acknowledge the immense contribution made by my thesis adviser, Dr. Carolyn Halladay. I hold her in the highest esteem, as a scholar and as a human being,” said Bajwa.

As a general officer in the Pakistani Air Force, Bajwa offers a unique perspective on U.S. foreign policy in South Asia. Prior to attending NPS, Bajwa spent three years teaching at Pakistan’s National Defense University, and credits his NPS experience with opening his eyes to different viewpoints.

“I received a different perspective [at NPS] … I have learned here that if you say something that is logical and makes sense, then it doesn’t matter who you are or where you are from, people will listen and respect what you have to say,” said Bajwa. “I benefited from the faculty, comprised of accomplished scholars who have published in their respective fields and from fellow students that are coming from the field in Afghanistan … [And] they too benefit from the Pakistani perspective.”

Much of Bajwa’s thesis, “U.S. Security Cooperation with India and Pakistan: A Comparative Study,” details the history of U.S.-Pakistani relations over the last 60 years.

“The U.S. and Pakistani relationship is like a marriage, it has its up and its down but ‘divorce’ is always not the answer. There is no doubt that it is in both of our nations’ interests to pursue cooperation that is in our mutual benefit,” said Bajwa.

Through his studies, Bajwa painstakingly analyzes the regional effects of U.S. aid and military intervention in South Asia with special emphasis given to its effect upon the tenuous relationship between Pakistan and India.

“Much of what India acquires in terms of enhancing its military capability has a direct impact on Pakistan, affecting the security calculus between the two countries. This disparity would be further accentuated if military cooperation between Pakistan and the United States declines,” said Bajwa.

Bajwa describes in great detail the on-again/off-again history of the rocky Pakistani-U.S. diplomatic relationship and offers a Pakistani perspective on several complex security issues, and the Global War on Terror (GWOT).

“Through 2011, Pakistan has lost more than 3,500 security personnel in counter-terrorism operations and as a result of retaliatory terrorist attacks on them. The direct and indirect economic costs were upwards of  $67 billion; the enormous social costs cannot be measured,” said Bajwa. “Despite all these sacrifices, doubts have been repeatedly raised about Pakistan’s sincerity in the GWOT.”

Bajwa expresses concern over the potential for weakening U.S.-Pakistani relations, but also offers recommendations and a road ahead on issues critical to both nations’ interests in the region. Bajwa contends that a successful U.S. strategy in South Asia should involve, amongst other things, “broad-based, long-term relations with two main stakeholders, India and Pakistan, keeping their mutual sensitivities in view.

“The United States should [also] invest more into the projects that directly benefit the masses,” said Bajwa. “USAID and its positive projection in the Pakistani media is a step in the right direction, but it needs further expansion. An internally stable and prosperous Pakistan would suit everyone in the region and beyond.

Upon graduation, Bajwa will return to Pakistan where he looks forwarding to incorporating the lessons he learned at NPS in future leadership positions.

“When I go back to Pakistan and become a senior commander or a staff officer, the knowledge that I gained here will be very useful. I will be able to share a different perspective with my superiors, my subordinates, and fellow policy makers. What I have learned here will be put to good use for the benefit of my service, my country, and its valued ally, the United States,” said Bajwa.