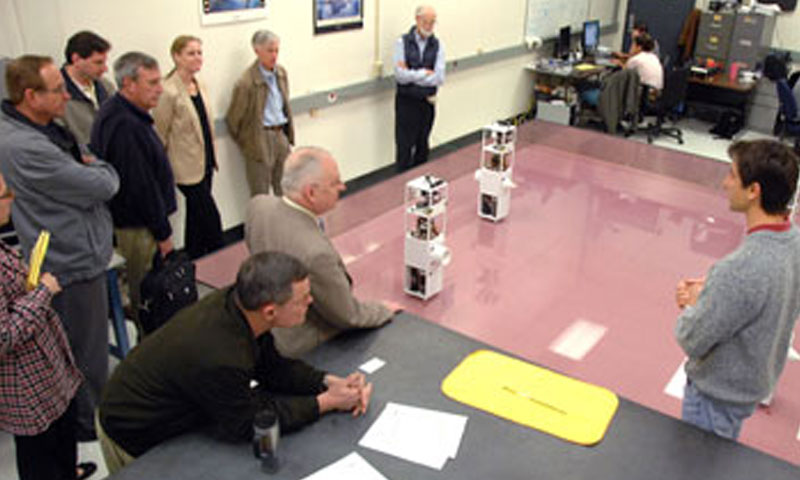 Attendees at the 27th Annual Technology Review and Update watch a demonstration of robots being floated over an airpad to simulate weightlessness in the Spacecraft Robotics Laboratory. The group toured multiple labs around campus to see some of the current projects being studied by NPS students and faculty.

As an institution invested in keeping up with the latest technologies, NPS is home to experienced students, faculty and researchers in fields across the board. This year, the 27th Annual Technology Review and Update gave military, government and civilian personnel from around the country a chance to stay up-to-date on key defense technologies, many of which are being studied currently on campus.  Participants gathered in ME Auditorium for a week of presentations from leading technology researchers, professionals, and NPS faculty on topics including satellites, nanotechnology and unmanned systems.

TRAU started as an annual event in 1983 with NPS Professor Rudy Panholzer putting every effort into creating a way for government professionals to keep abreast of the latest developments in technology.

“Why is it important? Because it will give participants a much better basis for whatever job they are in. They get a much better feel for all of the developments that are going on. Pretty much all areas, as time evolves, get new technologies and they need to at least be aware of that,” said Panholzer. “Decision makers … have to have a good background in the technologies to make sound decisions.”

The conference also allowed NPS faculty to highlight some of their own research and contributions to various technologies. Professors John Arquilla, Don Brutzman, Doug Horner,and Bill Colson presented on topics ranging from lasers to information systems, offering just a few examples of the work taking place on campus.

Aerospace Engineering Professor Jordi Puig-Suari from California Polytechnic University, San Luis Obispo (Cal Poly) spoke about “Strategies for Successful CubeSat Development,” exploring the advancements made in nano-satellite launches. Initially developed by Stanford and Cal Poly to give college students a chance to get hands-on satellite building experience, CubeSats have grown in both standards and opportunities.

“There were a lot of universities that didn’t feel like they could build a satellite. But when it was small, they were like ‘ Oh. Yeah, I can build that,” said Puig-Suari. “And there was no money, no grants, no competitive source of funding, so everybody was in the same boat.”

A cheaper, quicker alternative to traditional satellites, CubeSats were first developed at Cal Poly in 1999 to help facilitate access to space for students within their educational careers, as opposed to the usual 7-8 years. The low cost of development made it easier for universities to maintain a CubeSat program, and see the small, handheld satellites launched within 2-3 years.

Despite the advancements made since 1999, there are still a limited number of launches available annually, meaning that some CubeSats are sent into space without being completely finished so as not to miss the launch opportunity. Many in the industry express a need for more frequent launches, and accommodations on U.S. rockets. With the standard being 10x10x10cm for a 1U CubeSat, the hope is that the small satellites can be carried as payload on technologies already being launched into space regularly.

“If every single rocket launched in the U.S. had CubeSat accommodations, that’s a launch every month or less.” Explained Puig-Suari, “If those spots are there and you have a bunch of universities taking them over, and the NRO wants to launch something that’s for National security, we would be very happy to step aside.”

The hope for the future of CubeSat launches was just one of the many projections for the coming years made at the TRAU conference. Many of the presenters are regulars, returning each year to provide an update on the technologies in their field, and project where the trends are headed. This year’s conference included a look at Internet security with Dr. Roger Schell of Aesec Corporation, integrated circuits with Peter Alfke of Xilinx, Inc., and 3-D Web-based modeling for unmanned systems with NPS Professor Don Brutzman. Presenters spoke about the practical applications for government, military and civilian technologies that not only make life easier, but safer as well. 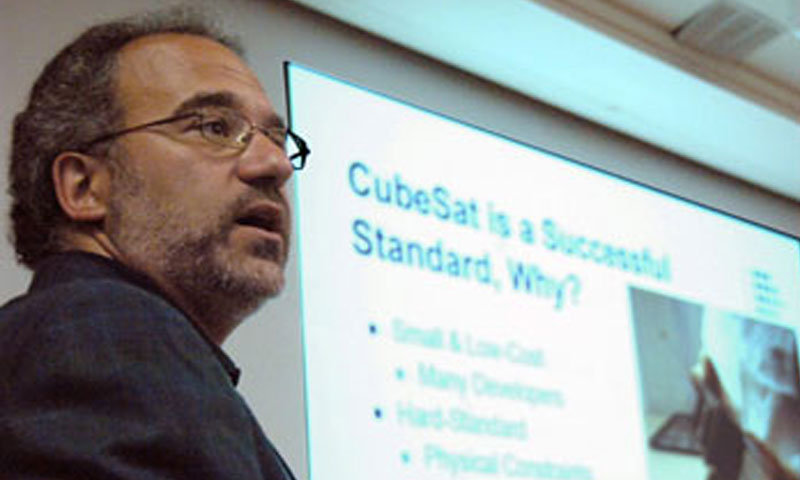 Aerospace Engineering Professor Jordi Puig-Suari from California Polytechnic University, San Luis Obispo, talks about the development of small, affordable satellites known as CubeSats. Puig-Suari was a featured speaker for the 27th Annual Technology Review and Update from April 26-30. The conference brings together key players in defense technology to discuss new developments and projections for the future.

Professor Dennis Polla, Department of Electrical and Computer Engineering, University of Minnesota and Microsystems Technology Office, DARPA, spoke about the recent advancements in MEMS (micro-electrical-mechanical systems), nanotechnology, and their applications.  “One of the very subtle things about MEMS technology is that, as a consumer, we make use of it and we don’t explicitly know that it’s there. But it’s becoming more and more common in many devices,” said Polla. “In fact, what probably isn’t known by the public is that every piece of mail is screened by a MEMS device for anthrax. Mail interrogation machines at postal facilities are an example of a very sophisticated biological test on a full sack of mail … MEMS technology is not going to go away – in terms of problems or technologies – any time soon.”

In addition to hearing about advancements in key technologies, TRAU attendees got a chance to tour the campus to check out labs and projects that make NPS a leading research institutions. CubeSats, space robotics and camera technology were just a few of the stops on the tour, highlighting the work of both students and faculty in labs across campus.

As the years go on for the Tech Review and Update, attendance fluctuates and presenters change, but the goal remains the same: to provide military, government and civilian decision-makers with the most relevant and current information about key technologies. “Educating leaders and decision makers is keeping true to our motto: praestantia per scientiam [excellence through knowledge].”