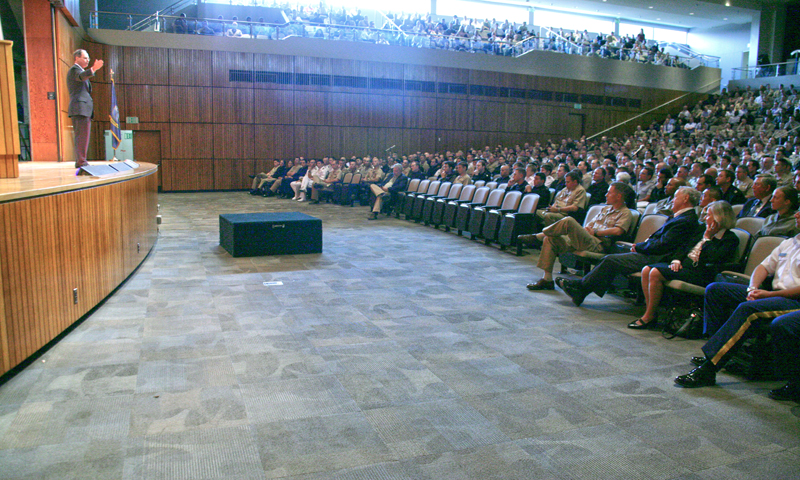 Assistant Secretary of Defense for Homeland Defense and Americas' Security Affairs Paul Stockton speaks to students, faculty and staff during a Secretary of the Navy Guest Lecture (SGL), Sept. 25, in King Auditorium.

A familiar face returned to campus, Sept. 25, as NPS welcomed Assistant Secretary of Defense for Homeland Defense and Americas' Security Affairs Paul Stockton for a campus visit, meetings with faculty and students, and a special Secretary of the Navy Guest Lecture.

“I’ve had a chance to talk with many students and faculty over the last couple of days,” Stockton said. “It’s so impressive how NPS is staying at the cutting edge of emerging security challenges for the United States, both in terms of having the curricula that the nation needs for its future leaders and the kind of research that you absolutely have to conduct in order to know what to teach these students.”

Stockton is plenty familiar with the NPS mission, joining the institution’s faculty in 1990 as an assistant professor in the national security affairs department. Stockton would also serve as director of the Center of Civil-Military Relations, and later, founder and acting dean of the School of International Graduate Studies.

In 2002, he established the Center for Homeland Defense and Security, and served as the center’s director until 2006. He noted that the research and curricula offered at NPS looks to address some of the challenges facing the Department of Defense today.

“The thing that impresses me most after having been away [from NPS] for many years is not the NPS that used to exist, but the NPS that exists today,” he added. “Being on the leading edge of emerging security challenges where the nation most needs us.”

The idea of readiness was also at the heart of his message for the NPS community as he delivered the SGL. He hoped to convey the importance of being prepared for not only the kinds of natural disasters that our country has faced before, but also to be prepared for the unknown.

“We need to start rethinking the severity of the catastrophes for which the nation needs to be prepared,” Stockton said. “We are, I think, much more prepared now for a Hurricane Katrina-scale event, but it could be worse. We could face much greater challenges.

“It’s going to require thinking by the military, and collaborative partnerships above and beyond what we have ever had in the past. There are hazards to the security of the electric power grid, for example,” he continued. “If the grid goes down, due to an earthquake, other natural disaster, or a cyber attack on the United States, we need to do a lot to build resilience for such events before they occur. And then if they occur, when they occur, be in a much better position to save lives.”

Stockton explained that one of his primary goals since being confirmed for his current position in 2009 is to ensure resilience, meaning that even in the event of a natural or manmade catastrophe that disables critical infrastructure, the missions of the department can still be executed.

“The power grid is very resilient today against traditional threats. Industry has done a great job of building a grid that can survive the kinds of challenges we are used to from a historical perspective,” Stockton explained. “But with the rise of cyber threats and other challenges, we need to ensure that industry is doing what it needs to strengthen the resilience of the grid in new ways, so that we in the Department of Defense can execute our core missions.

“At the end of the day, that’s my focus. It’s part of my responsibility for homeland defense to ensure that no matter what, the Department of Defense can execute the missions that the president assigns to it, even if, for example, the electric grid goes down.”

Amid campus meetings and department briefings, Stockton was particularly pleased with the work being done in the university’s defense analysis and homeland security programs.

“[The Naval Postgraduate School] has a national treasure here in the defense analysis curriculum, that supports the special operations and low intensity conflict community,” Stockton said. “It’s absolutely first rate what is being done here, both in research and education.

“Also, especially important to me, is the homeland security curriculum here, sponsored by FEMA and the Department of Homeland Security,” he added. “It has students from across the nation as well as many state and local students from fire, police and other professions that are going to be on the cutting edge of saving lives. That program is thriving. It’s an example of how the faculty here make it possible to meet emerging security challenges. That’s what makes NPS a national treasure.”