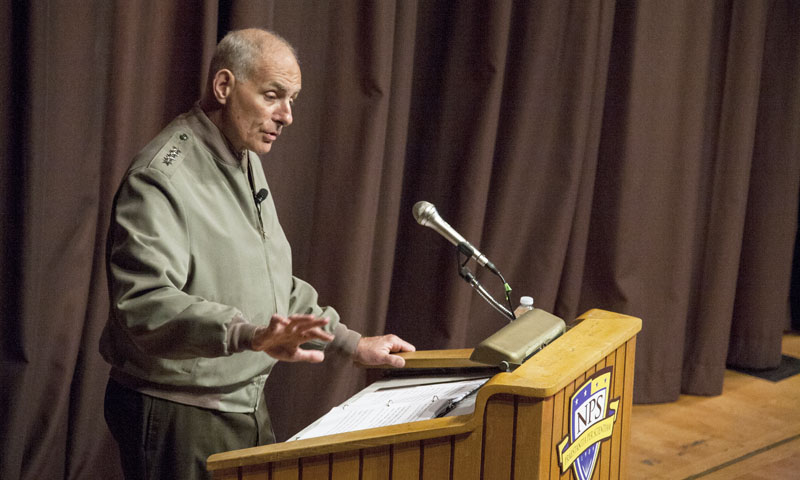 Commander of the United States Southern Command (Southcom), Marine Corps Gen. John F. Kelly, details his command’s mission priorities and initiatives within its Area of Responsibility during a presentation to NPS students in the university’s King Auditorium, Feb. 19.

Kelly is no stranger to the Navy’s graduate university, as Southcom has partnered with NPS on several high-visibility initiatives including efforts to launch nano-satellites, deploy undersea sensors and employ NPS developed, advanced intelligence methodologies to disrupt transnational criminal organizations.

“Schools like NPS are invaluable to our ability [to conduct operations in Latin America],” said Kelly. “The fact that we can ask NPS to look at something specific, be it drugs, economics or other areas of interest that are beyond the scope of my staff’s expertise, is very important.”

Kelly spoke at length about the Southcom area of operations - an enormous geographic region encompassing Central America (south of Mexico), South America and the Caribbean.

“Latin America is an amazing place, there are a few countries that didn’t get the ‘peace and democracy memo,’ but most of them got it and they understand that open borders and open economies are better for their people,” said Kelly.

Kelly’s comments on everything from narco-terrorism to transnational crime and economics were described by attendees as “surprisingly candid” and offered insights into his role as one of the U.S.’ nine combatant command leaders, and on his decades-long career as both an officer and enlisted Marine.

“I was never so happy as when I was an enlisted squad leader leading Marines … It’s all been down hill from there,” quipped Kelly.

Kelly also spoke about the damage done to Latin American countries by the corrupting influence of the drug trade – a trade that, according to Kelly, exists to feed the U.S.’ seemingly endless appetite for illicit narcotics.

“We have destroyed governmental institutions through the corruption caused by our drug consumption,” said Kelly.

Referring to the cartels that monopolize the Latin American drug trade, Kelly noted that, “These transnational criminal organizations have no conscience, no limits and no morals … It’s not just drugs, it’s is lumber, gold mining, human trafficking and virtual slavery.

“The cartels are diversified and are composed of sophisticated international businessmen,” he continued. “Their distribution networks are so efficient that they would embarrass FedEx. Their networks cost $1 billion to operate but earn $84 billion in annual profits.”

Clearly, counter narcotics operations and transnational organized crime are significant priorities for Kelly’s command, who noted their operations and partnerships removed hundreds of tons of cocaine and other illegal drugs “from the source.”

Still, Kelly points out that the news is not all bad, and that nations like Colombia, Brazil and Peru have made notable strides in drug eradication and good governance.

“I cannot say enough about what our closest allies in the region are doing.  The Colombians have a done an incredible job not only fighting the FARC, but reorganizing their society and their economy to improve the lives of their citizens,” said Kelly.

Kelly also noted the significant human rights advances made by the Colombians and other partner nations in the region and the role of the U.S. military as an advocate for those rights.

“Everything we do in Southcom begins and ends with human rights,” said Kelly. “A lot of people talk about human rights, but our military lives them.”

Southcom headquarters is located in Doral, Fla. and is one of nine unified joint Combatant Commands (COCOMs) in the Department of Defense. Southcom headquarters employs more than 1,200 active duty and civilian personnel representing every branch of the U.S. military and several federal agencies.