Southcom Turns to NPS to Evaluate CubeSats for Communications Support

Southcom Turns to NPS to Evaluate CubeSats for Communications Support 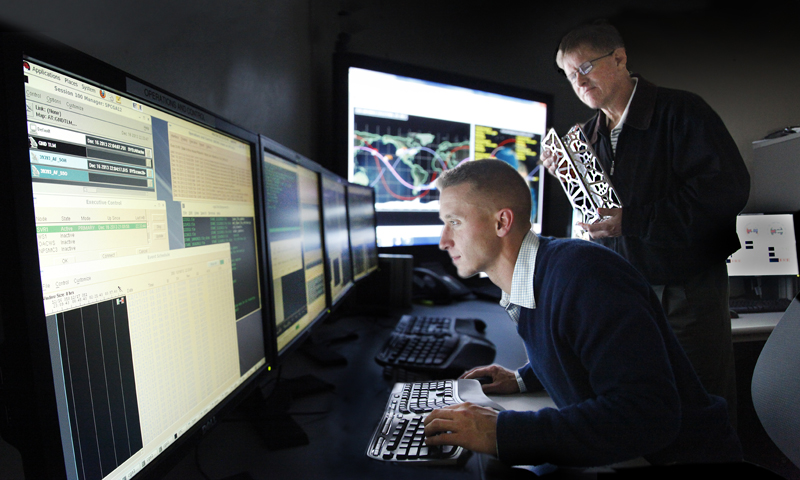 The U.S. Southern Command (Southcom) has embarked on an ambitious international CubeSat program, and turned to the Naval Postgraduate School for help.

The NPS Distributed Information Systems and Experimentation (DISE) research group along with the university’s Space Systems Academic Group (SSAG) teamed up to help the combatant command evaluate how low-cost space communications capabilities can support information sharing and tactical communication across the remote and densely-forested areas common to the Southcom area of operations.

A specially-modified CubeSat, dubbed the Space and Missile Defense Command Nano-Satellite-3 (SNAP-3), was launched from Vandenberg Air Force Base aboard an Atlas 5 rocket, and housed inside the NPS SSAG-developed CubeSat launcher, NPSCuL.

DISE Research Associate Brian Wood has lead on the NPS effort to assess the operational value of the technologies employed by the mini-satellite.

“SNAP-3 is an attempt to fill a capabilities gap associated with the need for other than line-of-sight communications in Southcom’s heavily-forested area of operations,” said Wood. “NPS will be conducting an assessment of SNAP-3’s ability to fill that gap.”

SNAP-3 seeks to overcome line-of-sight limitations in two ways. First, it allows Soldiers on the ground to ping CubeSats in low earth orbit which in turn relay messages to command and control nodes or to other service members.

But SNAP-3 also utilizes Unattended Ground Sensor Exfiltration technology. Researchers hope to use unattended ground sensors to gather intelligence, such as the presence of insurgent or criminal groups traveling along known smuggling routes, and then beam that data to orbiting SNAP-3 satellites. The satellites would then download the data to receivers without the need to place Soldiers in harm’s way.

“Over the next 18 months, we will be traveling to Brazil and Peru, and possibly other interested nations, where we will set up a scenario that tests the ability of SNAP-3 to perform as designed,” said Wood.

“I will be conducting an analysis of the architecture of the constellation of the SNAP-3 network,” continued Jarolimek. “I hope to be able to make recommendations to the U.S. Army’s Space and Missile Defense Command and look at the manner in which the Marine Corps may be able to benefit from this technology as it is realized.”

Vidur Kaushish and Wenshel Lan, doctoral students in the university’s space systems program, are plenty familiar with the NPSCuL launcher, and helped get SNAP-3 into the payload for the Southcom launch.

“We built, tested and integrated the system before delivering it to Vandenberg,” said Kaushish.

“I used to work on launch vehicles before I came to NPS, but I rarely had the opportunity to get up on the rocket and work with the hardware like we do here,” said Lan. “It’s something that not many people get to do.”

Newman has been educating NPS students, and develop satellite technology, since his time as an astronaut in NASA’s space shuttle program.

“I realized that CubeSats are an ideal satellite-studies platform due to their cost, the variety of missions they are suited to perform and their ability to be used in conjunction with other CubeSats,” said Newman.

That realization has led to numerous CubeSat launches and the incorporation of CubeSat technology into the SSAG curriculum, which has allowed NPS students and faculty to demonstrate the full spectrum of satellite operations.

“You get a rounded experience [at NPS] when it comes to how a satellite is developed from start to launch, its something that you would not see at other graduate institutions,” added Kaushish.

Newman insists that satellite research at NPS has both academic and practical value.

“There is a need in the fleet to understand what the capabilities of our space systems are. We are educating students to understand and to be able to speak to satellite capabilities … Students have a variety of thesis topics available to them, by studying in this area they know how to apply what they have learned,” continued Newman.

SSAG’s hands-on application of theory is evident in the two CubeSats it has launched this year.  These satellites are helping students and researchers to understand the complexities of low-earth orbit and providing platforms that can be used to test new technologies.

In addition to SNAP-3, NPS also recently launched its Solar Cell Array Tester (NPS-SCAT) satellite. Indicative of the SSAG approach to both satellite education and development, SSAG students and faculty worked together to build and launch the NPS-SCAT satellite in order to test solar arrays in the low-earth-orbit environment.

“NPS-SCAT has room for four different types of solar cells, ranging from cheap to expensive high-efficiency cells. The experiment will allow us to see how the various cells perform and degrade in a low earth orbit,” said Aaron Felt, an NPS intern from nearby California State University Monterey Bay (CSUMB).

“There is currently a lot of interest in our command and control center from various groups and academic institutions; NPS currently has the only functioning CubeSat network,” said Felt.

NPS has partnered with the University of Hawaii, Utah State University, and the Air Force Institute of Technology to develop the MC3 Center. Partnered universities donate sites for dishes and antennas and in turn, they are able to use NPS–provided ground stations for their own satellite programs.

“Our network of sites allows us to have more frequent and longer satellite contacts,” said Felt. “This is important because if you are working with data-intensive payloads, a network gives you more room to download your data.”

Other members of SSAG’s eclectic student body are working on myriad technologies associated with neither SNAP-3 nor NPS-SCAT.

Lt. Jordan Goff of Pittsburgh, Pa. is working with Newman and Professor Hersch Loomis on the development of a payload processor that will be able to work in the presence of harmful radiation. He hopes that the work that he is doing now will be applied to future CubeSat technology.

“The processor that I am working to create will interface with CubeSats and will hopefully be able to do everything from process images to open doors,” said Goff.

Natasha Nogueira came to NPS as a high school summer-intern. She is working with Newman on a high altitude balloon program to test the conditions of near space.

“A lot of what we do with our balloon is testing capabilities and technologies that will later go into CubeSats,” said Nogueira. “Balloons are an inexpensive way to get the equipment we are testing into the low-earth-orbit-environment.”

With a broad range of expertise across campus to tap into, NPS’ diverse satellite program continues to support student efforts to harness emerging technologies and continue to push the envelope of space education and exploration.