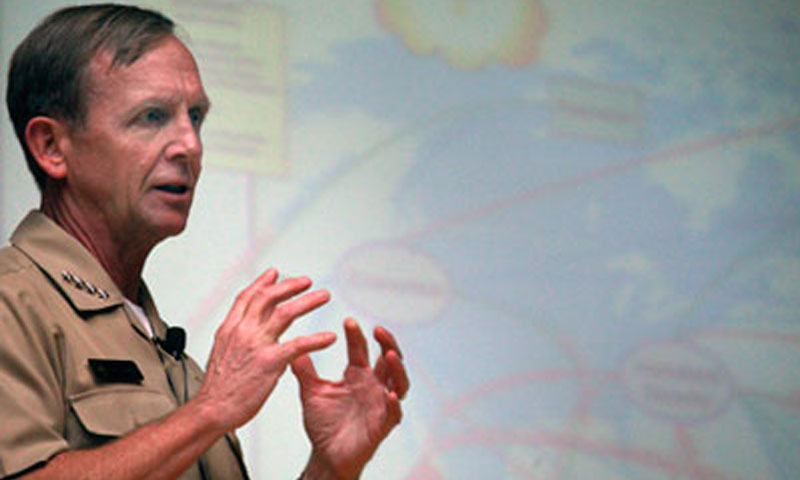 Commander of the U.S. Special Operations Command, Adm. Eric T. Olson, addresses the NPS student population during his campus visit to meet with special ops officers in the Defense Analysis curriculum. Olson is the first Navy SEAL ever to be selected as a four star Admiral, and is a 1986 graduate of NPS.

Since the Special Operations curriculum of the Naval Postgraduate School’s Defense Analysis Department is sponsored by the U.S. Special Operations Command, a visit and special lecture by USSOCOM Commander Adm. Eric T. Olson provided a morale boost for the program’s students, faculty and staff.

Olson, an NPS distinguished alumnus, visited the campus to engage Defense Analysis students one-on-one and in small groups, and ultimately to address the students, faculty and staff of NPS during a presentation on USSOCOM’s history, operational capabilities and intentions for future development.

The Special Operations curriculum mirrors tasks that USSOCOM performs during regular duty. This gives officers working at NPS an opportunity to gain a higher level of understanding when dealing with situations, planning operations, or in the field.

“Adm. Olson has invested enormous resources and time to ensure the continued success of the curriculum and ensures his finest officers are selected to attend,” said Air Force Lt. Col. Kurt W. Buller, who has spent the majority of his career in the Air Force Special Operations Command.

Olson took the time to meet with small student groups from the DA programs. He met with students from USSOCOM to discuss their theses and also to gather feedback on how his command is meeting their needs here.

“He cares deeply for his Special Operators and their families,” Buller said.

Core activities of the Special Operations Forces include such tasks as counterterrorism efforts, civil affairs operations, and counter-proliferation of weapons of mass destruction. The Defense Analysis Department offers through their centers and degree programs instruction on irregular warfare, terrorism and counterterrorism, sub-state conflict, the advantages of information technology, and information superiority.

This “microcosm of the Department of Defense,” as Olson referred to USSOCOM, “has a broad spectrum of capabilities – running our own schoolhouses, managing our own budget, and procuring our own equipment to develop and sustain the force that’s assigned.”

“Adm. Olson’s intent through his presentation was to update the audience on what his headquarters is doing to execute its role as both a Special Operations Force provider and as the supported commander for synchronizing the global campaign against violent extremist networks,” Buller explained.