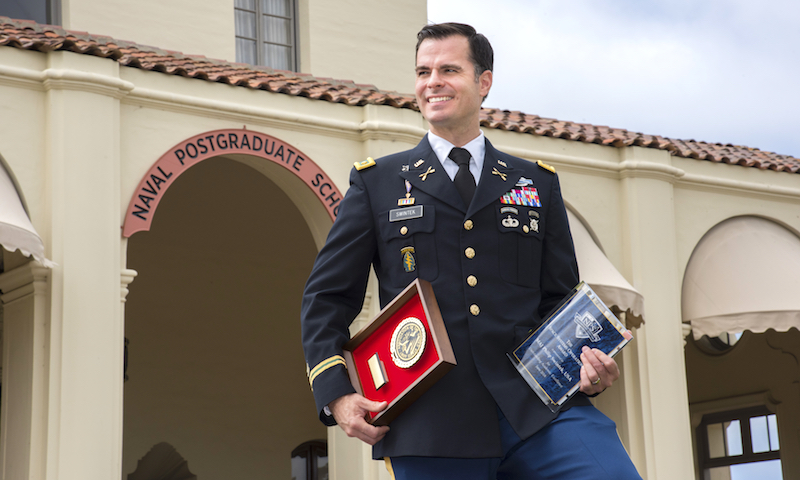 A Spring Quarter Naval Postgraduate School (NPS) graduate received two of the school’s prestigious student awards for the master’s thesis he wrote on his way to dual master’s degrees.

U.S. Army Maj. Philip Swintek was presented with both the Association of the U.S. Army, Gen. Joseph W. Stilwell Chapter, Award for Outstanding Army Student and the Space Systems Operations Award for top space systems student. The awards reflect the honoree’s outstanding performance at NPS, as demonstrated by academic achievement, thesis research, motivation and community involvement, according to the citations.

“I worked really hard while I was here,” Swintek said. “It’s always nice to have your work recognized, to know that the long hours at the kitchen table were worth it, and hopefully had an impact.

“More important than the award, I just hope that the things I studied, and specifically my thesis, could potentially be impactful to folks like me across the world someday,” he added.

Swintek’s thesis, entitled “Critical Vulnerabilities in the Space Domain,” explores the potential of using nanosatellites as an alternative means of satellite communications. The U.S. military has become increasingly reliant on traditional satellites for a range of activities, from navigation to communication. This reliance, however, presents a susceptibility to adversarial actions.

“Nanosatellites are a low cost and expedient near-term solution for this vulnerability,” Swintek wrote. “A constellation of nanosatellites in low earth orbit […] will provide an alternative method for satellite communications.”

“I think better understanding the systems I rely very heavily upon will make me a better commander,” Swintek said. “Most of us don’t know them because it’s a tricky subject and I think more people in our field probably should understand this technology that we use to do virtually everything that we do.”

Swintek came to NPS to complete his studies in the university’s challenging defense analysis program, sponsored by the U.S. Army Special Operations Command. But while he was on campus, he decided to make the most of his time, and pursued getting a second degree.

“I just decided I wanted to try and get a second master’s degree in science while I was here, and space systems seemed to be the most feasible and the most applicable to what I do normally in the Army,” Swintek said. “It just felt like a natural fit.”

With graduation now behind him, Swintek reports to the Army’s special operations command in Fort Carson, Colorado, to put his education to use.