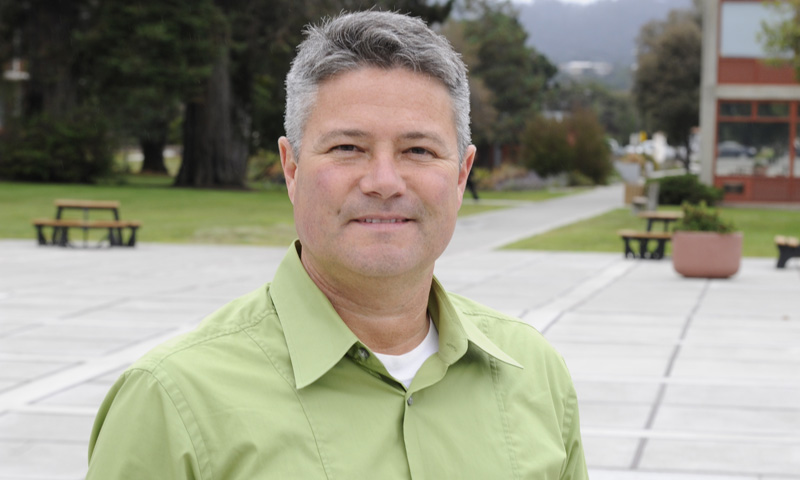 It may not be immediately obvious how a focus in environmental resource policy could lead one to ask the tough questions about the privatization of global security, but for Naval Postgraduate School (NPS) national security affairs (NSA) doctoral student Cmdr. Dan Straub, the privatization of any number of things – from water to security – brings with it potentially critical implications.

“The privatization issue is really important to me,” explained Straub. “I started out looking at water scarcity. And what I saw was that real conflicts were occurring around the privatization of scarce resources.”

After consulting with professors in the NSA department, Straub began to see a bigger picture emerging of privatization issues, and how wartime security has been privatized with the use of defense contractors. In his dissertation, Straub explores the idea of using global security companies in peacekeeping efforts, and what kinds of complications arise when doing so.

“This dissertation deals with an extremely important topic, which is the possible outsourcing of United Nations peacekeeping. As Cmdr. Straub demonstrates, private security contractors, or PSCs, have been used for all imaginable security roles and missions, but for one: peacekeeping under United Nations auspices,” explained NPS’ Center for Civil Military Relations Program Manager and Distinguished Professor Thomas Bruneau, Straub’s thesis advisor. “He analyzes the positive and negative dimensions of this possible outsourcing, and provides a tremendous amount of new data. The dissertation is based on both a thorough analysis of all available documents as well as extensive interviews with informed experts and practitioners.”

“In many cases, these private security companies claim that they could have done things like stop the genocide in Rwanda or prevent ethnic cleansing from occurring, because they are cheaper, faster and better,” Straub explained. “But those claims have never absolutely been tested.”

“On one side, you’ve got the privatization folks who say, ‘We are absolutely cheaper, faster and better.’ And on the other side, you have people saying, ‘Well, that may be true, but you have no legitimacy. You commit crimes and aren’t held accountable for them, and people don’t trust you,’” said Straub. “So how are you going to build communities and protect human security if you don’t have those fundamental elements? I really look at whether human security is more effective by using private security companies or not using them. Because in the end, isn’t it really about protecting people?”

Straub points to accusations that private security guards with former defense contracting company Blackwater Worldwide killed 17 civilians in Baghdad in 2007. Since they were accused, a number of charges have been brought against the company and the accused shooters in civilian courts, but several pieces of the case have fallen apart due to difficulties with jurisdictional obstacles and the challenge of presenting sufficient evidence from a warzone.

Straub notes that security contractors are not held as strictly accountable for their actions as military personnel are. The process of prosecuting war crimes by civilians is significantly more difficult once the case returns to the company’s hiring country.

“The Uniform Code of Military Justice in the United States covers U.S. Soldiers, Sailors, Airmen and Marines. But a contractor, the first thing that happens is the company fires the employee, and the individual gets sent back to the United States,” he explained. “And it’s very difficult to prosecute a crime that takes place somewhere like Iraq or the Democratic Republic of Congo back in the United States without the evidence, and without really a proper investigation by the authorities who are supposed to be doing the convicting.”

While privatized security companies may differ from military in the way that punishments are handled, Straub says they are no different in their roles as representatives of the country by which they are sent. Distrust among locals for the security companies could translate to a disruption in relations between countries, particularly when criminal activity is at the root of the distrust.

“Companies like Blackwater have created major problems, not only for the company itself, but for the United States, the hiring state,” Straub noted. “That’s not to say that peacekeepers themselves, UN peacekeepers, don’t commit crimes and human rights abuses either. The difference is that UN peacekeepers are accountable to a specific nation, not a company. When a peacekeeper gets sent back to his or her nation, that person is dealt with by [his or her] own country. And there is legitimacy to that process.”

What Straub concluded from his research is that the proper mechanisms are not yet in place for private security companies to be routinely used in peacekeeping operations. He noted that such companies are indeed being used by the United Nations for security purposes, but that the policies and guidelines in place for contractors are not yet sound enough to avoid the legal, political and logistical challenges, should problems arise.

He added that, although private security contractors are not yet being used for peacekeeping, they are indeed being used as security alongside peacekeeping operations. He stressed that both sides are still trying to figure out the extent to which privatization can be successful, but that it’s not something that will simply go away. The policies need to be explored and established if contractors and armed forces are to safely and effectively execute peacekeeping operations.

“Where does the service member’s job end, and where does the contractor’s job begin?” Straub asked. “It’s a continuum, and finding a place on that continuum is right now a moving target.”