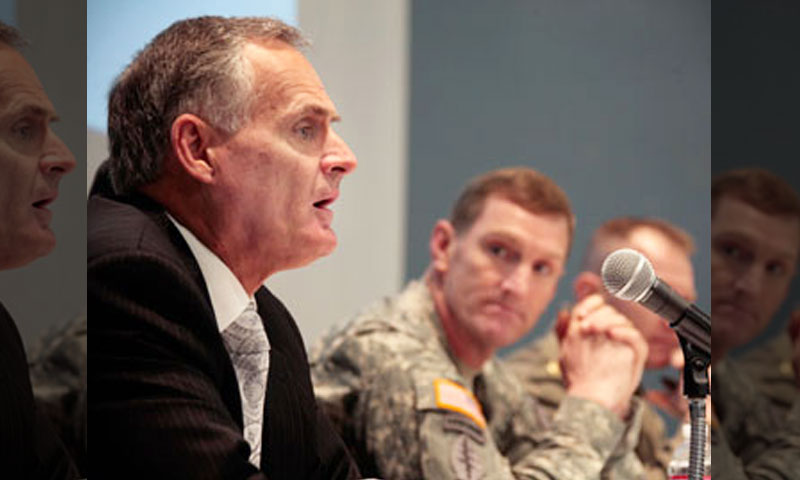 Richard A. Genaille, a Senior Executive Service member and Director of Policy for the Office of the Deputy Under Secretary of the Air Force for International Affairs, served as a panelist for the warrior panel at the 4th Annual Foreign Area Officer Conference. A student-run event hosted by the FAO Association of Monterey, the conference brought together FAOs from across the services to address any questions or concerns that current and future FAOs have about the roles required of them.

NPS was filled with Foreign Area Officers (FAO) from across the Armed Forces for the Fourth Annual Foreign Area Officer Conference hosted by the FAO Association of Monterey (FAOAM). Acknowledging the many jobs of the FAO, the conference followed the theme of “Today’s FAO: Warrior, Scholar, Diplomat” and brought together senior FAOs, experts on national security and foreign affairs, as well as FAOs in training for an in-depth two-day session. Separated into panels, there were discussions centered around each of the roles of the FAO, with the leading question, “Bridging the gap as a warrior, scholar and diplomat: How can Foreign Area Officers (FAO) reconcile their many roles?”

The role of the FAO is a unique one, as they are first trained as soldiers for combat. They are then put through extensive classroom training for one of the Combatant Command (COCOM) regions. NPS and the Defense Language Institute frequently work together to provide FAOs with the language and understanding of political, cultural and social details of the region they will be specializing in. The FAOs are then given a chance to study in their region, to better understand the people firsthand. “There’s no substitute for being there,” said panelist Navy Captain Hong C. ‘Jim’ Kim, “Seeing it, smelling it, feeling it. There’s no substitute for that. Meeting people, understanding, handshakes, having tea together … that’s what FAO is about.”

During the conference, each of the subject panels featured experienced representatives from various services and branches of government. Marine Corps Col. Philippe Rogers, a member of the Diplomat Panel, shared his experiences as a FAO and what soldiers can expect when they are called to duty.

“Let me just say, you define your own roles and your own limits. There’s a lot of work to be done. You are the modern day Livingstons; Sir Edmund Hillarys. You are the adventurers out there that we are paying to be those experts.” Rogers continued, “Kudos again for taking this step. For getting out of your comfort zone and doing something that is different. You are going to get your moment in the sun. They are going to call you on the spot and say, ‘FAO, it’s your turn’. It doesn’t matter what rank you are or what uniform you’ve got. They just want to hear what you know. Are you gonna hit a home run when you get that chance? That is the moment you prepare yourselves for.”

The panels explored the many roles of the FAO, with questions from the audience addressing everything from responsibilities in the field to the quality of training received before deployment. 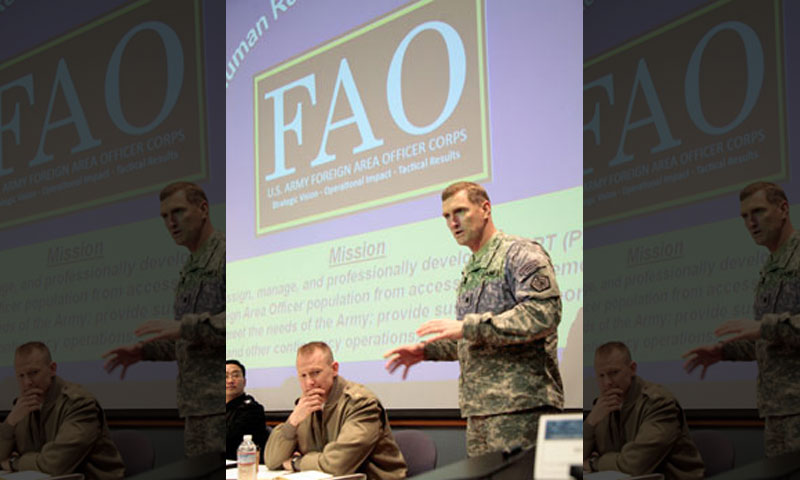 Lt. Col. David Brigham explains the role of the Army Foreign Area Officer during the 4th Annual FAO Conference, a student-run event held at NPS. Lt. Col. Brigham served on the warrior panel, answering questions and concerns by current and future FAOS about their many roles in the service. FAOs gathered from around the world to share their insight and expertise on what it takes to “bridge the gap” between their roles as a warrior, scholar and diplomat both here and abroad.

“It’s a student-run event and the whole point of this thing is [that] the conference continues to answer the questions and address the concerns that students and FAOs in training have,” said FAO Assistant Conference Chairman and NPS student Lt. Cmdr. Luke Gunnels. “It doesn’t matter how big it is or how many superstars you have on the panel. It’s just about whether it serves a purpose for our students,” he continued.

In a first for the FAO conference, a “Spouse Forum” was included in the lineup for husbands and wives of FAOs to discuss the joys and perils of living abroad. A panel of experienced military wives shared tips and tools for packing, moving and raising children overseas. Panelists included Casey Lucius, Margaret Duke, Kristin Vestal and Maureen Lyon. The informal panel discussion allowed FAO spouses preparing to move overseas a chance to ask questions about everything from health care, immunizations and orthodontia abroad to what to pack to prepare for living away from the creature comforts of home.

One FAO attended the spouse forum to ask about how to get his wife’s dog shipped overseas.”She won’t come with me if she can’t bring her dog” he explained. A FAO wife asked about how to prepare to have a baby in a foreign country. For the men and women standing in support of their FAO spouses, the unknown can be terrifying. Naval War College Professor Casey Lucius, a FAO wife herself, understands the uncertainty and helped address it as a panelist for the spouse forum.

“I think it’s such a unique tour,” she said. “It’s not the traditional PCS because you are PCS-ing overseas which has a number of unique challenges.” She added, ”You are usually not living in military housing or on a base, so you may not have the same support network that you are used to here in the United States. It is a unique set of orders for the family, for the spouse, so it’s important to prepare people for both the opportunities and the challenges that they are going to be facing.”

The conference served as the largest gathering of FAOs in the world, allowing for discussion across the services about the future of the FAO program as the demand continues to grow. The Army leads with the number of trained FAOs, while the Navy has hopes of doubling their numbers by 2015. There are currently over 200 FAOs from across the services in training on the Monterey Peninsula.

“I think in this conference – and … increasingly [as] we continue to have these conferences – you’re seeing the networking happen between the services. And while we are growing maritime FAOs in the Navy, in the Marine Corps and in the Coast Guard, you’re going to have Army FAOs and Air Force FAOs downrange where there will be no Navy FAOs,” explained Navy Rear Admiral Jeffrey L. Lemmons. “And they’re going to need to understand and explain the global maritime partnership plans and be able to explain what we are trying to achieve as a maritime service by having the network, the linkage and the understanding … And the friends that they are developing.”