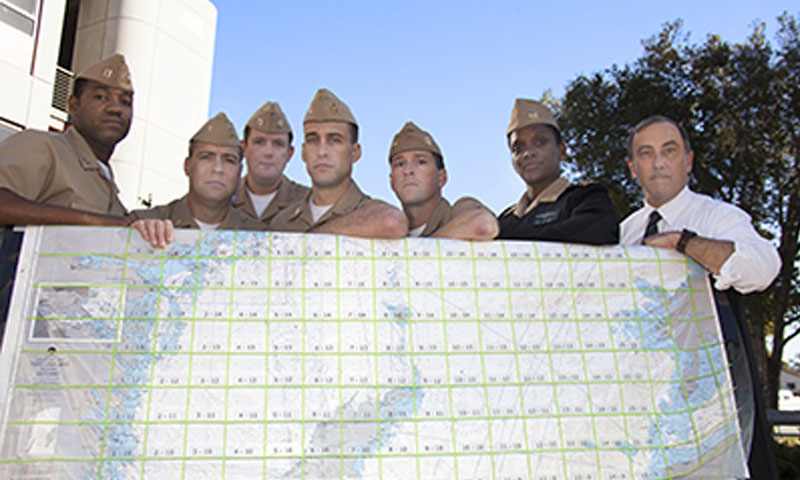 Retired Army Col. Jeff Appleget, far right, and several of his students hold a detailed map of Gotland Island off the Swedish coast. The island was the focal point of a detailed wargame and campaign analysis exercise examining operations tactics of the new Littoral Combat Ship.

Students at the Naval Postgraduate School (NPS) have spent several months on a series of exercises designed to test the combat and logistical capabilities of the Navy’s newest class of vessels, the Littoral Combat Ship (LCS).

Appleget teaches his students the art of building and fighting complex wargames designed to test tactics, strategy and emerging technologies. NPS’ recently established Littoral Operations Center (LOC) drew upon Appleget’s and his students’ operational experiences to understand how to best utilize the LCS.

“These games are starting to reveal what the future Navy is going to look like,” said Appleget.

The U.S and Swedish sponsored wargames and campaign analyses are exploring a notional conflict in the Baltic Sea – a 2025 Russian invasion of Sweden’s Gotland Island. Researchers are exploring the ability of LCS vessels to defend the island and to interdict attempts to land a hostile amphibious force. The exercises are also providing a forum for students to explore littoral strategies and to make equipment and weaponry package recommendations for littoral vessels.

“Sweden is a great partner because they have experience in defending against a larger power [the former Soviet Union] from the littoral zone. Teaming with the Swedish armed forces makes a whole lot of sense as we examine the ability of smaller nations and the U.S. to defend against larger regional actors while operating in the littorals,” said NPS Professor of Practice, retired Navy Capt. Wayne Hughes.

“We think the Baltic scenario that we’ve cooked up is relevant. If we substitute China for Russia, and Japan for Sweden and one of the disputed islands in the China Sea for Gotland, we have an opportunity to look at something with possible real-world implications,” said Hughes.

NPS researchers insist that the combination of student experiences, allied expertise and scholarly research makes the recent exercises exceedingly valuable to future naval operations. According to Hughes, they illustrate the ability of NPS’ academic centers to conduct research while providing students with relevant military education.

“NPS’ Littoral Operations Center is the perfect example of what we do well and nobody else can do … Our center has a research arm, and a teaching arm,” said Hughes. “There is nothing like NPS research, our blend of military students and both civilian and military faculty give us a decisive edge.”

Kline’s campaign analyses exercise drew upon lessons learned in Appleget’s wargame. He too believes that his students’ involvement in research is a critical component of U.S. naval success around the world.

“The students that we work with are doing directly applied research and are making direct contributions in a manner that cannot be done anywhere else,” said Kline. “Our counterparts lack the operational experience. If you don’t have the expertise that our students bring, you end up with a guy in a white coat asking abstract questions that do not directly impact current operations.”

“The research that occurs here allows me, as a student, to stay current,” added U.S. Navy Lt. Cmdr. Phil Mogilevski of New York, N.Y. “I may be sculpting the very systems and practices that I will utilize in the future.”

In addition to LCS tactics and strategy, students addressed resupply, fueling and other logistical concerns with the new vessel.

“We put a lot of effort into understanding how we support these new systems. [Exercises] cause us to ask questions, and understanding tactical operations allow us to understand how the resupply will be accomplished,” said U.S. Navy Lt. Cmdr. April Malveo of New Orleans, La.

The current round of LCS exercises reflects the increasingly joint nature of U.S. military operations. Army logisticians conducted both wargames and campaign analyses with U.S. and international naval strategists.

“I think that the Army can learn a lot from understanding the Navy’s problem solving process,” said U.S. Army Maj. Pete Nesbit of Cincinnati, Ohio. “I also like to think that I am offering some methods and lessons-learned that will be useful to the Navy.”

The completed formal campaign analyses are scheduled to lead to an international workshop, and eventually, researchers hope to test their theories in joint naval exercises in the Baltic Sea.