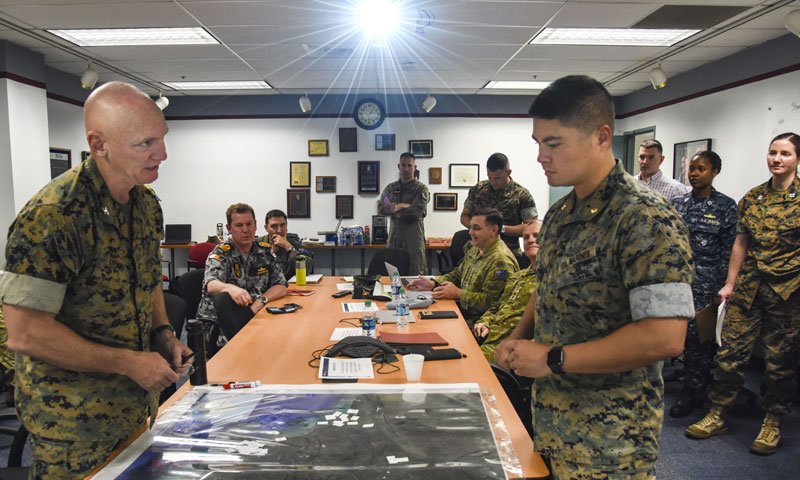 The U.S. stands at the brink of war with a peer adversary, and Navy and Marine Corps leaders need to figure out how to best position our forces and interoperate with our allies in the Australian Defense Force (ADF) to answer the call.

Nearby, another team of military officers examines a future conventional conflict scenario with a focus on better understanding how the skills and capabilities of Marine Raiders can best be applied to the objective.

These are just two of several future scenarios, and to be sure, each comes with a host of questions to be answered. But that’s exactly the point of the Naval Postgraduate School‘s (NPS) ‘Wargaming Week,’ and these are the sorts of critical issues NPS students work through in rigorous detail during the annual activity organized by the NPS Wargaming Activity Hub.

Held twice a year in June and December, Wargaming Week is the culmination of an 11-week course in wargaming applications. Drawing on extensive research, sponsor interaction, and their own considerable military experience, the students designed, developed and executed eight different wargames in this latest iteration – classified and unclassified – to dive deep into a range of technical and conceptual aspects of these scenarios.

“NPS is unique in its ability to teach the technology, the tactics, the operations, the logistics, the policy and the strategy of Navy and Marine Corps operations,” Hughes added.

Although the eight wargame scenarios differed, they all took place in the INDO-PACOM AOR. In the Navy’s Small Combatant Flotilla wargame, Hughes himself took the helm as the blue forces commander tasked with delivering supplies from Guam to the area of operations.

“The scenario represented our response to a near-peer threat to prevent us from logistically sustaining the forces and Marine advanced bases that were in the first island chain,” he recalled. “[Marine Corps] Maj. Josh Faucett, who led the wargame’s organization and referee team, was superb in everything he did; it was a very useful exercise.”

The takeaway? The adversary’s commander performed with an effectiveness that was “a significant concern” to Hughes. But that’s the point: unlike automated computer simulations which might describe optimal performance, analytic wargames like these force participants to engage in a very human activity – decision-making – in the context of a complex and structured environment. Moreover, they allow players to make critical mistakes and learn from them.

“Wargaming is one of the most effective means available to offer senior leaders a glimpse of future conflict, however incomplete,” then-Deputy Secretary of Defense Bob Work and Gen. Paul Selva explained in a 2015 War on the Rocks article.

Wargames, they said, present an opportunity to test new ideas and explore the art of the possible. They help us imagine alternative ways of operating and envision new capabilities that may prove decisive on future battlefields.

NPS has excelled at bringing this capability to the Department of Defense (DOD) for over three decades.

Since the 1980s, mid-career military officers have applied their advanced education and research to honing their craft of wargaming, which they then bring with them to their follow-on commands. It’s not just academic, though: wargaming is clearly spelled out as a key component of the DOD Joint Planning process (Joint Publication 5-0).

“NPS is one of the very few institutions that has a robust wargaming education program to bring wargaming to the forefront and produce experienced wargaming practitioners that senior leadership can leverage,” said Dr. Jeff Appleget, Wargaming Activity Hub director and senior lecturer in the OR department.

“The great benefit of the wargaming course is it matches student teams with a DOD or defense partner sponsor who has a real-world problem,” he continued. “Their problems aren’t articulated in terms of ‘use this tool to solve this problem,’ but rather, ‘I have a difficult problem and help me understand how to solve it.’”

In the second week of the course, student teams are formed and matched with the sponsors who pose a question or issue they need answered, and it’s off to the races. For the next five weeks, the students learn about wargaming as they get hands-on experience designing the foundations of their sponsor’s wargame. After week six, the teams intensely focus on designing, playtesting, and redesigning their sponsor’s wargame to ensure it addresses the sponsor’s problem.

“The idea is that up until their fifth quarter, students have learned a lot of high-level techniques like mathematical programming and advanced statistics, but when they graduate they’re going to have to apply these tools in a military context,” Appleget explained. “The wargaming sponsors pose very fuzzy problems that are not clearly defined, and understanding and refining those problems is something students typically don’t practice when they’re learning to apply a specific tool such as linear programming.”

The process is win-win ... Sponsors receive critical input to inform key decision-making. And the students gain invaluable experience melding their military backgrounds and skill sets obtained at NPS into a specific challenge before returning to the operational world, where they will apply this knowledge as OR analysts.

For ADF Lt. Col. Andrew Middleton, Australian liaison officer to the U.S. Marine Corps and sponsor of the ADF-USMC interoperability wargame, the ability of Marines and Australians to work side-by-side is a paramount concern. The American and Australian militaries have a long history of working together, but the nuts and bolts of keeping this a practical reality down the line can be daunting ... Their different gear, weapons platforms and training are matched by differing cultures, even language in some context.

“We looked at one of our four primary focal areas in our bilateral service interoperability plan, our digital fires system, and I engaged with the students for a number of months,” he said.

“This enabled us to pull in the required subject matter experts from Australia and the Marine Corps to really tease out the interoperability problems and have robust discussions to identify capability gaps and risks that we can take back to our respective services and ensure that we can rectify those through future acquisitions, training and exchange programs,” Middleton continued. “[The wargame] was very well executed and achieved the outcomes that we desired.”

Middleton is not alone in this assessment. Since the Wargaming Activity Hub was stood up in 2014 to meet a surge of interest in wargaming across the military, feedback from sponsors has been unequivocally “tremendous,” according to Appleget, with sponsors frequently requesting follow-on wargames with future classes.

“The sponsors are impressed with the quality of the wargames because they rival wargames that their commands have paid money for from other folks,” he said. “They’re typically amazed by the amount of information they get out of a game; that NPS students can come up with such a great quality product.”

Marine Corps Cpt. Thomas McKavitt, an operations research student who worked with Middleton on the interoperability problem set, said the experience better prepared him to work with Australian forces down the road.

“Never having worked with Australians before, the most interesting thing I learned during this wargame is how similar the ADF and Marine Corps are,” he noted. “Working with our Australian counterparts was extremely similar to working with Marines. We have a very similar culture; we’re both small services and take pride in our ability to face any problem and overcome it.

“Additionally, we were able to find common ground to work towards sustainable solutions,” McKavitt added. “If we ever are required to conduct operations together, we’re well-prepared and ready to execute.”