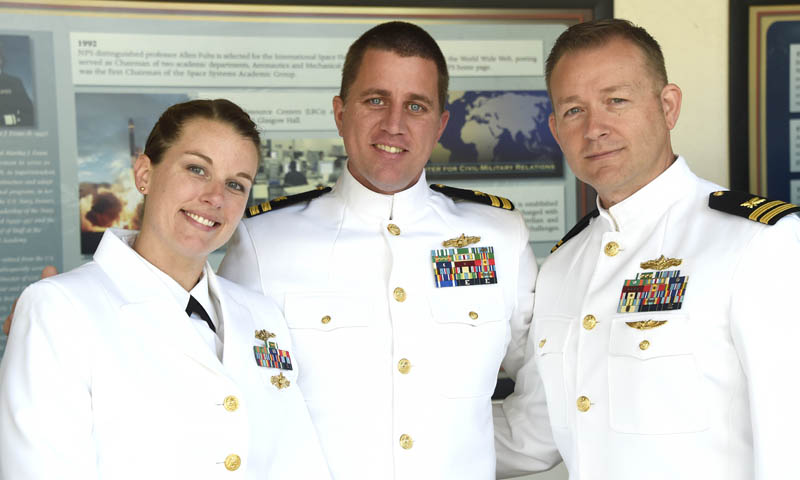 NPS graduate Lt. Cmdr. Krysten Ellis, left, is pictured with fellow Graduate School of Business and Public Policy graduates Lt. Christopher Schrader, center, and Lt. Nathan Woodward, left, during graduation ceremonies in June. A pioneering submariner herself, Ellis co-authored a report detailing the experiences of the first 24 female officers to deploy on board a Navy submarine.

On April 29, 2010 Navy Secretary Ray Mabus and then Chief of Naval Operations (CNO) Adm. Gary Roughead moved forward with an ambitious plan to integrate female officers on submarines and other naval vessels. Nearly a year later, the CNO issued a naval instruction permitting Navy detailers to assign female officers to a wide-array of surface vessels and designated submarines.

“Women will be permanently assigned to all ships, designated submarines, all afloat staffs, all units of the Naval Construction Force, all Riverine headquarter staffs, and all aviation squadrons regardless of mission, and will be fully integrated into the units to which they are assigned, without a separate chain of command,” read OPNAV Instruction 1300.17B.

With regard to the ‘Silent Service,’ what the instruction paved the way for was the placement of 24 hand-picked women, a mixture of supply and nuclear-trained officers, to serve on submarines beside their male counterparts for the first time in U.S. naval history.

For Lt. Cmdr. Krysten Ellis, a 2015 graduate of the Naval Postgraduate School (NPS), the opportunity fulfilled a lifelong dream.

“My dad was a career submariner. I grew up around boats my whole life, they were my jungle gym and I wrote papers in high school about why women should serve on them. It was a childhood dream of mine, and it seems to have just happened magically,” said Ellis.

Her experience proved to be a powerful one indeed, compelling her along with fellow submariner Lt. Garold Munson, to chronicle the experiences of those ground-breaking 24 Sailors in a professional report for their NPS Master of Business Administration degrees titled, “Gender Integration on U.S. Navy Submarines: Views of the First Wave.”

“We wrote the thesis because we wanted for there to be somewhere that the submarine force could go to hear the actual experiences [of female submariners] without a filter. I wanted our leaders to be able to understand that integration was not that big of a deal,” explained Ellis.

“The major goals of this study were twofold … to create a rich data set capturing the lived experiences of the first group of female submariners for follow-on studies, and to provide an analysis of the data that will address the main research questions,” she continued.

Ellis and Munson’s report is an ethnography, drawing upon the “lived experiences” of the women that agreed to participate in it. They interviewed 25 female submariners for their thesis, 16 of which were from the initial group of 24 female officers to serve aboard a submarine. Their comments, offered without attribution, share keen insight into the experiences of the integration and its supporting and hindering factors. Throughout the interview process, several themes emerged … Female submariners often spoke of the difficulties associated with their initial integration, the command climate aboard the submarines they served on, and a common desire to be treated as equals.

“When we came to the submarines, the crews were, one, scared ...  that women were coming, and two, very highly trained as to what was proper and what was appropriate, and what was not,” noted one of the respondents.

“There was no animosity. It wasn’t combative at all. It was really awkward because they just didn’t know how to talk to me,” wrote another.

Ellis offered her own views on the initial transition.

“The transition was not as painful as it was imagined. People thought it was going to be this awful, horrible thing. But, once you put a face to the monster that is change, it’s not a monster any more. It just becomes part of your routine. It took a week or two for the guys on the boat to figure out that I wasn’t a monster, but after that, we were sharing the bathroom on the boat like brothers and sisters. It wasn’t a big deal,” she said.

“Typically, whenever a new officer comes on board, there is some trepidation as we wait to see how they will integrate with the group. With the women who came on board, we probably stepped a little softer. It probably took a little longer for people to relax and be themselves in front of the female officers,” said Smith.

But despite the initial adjustment period, Smith feels that a lot of the concern about women aboard submarines was, “much ado about nothing.” 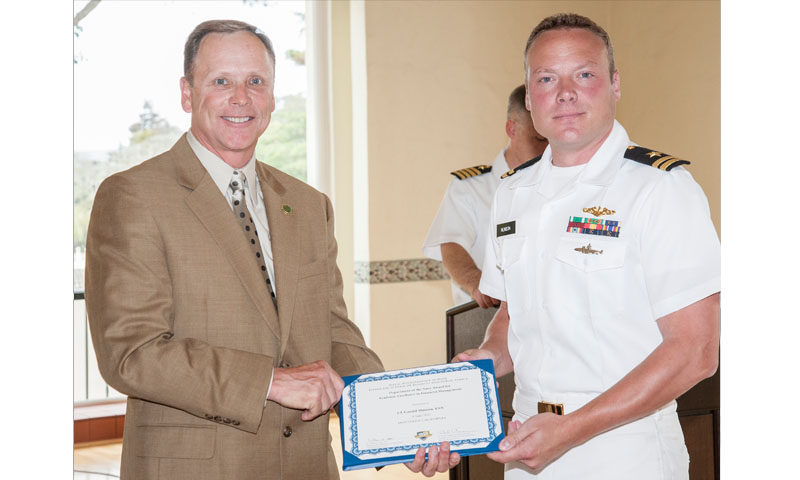 Lt. Garold Munson, right, receives the Department of the Navy Award for Academic Excellence in Financial Management during the Spring Quarter Student Awards Ceremony, June 9, 2015. A past winner of the Junior Submariner of the Year award, Munson and classmate Lt. Cmdr. Krysten Ellis co-wrote a detailed report on the initial experiences of the first 24 female officers integrated into the submarine force for their NPS Master of Business Administration degrees.

Another prominent theme throughout Ellis and Munson’s report was the desire for equal treatment by the new submariners. Several of the women who participated in the study noted a disconnect between the stated goal of equality, and the side effects of simply being the first females on board, and the notoriety that came with it.

“I am an expert in supply related topics because I am a supply officer. I am not a subject matter expert on women. I didn't sign up for that,” said one of the respondents. “I was supposed to be a mentor for the junior women, but I ended up being a mentor for the rest of the boat.”

“Getting my dolphins. That was … a very bittersweet day. I did it pretty quickly in comparison to most of the [junior officers] on my boat. I probably worked myself a little bit harder than I should have to get them in the time that I did. Then having like such a huge press release with it where CNN and Fox News and everybody was there. I just wanted to be normal and I just wanted to be one of the guys,” said another.

Even an honor as high as meeting the President of United States was dual-sided sword for some of the Sailors. “That’s kind of hard to explain to your guys, like oh well, I am just a normal JO [junior officer]. That’s what we have been preaching for the last you know, X amount, and that’s how you are expecting me, but now I am going to visit the president,” one of Sailors said.

In the end, Ellis and Munson’s report noted that command climate and leadership, particularly the tone set by senior leaders, was a critical factor for success.

“It is readily apparent from the experiences of the participants how important good command climate was to the success of the integration process, and, at the same time, how destructive poor leadership could be,” said Ellis. “Some people deal with change very well, others do not.”

“Command climate must be driven from the top and fostered at every level of leadership. Of all the factors that contributed to the quality of the integration experience, leadership and climate likely have the largest effect, and this effect is lasting,” added Munson.

Comments about command climate made by submariners interviewed for Ellis and Munson’s thesis were revealing.

“I think [command climate] is the key for the leadership … It has to be managed on an individual leadership level … the CO [commanding officer] CO, the COBs [chiefs of the boat], the XO [executive officers], and the department heads setting the right tone,” said one of female submariners.

“My captain - I mean he’s a good CO, but he definitely let things happen in the wardroom that I don’t think should have been happening … the environment that he’s allowing to happen, I did not agree with it at all.”

“My first CO was really great. My second CO also really great, but less strict about behavior and things definitely started to deteriorate.”

Ellis, as both a documenter of the women’s experiences as well as a participant in the process, has come to be believe that integration will require more than welcoming crews, responsive commanders and equal treatment. She notes that if women are to serve as career line officers within the submarine fleet, that serious changes will have to be made to accommodate female submariner career paths.

“You will not really be able to integrate unless you have thought out six or seven years of someone’s career. Out of the [24] women in the first group, only two are going to go back to a boat. It is not necessarily due to bad experiences or because of the command climate, it’s because the career paths that work for a man do not necessarily work for a woman,” explained Ellis.

Perhaps the largest career consideration that Ellis believes the Navy must address is the issue of the motherhood.

“The Navy needs to figure out when it is a good time for a woman to start a family as a submarine officer, they haven’t figured that out yet. It has to get worked into a female Sailor’s career path if they want a woman to one day command a submarine.

“Right now, the Navy needs women more than women need the Navy, and if you force them to choose between the Navy and a family, nine out of 10 times they are going to pick their family,” said Ellis.