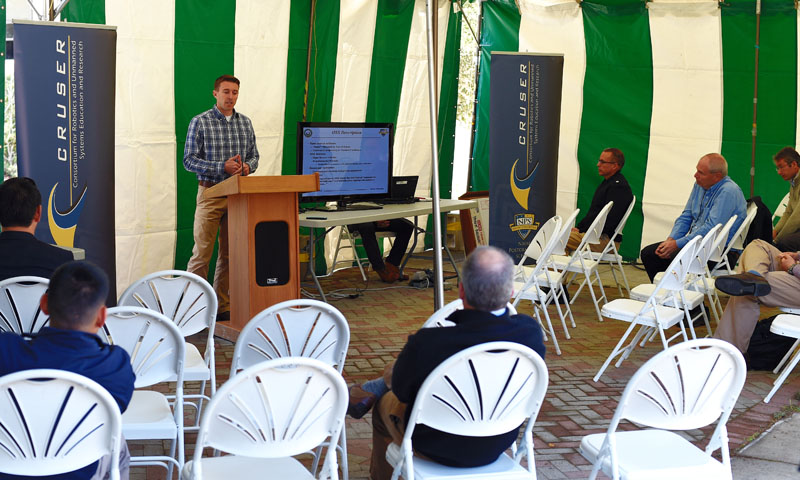 Naval Postgraduate School (NPS) systems engineering student U.S. Navy Lt. David J. Cummings is studying the viability of open source software for use across the Department of Defense (DOD) with unmanned aerial systems. He presented his efforts to students, faculty and staff during the Consortium for Robotics and Unmanned Systems Education and Researches (CRUSER) 4th annual Technical Continuum (TechCon) on the university campus, April 8.

Cummings was one of 29 presenters tasked with explaining their thesis or project to the NPS community. His thesis, titled “Viability of Open Source Software in Department of Defense Unmanned Aerial Systems,” details his analysis on the risks and advantages of open source software (OSS) to advance current UAV technologies.

“The cool thing about working in the Advanced Robotic Systems Engineering Laboratory (ARSENL) is that they have selected almost exclusively open source software to run the ‘Swarm’ project,” said Cummings. “Which is pretty cool and serves as a testament to the capabilities of OSS.”

CRUSERS’ Swarm unmanned aerial systems (UAS) project was developed to create a low cost countermeasure system of drones that can be used to detect, disrupt, disable and neutralize enemy UAS’ in a swarming scenario.

“All of the developmental software behind that program can be and is OSS,” said Cummings. “The scope of my thesis is to show that open source software is a viable alternative.” While Cummings is an advocate for OSS, he is not blinded to the fact that many in the DOD are still hesitant to adopt the development platform.

“The term ‘open source’ is generally understood as free, but not always,” he explains. “Open source just means that the source code can be seen.

“[The perception is] if you can view the source code then what’s stopping our enemies from copying it and designing it exactly like our design … using it against us,” Cummings continued.

“The creative potential of OSS is typically really high because you have a wide range of developers working on the same project, sharing the code,” he added. “And development speed goes hand-in-hand with that because having many eyes on the code means there is less of a chance for bugs and vulnerabilities from entering into the system.

“Upfront cost is usually really low for these types of projects,” Cummings continued. “OSS projects are also adjustable, because if the project isn’t coming along like it should then the resources can be reallocated into something else.”

Disadvantages of OSS fall into categories such as stability, developer support, and of course, the integrity of the UAV control software.

“Say the flight control software on the UAV is open source, the enemy discovers its open source and tries to attack the software by obtaining the development software [code],” said Cummings. “He then puts a guy into the open source development community for that UAV. The guy then writes code with the end goal of bringing down said UAV.”

The real world analogy of Cummings’ research occurred in 2011, when control of an RQ-170 Sentinel UAV was taken over by Iranian armed forces cyber warfare team, and landed in Kashmar, Iran.

“And the RQ-170 is not an open source drone,” Cummings noted.

CRUSER’s annual Technical Continuum, or TechCon, provides NPS students with an opportunity to inform the campus of their research through a series of briefing and presentations over two days. Created in 2011 at the direction of then Under Secretary of the Navy, the Honorable Robert O. Work, CRUSER advances SECNAV Unmanned Systems Goals through education, research, concept generation and experimentation.