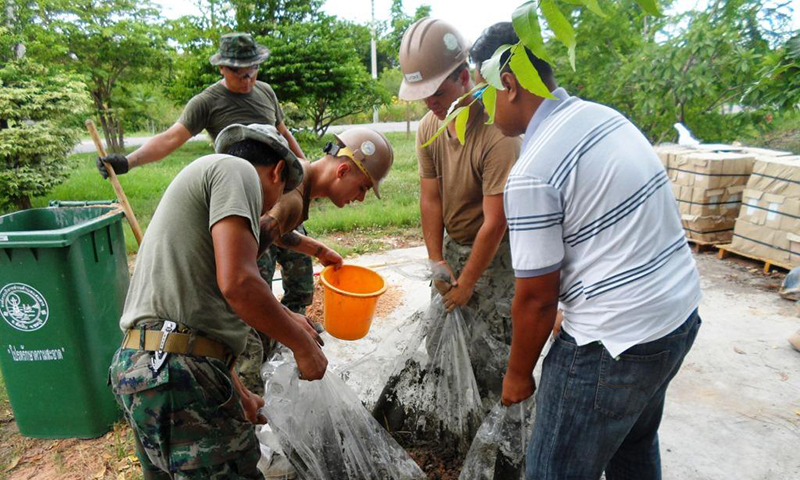 The invention has roots in the Southern Philippines, but it culminated in Cummings’ NPS thesis titled, “Explosive Remnants of War – Collection Points in Stability Operations,” which provided proof-of-concept for his technique.

The motivation to remove ERW from the battlefield and former combat zones may have never been higher. ERW are a primary component in the construction of improvised explosive devices (IED), and according to a report to congress by the Joint IED Defeat Organization (JIEDDO), IEDs have proven to be the number one threat to coalition forces in Iraq and Afghanistan.

“IEDs are the enemy’s equivalent of artillery, and artillery has always been the largest killer on the battlefield,” noted retired Army Gen. Montgomery C. Meigs in the report.

In addition to their potential application in IEDs, Cummings also acknowledges that ERW pose a safety risk to civilian populations who may inadvertently stumble upon them and cause them to detonate. With affected populations in mind, Cummings strove to develop a solution that was locally sustainable and affordable, and that could be used by local populations long after conflicts end and coalition forces return home.

“In most cases, neither localized disposal capacity, nor safe and secure storage solutions exist. As a result, ERW remain a threat and hindrance to stabilization even after being discovered or collected,” said Cummings.

Cummings’ invention is not the first to attempt to rid active and former battle zones of explosive ordinance, but he feels that his work fills a needed gap in global attempts to protect vulnerable populations.

“In spite of the many robust ERW and landmine awareness education programs and disposal efforts, there remains a glaring capabilities gap in global ERW management,” said Cummings. “Finding ERW is not the principal problem affecting stability, safely removing and disposing of ERW in a timely manner is.” 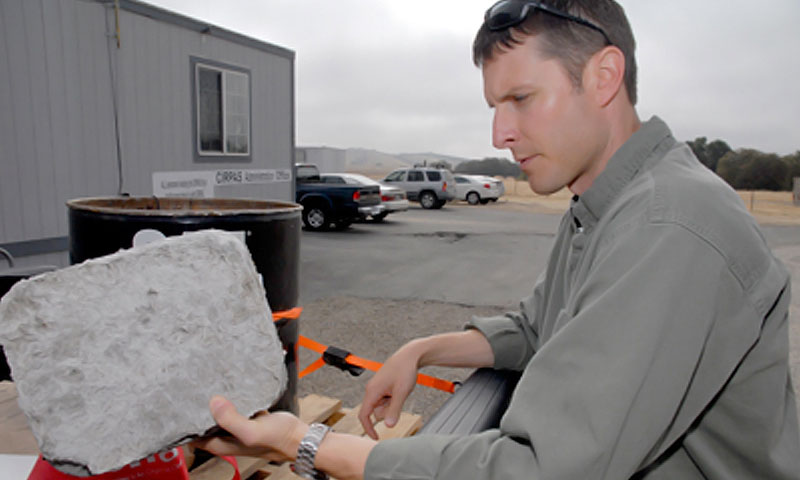 Former NPS student Lt. Deward Cummings holds a piece of lightweight, fibrous concrete while conducting thesis research into an explosive containment technique that contributed to a patent awarded Jan. 12. Cummings hopes his invention will allow people in conflict zones to mitigate the effects of the Explosive Remnants of War (ERW).

To that end, Cummings’ invention calls for the creation of relatively simple collection points for artillery shells and other ERW. His technique has been demonstrated to provide safe and secure temporary storage of ERW at the local level in a manner that is reproducible by the people most affected by ERWs.

“The only thing that we provide is the knowledge of how to a build an explosive collection point using this technique,” said Cummings. “It’s the old teach a man to fish analogy.”

While developing the storage technique, Cummings strove for a solution that was locally sustainable, affordable, and which relied solely upon local materials. We did not want to create a solution that is dependent upon outside resources, Cummings explained.

“If a solution is locally sourced, locally built, and locally maintained, all we need to do is provide the initial set up. In Afghanistan, they have mud walls that have been around for hundreds of years, so when in Afghanistan, we use mud. In the jungles of Malaysia, we may utilize bamboo. You build what you can with what you have, but if you get the general design of the structure right, it will do its job,” said Cummings.

The structure, despite the materials used, is cylindrical in shape allowing explosive forces to move upward rather than outward. While many different materials can be used, Cummings found that tires stacked three to four high and reinforced with fibrous material mixed with concrete were both ideal and readily available around the world.

To be succesful, ERW within the containment point must not be touching and can be no larger than 4-6 inches in diameter. Additionally, the unit must be properly marked and set apart from areas frequented by the local population.

Experiments in the field and at Lawrence Livermore National Laboratory have demonstrated the effectiveness of the technique, but Cummings stresses that the containment units he advocates cannot be certified. They are a mitigation technique and are not designed to contain large explosives into perpetuity. And while Cummings is very proud of his patent, he insists that he sought to patent his technique to keep it open source and available to the public and not to profit from it personally.

“We didn't patent it to protect the design for our use, we patented it to ensure that it will remain open source for everyone to use,” he stressed.

Cummings has moved on, but the work he did at NPS continues to gain traction. At a recent innovation workshop sponsored by the Naval Warfare Development Command and Old Dominion University, Cummings was named the “Technical Innovation Presentation Winner” after showcasing his invention.