Student Warrior Diplomats Take Professional Development Into Their Own Hands

Student Warrior Diplomats Take Professional Development Into Their Own Hands 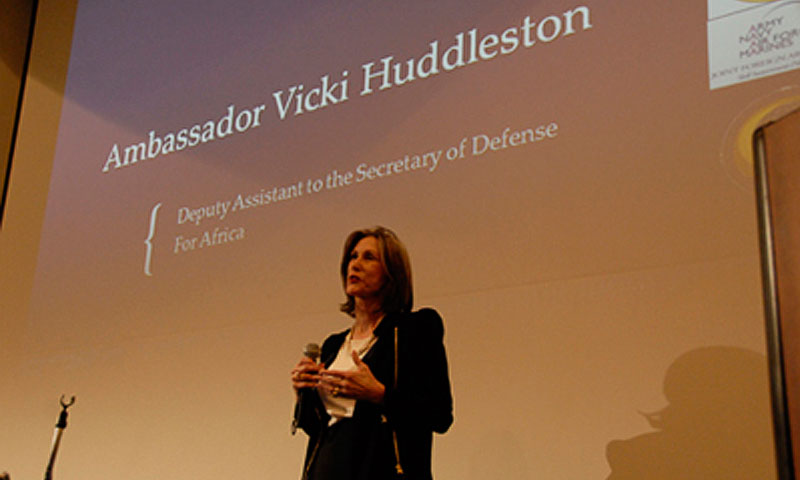 Deputy Assistant to the Secretary of Defense for Africa, Ambassador Vicki Huddleston, speaks to members of the Foreign Area Officer Association of Monterey on the challenges diplomats face in today’s African conflicts.

The FAOAM is an organization composed predominantly of students from all services attending the Naval Postgraduate School or the Defense Language Institute. Its purpose is to connect FAOs and others who have an interest in politico-military affairs. They hold monthly meetings and organize different events such as this conference to support the local FAO community.

The panels and lectures focused on topics such as diplomacy, language, regions, education and military issues.

In his opening remarks before one of these panels, NPS Executive Vice President and Provost, Dr. Leonard Ferrari, spoke of the important part FAOs play in diplomacy and the effect of their work on the fight with global terrorism and cooperation between nations.

“International engagement is something that the Naval Postgraduate School can support the Navy and the DoD with … looking at some of the difficult challenges we face today and given the globalization and the complexity of terrorism, I don’t think we can face them alone,” said Ferrari. “FAOs are the kind of folks that can make these things happen, by being stationed overseas and encouraging other nations to work with us.”

Diplomacy was one of the first topics of the conference with a panel composed of Ambassadors Richard Miles and Richard LeBaron, and retired Army Col. E. Michael Mensch. They touched on issues from the importance of promoting a positive and welcoming image of American institutions to maintaining a proactive warrior diplomat mentality while serving abroad.

The panelists spoke about how important it is for a FAO to adapt quickly to the local sensitivities and learning the local language but also the importance of their military background, an important aspect that makes them stand out.

“You, as members of the Defense Attaché Office (DAO), can relate to militaries in these countries in ways that civilians just can’t do,” said Miles. “That’s a very important asset that you bring to the team.”

The conference allowed Monterey FAOs the unique opportunity of attending a video teleconference (VTC) with one of the keynote speakers.

“This is a very important forum,” said Rear Adm. Jeffrey Lemmons, Director of International Engagement, of the conference. “The entire FAO community has long been recognized for its expertise and the great contributions that they make to develop connections and trust.”

Lemmons spoke about the career path of a Navy FAO and the increasing need for qualified FAOs, whose numbers the Navy hopes to increase to meet the demands of the community. He pointed out that Naval FAOs offer a unique perspective because of their experience at sea and their understanding of naval capabilities. “A professional naval FAO is going to add a dimension that will be useful and worthy in many posts.”

Also present as a keynote speaker was Deputy Assistant to the Secretary of Defense for Africa, Ambassador Vicki Huddleston, who spoke about the challenges diplomats face in today’s African conflicts. In particular, the situation in Libya.

“As FAOs, you play an integral part of our embassies around the world and in many ways the best part,” said Ambassador Huddleston. “I know that as warriors you’ll have the courage, as scholars you’ll have the wisdom and as diplomats you’ll have the grace to face up to the challenges you will face as you continue with your career.”