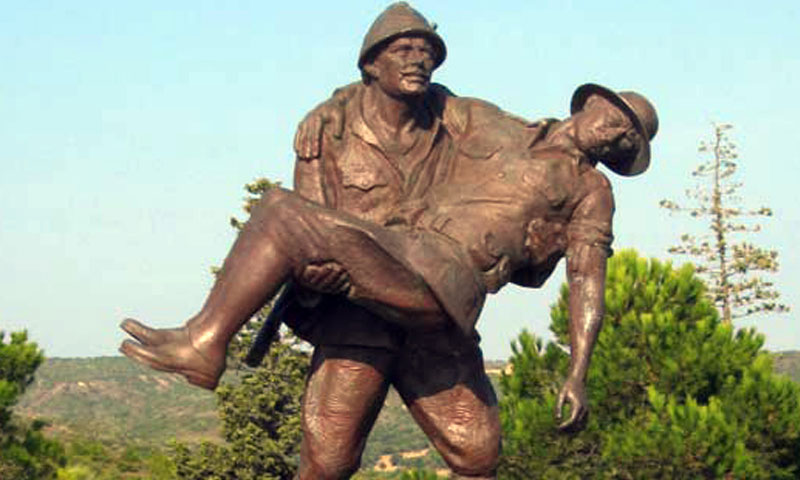 An iconic symbol of this “ANZAC Legend” stands at the Gallipoli memorial today – a statue of a Turkish soldier carrying a wounded Australian fighter to safety.

It was one of bloodiest battles of the First World War. The fight for Turkey’s Gallipoli Peninsula pitted thousands of volunteer Australian and New Zealand Army Corps (ANZAC) soldiers against the German-allied Turks in months of close trench warfare as the battle to capture Turkey’s capital and open the way to the Black Sea raged.

But Gallipoli was more than just a battle for the Black Sea. Although called to battle by their British allies, Australia was a youthful nation whose soldiers fought for much more than an allied nation – they fought for their country’s recognition as a new global player. And the Turks fought for more than just their allies as well … They fought to protect their families and their homeland, and to make one final stand as the Ottoman Empire was nearing collapse.

The result was a brutal, eight-month-long clash where thousands of young men lost their lives on both sides. But there was another, more lasting result -- a strange but strong mutual bond among these ordinary soldiers, who recognized and honored each other’s courage as they fought on as bitter enemies.

There are countless stories of how this special bond developed between the ANZAC and Turkish soldiers – of food and cigarettes tossed from one soldier to another across the lines of battle and into the enemy’s trench.

But one such story stands above the rest, encapsulating the depth of the respect for the opposing side. It’s of an ANZAC soldier who was shot as he ran out of his trench and lay bleeding, defenseless. During the tense standoff, a Turkish soldier tied a white piece of cloth to his rifle and raised it high as he ran out of his trench toward the fallen Australian. Guns on both sides fell silent, as the Turk carried him back to the safety of his comrades. An iconic symbol of this “ANZAC Legend” stands at the Gallipoli memorial today – a statue of a Turkish soldier carrying a wounded Australian fighter to safety.

To this day, the bridge that was forged between both sides of one of the longest and bloodiest battles in history remains strong, and is the bridge over which two Naval Postgraduate School students from the former World War I enemies have formed a lifelong friendship.

Almost a century after the Battle of Gallipoli, Turkish Navy Lt. j.g. Omur “Oz” Ozdemir and Royal Australian Navy Lt. Cmdr. Lincoln Trainor felt an instant rapport when they discovered they were from the two countries whose mutual sacrifice has evolved into a special national relationship.

“Gallipoli was a unique battle – the only one fought between our countries –and that has forged a strong and abiding relationship between us,” said Trainor, who received a master’s degree in physical oceanography with distinction. “In war, it brought us together as enemies, but now we consider our nations as brothers. So the moment I met Oz on the first day of our course on American Institutions and learned he was from Turkey, it instantly felt as if we were brothers.” 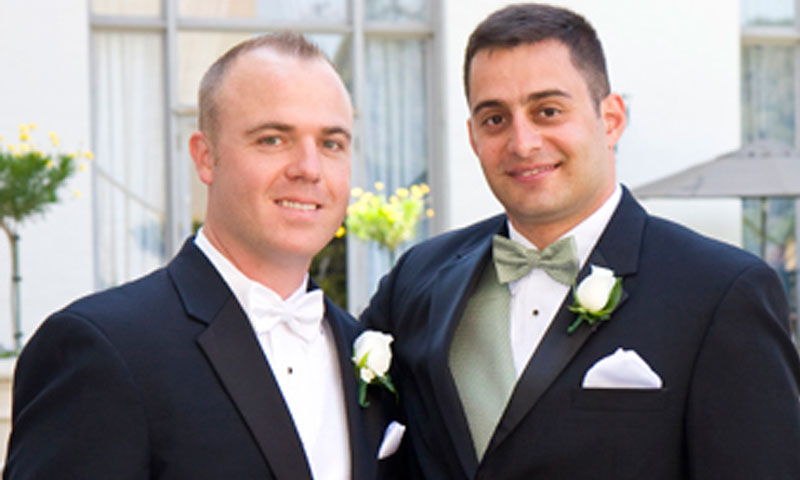 Almost a century after the Battle of Gallipoli, Turkish Navy Lt. j.g. Omur “Oz” Ozdemir and Royal Australian Navy Lt. Cmdr. Lincoln Trainor felt an instant rapport when they discovered they were from the two countries whose mutual sacrifice has evolved into a special national relationship.

“Since the 1930s, thousands of Australians and New Zealanders have come to Gallipoli to pay homage not just to their own war dead, but also to the brave Turkish solders who paid the ultimate price bravely defending their homeland,” said Oz, who earned a master’s degree in operations research.

In addition to the special relationship between the two countries forged at Gallipoli, ANZAC Day, April 25, is also Australia’s National Day, marking the country’s first major military action during “The Great War” that boosted the pride of the then only 14-year-old federal commonwealth eager to establish its reputation among the world’s nations.

“The creation of the ANZAC Legend has become an important part of the national identity of both countries that’s helped shape the way we both view our past and our future,” Trainor explained. “Eight thousand seven hundred and nine volunteer Australian soldiers – the ANZACs were the only volunteer force on either side in the war – were killed at Gallipoli out of a total of 28,150 casualties, but thousands of Turks also lost their lives. They, too, suffered terrible losses, so we pay tribute as well to the young Turks who so bravely defended their homeland.”

On ANZAC Day this year, Trainor was given the honor of representing his country at a special dawn commemoration service by the Oregon Army National Guard’s 41st Infantry Brigade Combat Team on the eve of their departure for Iraq, where he laid a wreath in memory of the fallen. The ceremony’s timing reflects the ANZACs’ original Gallipoli landing where they waded ashore under heavy fire just before dawn.

“What was most remarkable about the ceremony was an entire brigade of over 3,000 soldiers in battle fatigues marching down the hill at sunrise,” said Trainor. “I watched in awe as they formed up to pay their respects to those who had fallen in war.

“This was a great honor as the 41st Division fought side by side with the ANZACs in World War II,” he added. “I spoke about the special bond between Australia, New Zealand and the U.S., the strength of our alliance in the fight against terrorism, and the U.S. as our most important, indeed indispensable, defense relationship.”

Today, ANZAC Day has evolved into national commemorations of all those who lost their lives in wars fought by Australia and New Zealand.

The following day Trainor joined former Australian Prime Minister John Howard and other Australian dignitaries, as well as Turkish officers including his new friend Oz, for an official ANZAC Day ceremony at the former Presidio Army base in San Francisco. There, Oz resurrected the words of Turkey’s famous general and first president Mustafa Kemal Ataturk about those from both sides who fell at Gallipoli, whose native forces Ataturk commanded:

“Those heroes who shed their blood and lost their lives … You are now lying in the soil of a friendly country. Therefore rest in peace. There is no difference between the [Australian] Johnnies and [Turkish] Mehmets to us, where they lie here side by side in this country of ours. You, the mothers, who sent their sons from far away countries, wipe away your tears … After having lost their lives on this land, they have become our sons as well.”

In his ANZAC speech last year, Trainor’s words reflected the thoughts and emotions of ordinary soldiers: “Like many operations of the First World War, the Gallipoli operation, however brilliant in conception, was inadequately planned and inefficiently directed. It became the graveyard for the bodies of thousands of our best, our irreplaceable men. We commemorate today, therefore, no military triumph, but the more humbling triumph of human valor.”

Turkey, which forced the Allied forces to evacuate at the end of 1915, still celebrates the entire Gallipoli campaign.

But meeting his new best friend wasn’t Trainor’s only surprise while at NPS. He also met “the love of his life” in new wife, Dana, of Monterey.

In a scene from what reads like a fairy tale, Trainor proposed to his bride-to-be on bended knee at the Queen’s Table in the magnificent and historic Awhahnee Hotel grand dining room at Yosemite. In yet another serendipity, like so many sprinkled throughout his story, the title Queen’s Table was coined by NPS Director of Marketing and Communications Alan Richmond, who then worked for Yosemite during a visit by Queen Elizabeth, who shared the table with Prince Phillip.

“A few weeks before, I rang the Awhahnee and spoke to the concierge to make sure that everything would be perfect for the proposal,” Trainor recalled. “I asked for the best table for dinner in the Grand Ballroom, the Queen’s Table, which has a majestic view of Yosemite Falls, and arranged for a piano player to begin playing our favorite song, “The Glory of Love,” when the entrees were taken away. When the big moment came, what we didn’t know was that all the other guests in the Ballroom had been told what was about to happen, and everyone turned around to see us. When I pulled out the box with the ring, which was engraved to “My Glory of Love,” and Dana said “Yes!” the whole ballroom exploded in applause.”

The second happiest man at their June 7 wedding – some say he was beaming as much as the groom – was Trainor’s best man and new lifelong friend from the Turkish Navy, the only officer from his country to attend both the U.S. Naval Academy and NPS.

“The value of the Naval Postgraduate School is far more than a degree,” Trainor emphasized following his and Oz’s graduation. “This is a world-class academic program that allows the nations’ future military leaders to forge long-term relationships and friendships. While here, I’ve been doubly blessed to find my life partner and now beautiful wife, as well as a lifetime friend. It can’t get better than that.”

“Being at NPS is about our future -- where circles of influence will merge,” Oz said. “One of our former chief of naval operations came here, and so many of our officers have come here and gone back with a wider perspective and changed the Turkish Navy. And it all starts here, at NPS.”

“What’s equally important,” he added, “I’ve met a true best friend. Lincoln’s taken what I thought friendship was to a whole new level.”

“We’re already planning when and where to meet again,” Trainor noted. “I really want to go to Gallipoli, which is now a huge open-air museum, and Oz will be our guide.”

“And I want to attend the ANZAC Day commemorations in Australia,” said Oz. “Who knows,” he beamed. “Maybe there will be another wedding -- and this time Lincoln can be the best man.”