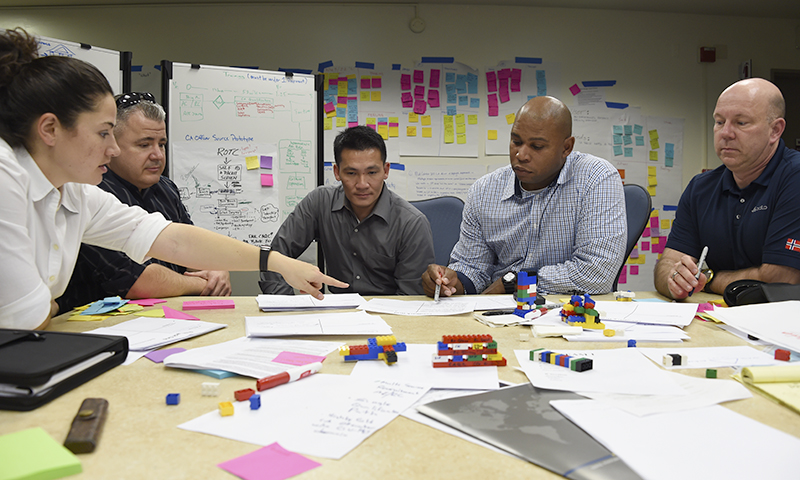 “We realized there were inherit challenges but we wanted to do our part to make the CA community better than when we came into it,” explained Hayes. “Something had to be done to move us forward as a community.”

Design thinking is a process of problem solving that focuses on the ‘human in the loop.’ It relies on interdisciplinary expertise and encourages rapid, rough prototypes with end-user feedback and involvement. The key is to embed the problem in context to understand how people who live with the problem experience it, rather than rely on those far from the problem to define and solve it.

For their workshop to be successful, Hayes and Nguyen quickly realized the first phase in the design thinking process, discovery, required them to reach out to leadership and colleagues within the CA community. “We went out and gathered different perspectives from community stakeholders about the problems they faced,” Nguyen explained. “Traditionally, military personnel rush into framing the problem without completely understanding it. So going through this process, we learned about the community from as many different perspectives as possible.”

Problem framing, the second phase, emerged from the discovery step. In processing their information, it became apparent that the CA community had no common identity. There was little agreement across the community on who they are, what they do, how they do it and why they do it.

Roberts, a Professor in the NPS Department of Defense Analysis, served as the facilitator of the CA workshop, as Hayes and Nguyen’s thesis advisor. She describes one of the challenges for the CA community as “the divorce of 2006” when the community was split into different commands. The structural change separated them to the point they had no common identity.

“They no longer saw themselves as one community,” Roberts said.

Ideation, the third phase of design thinking, had participants brainstorming new ideas they wanted to include in an identity statement.

“We began to distill what is core, what is distinguishable, and what is unique that can be enduring about our community,” said Hayes. “Those are the building blocks that we used to craft the identity statement.”

Prototyping, the fourth phase, asked participants to brainstorm different ways to ensure their identity would become a reality in 2025. They produced prototypes on branding, training, professionalization of the community, and organizational structure.

The final phase, testing, incorporated feedback from members of the NPS community.

“We keep using feedback during the testing phase to build better prototypes,” said Nguyen. “The work that we have done here, and the work that we will continue to do, is just the beginning of the collaborative effort by the CA community to make the branch better.”

While their capstone project is still ongoing, Hayes and Nguyen are slated to present their work to major sponsors and CA leadership in April.

“The ultimate goal is to speak to our stakeholders about our capacity, our capabilities and how best to utilize us,” said Hayes. “There is competition emerging in the CA field. We will remain relevant by convincing others that we are the best experts in the human domain.”

As co-founder and a former co-director of the Common Operational Research Environment Lab, Roberts is no stranger to innovation. She believes that design thinking has a major role to play in the CA community’s future.

“If you think about what CA does when it goes in country, design thinking is perfect for their type of problem solving,” said Roberts. “CA soldiers have to understand complex social, political and economic dynamics in order to be able to map the human terrain. Design thinking could aid them in this endeavor. Ideally, it could be taught in their community training centers so travel to NPS wouldn’t be necessary in the future.”

Roberts brought the five-step design thinking process to NPS and initially taught it in her Wicked Problems course … Subsequently, she has been teaching design thinking courses throughout the NPS campus. She also believes that design thinking is a perfect fit for an applied research and teaching institution like NPS.

“I have participated in design thinking efforts in the School of Engineering and Applied Sciences, and the School of Operational and Information Sciences. From my perspective it does not make any difference what your discipline is… design thinking is well suited for anyone who wants to be a creative, innovative problem solver,” said Roberts.