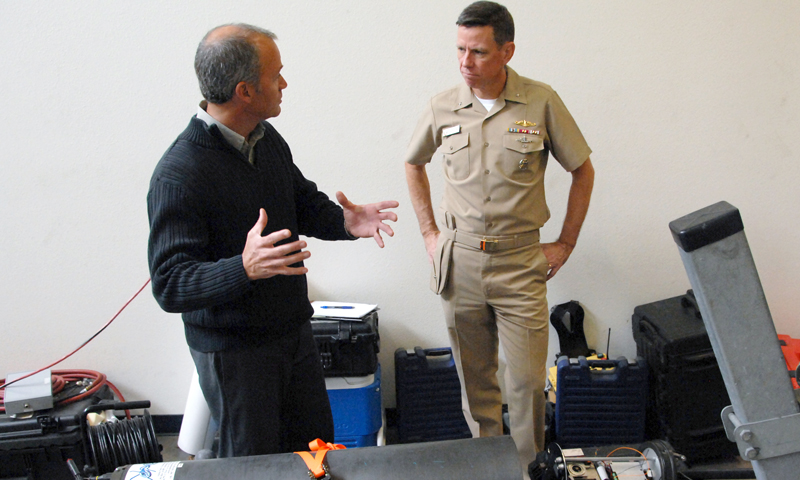 Commander, Submarine Group 2 (SUBGRU 2) returned to his alma mater, Aug. 1-3, to deliver remarks to Naval Postgraduate School (NPS) Undersea Warfare (USW) students, and to strengthen the bond between the university and the operational submarine community.

“For me, and in the undersea forces, we’re looking at a lot of new capabilities from the undersea domain and NPS is doing a lot of work in those fields,” noted Breckenridge during the visit. “If you’re not improving, you’re falling behind. We’re a Navy that is committed to constant improvement, and you only get that through education.”

Emphasizing the value NPS has to the operational fleet, he noted the partnership between the Navy and academia as a way to stay competitive in today’s complex environment.

“Our Navy is a high-edge, technological service. We operate complex warships with sophisticated payloads that require more than just rudimentary canon knowledge,” noted Breckenridge. “As we develop greater capabilities from the sea, we do so, really, by leveraging our academic institutions. We need to know what things are going on in academia so we can pace ourselves and make sure we exact the maximum benefit out of that.”

The visit also strengthened partnerships between researchers at NPS and the operational fleet by allowing Breckenridge to share his perspectives and expectations of academia from a fleet commander’s perspective.

“It’s a two-way street, and the Naval Postgraduate School epitomizes that relationship with the operational fleet,” Breckenridge said. “The harder challenge is for academia to know what the fleet is doing so that they are able to focus their fields of research to service to the fleet.

“This is an opportunity for me to describe my vision of where we’re going in the undersea domain from a warfighting perspective,” continued Breckenridge. “Also for me see what type of research work is happening here by the students of the Naval Postgraduate School.”

While touring the university’s autonomous systems laboratory, Breckenridge shared his experiences as a junior officer studying at the university, and reflected upon how graduate education improved his proficiencies as a submarine officer.

“I came to NPS after my junior officer tour on USS Hammerhead,” said Breckenridge. “I was involved with the underwater acoustics program at the time, and it really helped me both with regard to our sonar systems, and our algorithms as well as our signal processing. I was able to employ them better as an operator because of my experience here.”

As commander of SUBGRU 2, Breckenridge sees firsthand some of the technology he helped to develop and test while earning his master’s degree at NPS being used in operational submarines.

“My thesis involved wave front curvature with regard to passive ranging,” noted Breckenridge. “It’s a technology we now use on our Virginia and Seawolf class submarines with our wide aperture arrays. It’s great to see that this pioneering work has become one of the mainstay capabilities – from an acoustics perspective  – on our submarines.”

According to Lt. Scott Millhouse, an NPS student in mechanical engineering who attend Breckenridge’s lecture on undersea warfare strategy in the 21st century, the opportunity to talk undersea warfare with an operational commander was a fulfilling experience.

“His talk was excellent. He was very well informed, and brought a lot of credibility to what he presented on,” noted Millhouse. “His talks really brought together the big picture. He illustrated where the Navy is currently, and where the Navy is going. I was able to see the connection between my academic curriculum, and current and future naval applications.”

The Menneken Lecture series brings to NPS a wide spectrum of USW leaders and innovators from industry and the private sector to speak to the NPS students and faculty. These lectures serve as professional academic development for the students of the USW curriculum, and are coordinated and hosted by NPS Anti-Submarine Warfare and Mine Warfare Chairs, retired Rear Adm. Jerry Ellis and retired Rear Adm. Rick Williams.