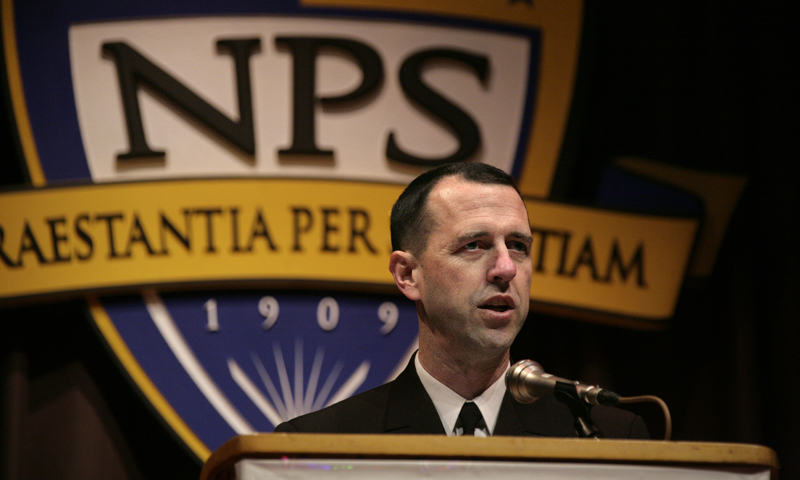 An increasingly diverse community of graduates, representing the Navy and all U.S. services, several nations, law enforcement and a large group of civilians, were joined by a packed house of family and friends in celebration of Winter Quarter graduation, Mar. 30 in King Auditorium.

Oliver would go to describe Richardson as a visionary leader who last year developed and promulgated a document entitled, “The Design for Undersea Warfare,” outlining a vision, strategy and plan for the future of our undersea forces. This design has been strongly endorsed by leadership and will play an important role in the future of our Navy, Oliver noted.

Vice Adm. Richardson opened his remarks by thanking the NPS community for the invitation to be guest speaker, and paid the graduating class a high compliment by noting that they "both individually and collectively represent a tremendous addition to the strategic arsenal of our nation.”

He commented that this was a milestone day for the Navy, this nation and many nations as the graduates complete their studies and return to their units, home countries and commands. NPS is not just any graduate school or academic institution, he added, but is the U.S. Navy’s graduate school … the students here are not focused on just any old issues, but rather on practical and detailed solutions to real problems that face our Navy and defense.

He stated, “You have had the chance to interact with one another from different warfare specialties within the Navy, different services across the Defense Department, and shared those experiences in your service histories, and as much as any joint professional military education course or war college, you have had the experience.”

The relationships that have been built will reach across warfighting domains as you return to operate and fight together, he added, emphasizing the strategic advantage of NPS’ international environment. Today’s global problems require very comprehensive approaches and solutions that bring their own elements of national and international power, he said.

He closed by remarking, “You have bonds of friendship and trust already in place that you forged here in Monterey … You became international strategic thinkers without even realizing it,” Richardson said. “Our nation needs you to rise and reach your strategic potential … Don’t forget what you learned here in class and by all means stay in touch and keep those strategic bonds strong.”

Following the graduation ceremony, distinguished guests and graduates alike transitioned to Herrmann Hall’s Barbara McNitt Ballroom for the graduation reception. Here, Richardson commented that he felt it was a privilege to be asked to be the graduation speaker. 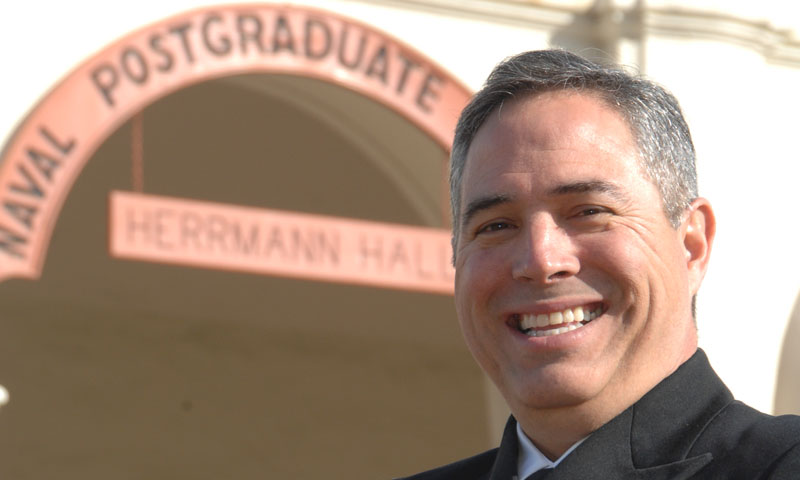 Navy Capt. Bryan S. Lopez, Executive Officer at Space and Naval Warfare Systems Center Pacific, was one of this quarter’s more senior graduates, receiving an Executive Master of Business Administration degree. It was actually his second degree from NPS, Lopez graduated a decade prior as a Lt. from the Electrical Engineering curriculum.

“When President Oliver asked me, I was completely thrilled,” he said. “Anytime I can be the speaker at a graduation ceremony here, I’ll take it.

“NPS itself is a strategic star in our constellation as a Navy and the combination of Navy students, students from other services and government agencies, and of course the international students, make this truly a special place,” he added.

As is the tradition every quarter, several key students were spotlighted for excellence through NPS’ various awards and honors. One of the most prestigious, the Monterey Council Navy League Award for Highest Academic Achievement, was presented to Navy Lt. Eric J. Blomberg.

“I am blown away by my selection for the Navy League award,” Blomberg said. “As a nuclear engineer in the Navy, the curriculum in the National Security Affairs department was well outside of what I have worked with and studied for the last 15 years, and I really enjoyed the experience … I will go back to the fleet as a more, well rounded officer,” he added.

“I am very honored to receive the Outstanding Academic Achievement Award for International Students. The award is a recognition of my hard work and effort put in over the past 18 months. I would like to thank the MAE (Mechanical and Aerospace Engineering) department for the award nomination.

“Receiving higher education at NPS was a very enriching experience. NPS provided the opportunities to work on real problems and issues related to military aspects,” he continued. “The opportunity to interact with U.S. students as well as other international students has widened my knowledge and network.” Tan added that he enjoyed the pace of life in Monterey, saying he would definitely miss it upon returning home to Singapore.

“I feel humbled to have been part of the experience, and to be able to come back and do this and be part of the Executive MBA, it is phenomenal,” he said.

Lopez was already familiar with NPS, graduating from the university as a Lt. a decade prior with a master’s degree in Electrical Engineering. He had high praise for the experience, noting that the Executive MBA was a perfect fit to the type of work he performs daily as the XO at a major Naval systems center.

“It’s all about operational procurement, money, manpower and cost schedule type of performance stuff … This will continue to help me with whatever I do in the rest of my career,” he said. “At this point in my career, I’m not sitting down there working with engineering design teams. You’re managing the big picture. It’s budget, money and manpower, and if there’s a follow on tour in Washington, that’s where most of us end up some day,” he remarked.

And in spite of the unique experience Lopez’ second time around at NPS provided, he admits the campus also brought back some old memories. “It is nostalgic to be here 10 years later, as I remember being here as a Lt. and standing outside Root Hall … standing here again, it is just like a flashback,” he added.

A total of 307 students graduated during the Winter quarter, earning 308 degrees. The graduating class was composed of 196 military, 81 civilians and 30 international students.