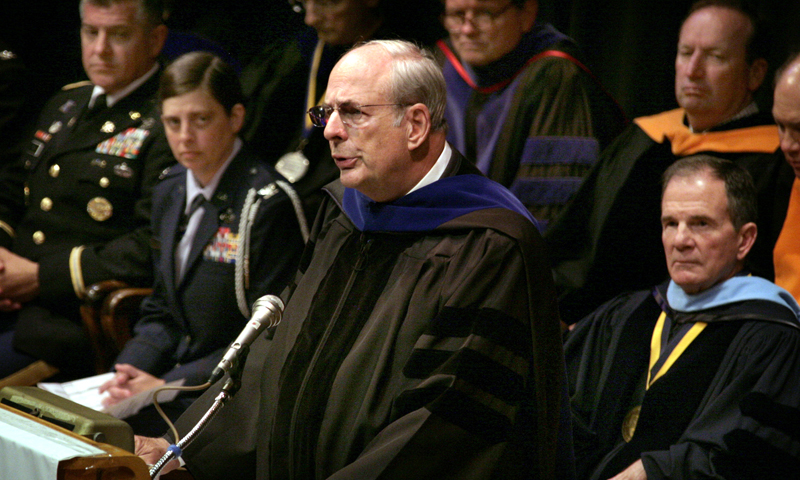 The Naval Postgraduate School (NPS) held its summer graduation ceremony to a packed auditorium of friends, family, faculty, and a large class of 377 graduates, in King Auditorium, Sept. 23.

And for only the third time in the university’s long 100-plus year history, NPS awarded an honorary doctorate of military science to keynote speaker, Norman R. Augustine.

The ceremony opened with NPS President Dan Oliver taking the opportunity to acknowledge the faculty and staff for their hard work in creating NPS’ challenging learning environment -- paramount to the quality of the students’ education. He also thanked the family members and friends of the graduates for their support, while recognizing the hard work each graduate endured during the their time at NPS.

“NPS graduates, you should be justly proud of what you have accomplished here,” said Oliver. “We are proud to call you NPS alumni and we look forward to hearing great things from you in the future.”

Oliver then proceeded to introduce the guest speaker and present him with the honorary degree.

“The power of an NPS education is its impact on our students’ and graduates’ effectiveness to lead.” Said Oliver. “Today we have the special honor of welcoming an iconic leader to our ranks as an NPS alumnus. He is a friend of the NPS whom I would proudly suggest to you or anyone else as a mentor.”

With the assistance of NPS Executive Vice President and Provost Dr. Leonard Ferrari and the Dean of the Graduate School of Operational and Information Sciences Dr. Peter Perdue, Oliver presented the honorary doctorate to Augustine, former Chairman and CEO of Lockheed Martin Corporation, just one position among a long list of leadership position in the public and private sectors.

“I am deeply honored to receive a degree from this great institution,” said Augustine in his speech. “I am acutely aware of the standard of excellence that you maintain and the demands placed upon each individual who is affiliated with the school.”

Augustine gave an interesting perspective on the reasons for the day’s celebration. He said that a graduation is commonly referred to as a “commencement,” or a beginning, not an ending. The focus for the graduates will be on what they next, he said, not what they have done in the past.

“You will be expected to be part of the answer to the problems now confronting our nation,” he emphasized.

Augustine noted that the U.S. had to learn to adapt to the challenges of today’s fighting environment. That even with the nation’s might in conventional warfare, enemies were shifting their tactics and that future leaders needed to adapt to this shift.

He mentioned the emergence of globalization and its implications and how critical effective leadership is in this new world.

He also added two important observations. He said that he was struck by how many of the leaders he met while participating in over 500 meetings of Fortune 100 companies who did not have abnormally high IQ’s or come from millionaire families. Rather, in his experience, the key characteristic they shared was motivation. “Motivation will beat mere talent almost every time.”

He noted the value in focusing on the present, in doing your best, right now, to prepare for the future. Augustine quoted Sir William Osler, who he noted is “recognized by many to the father of modern Western medicine” in saying “I have had … personal ideals. One is to do the day’s work well and not to bother about tomorrow … To it, more than to anything else, I owe whatever success I have had – to this power of settling down to the day’s work and trying to do it well to the best of one’s ability, and letting the future take care of itself.”

“In my experience, you exemplify the very best about America,” he said. “Speaking as a civilian, and as a private citizen, I thank each and every one of you for what you do for our country … May you always enjoy fair winds and following seas.”

After his address Augustine joined Oliver and Ferrari in presenting Distinguished Professor Awards to four NPS professors selected by their colleagues for the honorary title. A distinguished professor, noted Ferrari, is a senior professor that has been recognized as a role model among their colleagues, has given continued effective service to the NPS team, and has conducted work that has had significant impact in their fields.