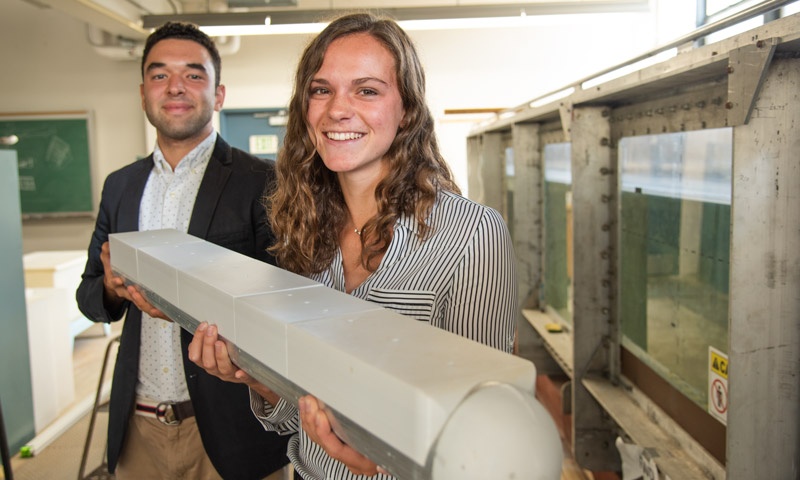 Two young interns are making some serious waves this summer at the Naval Postgraduate School (NPS).

The interns’ work, under the mentorship of systems engineering assistant professor Joseph Klamo, will be instrumental in optimizing the performance of autonomous underwater vehicles (AUVs), while providing the students with invaluable exposure to STEM research.

“A lot of the work we do benefits the development of young students who are potentially interested in science and engineering,” Klamo said. “I think experimentation is an exciting way to get people interested in, and hands-on experience, in the field.”

Collaborating with Dr. Young Kwon, distinguished professor in the Mechanical and Aerospace Engineering department, the group has spent the last several weeks collecting and analyzing data on AUV models to explore how an AUV near the surface will feel the effects of waves.

“We’re trying to understand the magnitude of those loads, what controls their severity in terms of wave heights and lengths, including the vehicle speed and geometry,” Klamo explained. “Once we understand these things, we can predict them and determine how to compensate for them to get better vehicle performance.”

This research experience will ripple throughout the students’ future careers.

Yeager, about to enter her final year at York School in Monterey, has set her course on STEM work in the U.S. military and is currently applying for Army and Air Force ROTC scholarships. She’s right at home in the field: since the third grade, Yeager has explored underwater robotics with her older brother and father as well as participating in her school’s robotics club.

Two years ago, Yeager’s brother undertook a similar internship at NPS, and as soon as she had the chance to intern through the Office of Naval Research (ONR) Science and Engineering Apprenticeship Program, she dove right in.

“It’s pretty rare to get an opportunity like this to work in such a professional environment, especially for a summer job,” Yeager said. “I’ve always been interested in engineering through my experience in robotics, and enjoyed STEM classes at school, so this internship really reinforces what I’ve learned.

“On top of that, being in a military environment is really, really helping me get a glimpse of what my life is going to be like in the military,” she continued. “Talking to all sorts of people in different branches and career paths has given me a lot of insight.”

Like Yeager, Cool possesses an innate drive towards STEM work. The Monterey area native, currently studying systems engineering at the University of Virginia, completed an internship at NPS in 2017 with the Defense Analysis department’s Global ECCO program, and was keen to work with Klamo this summer through the ONR Naval Research Enterprise Internship Program.

“I’ve learned a lot about research, how to collect and analyze data, and scientific theory and process,” Cool said. “It was surprising how relevant the internship is to what I’m studying at school.

“It’s definitely furthered my passion for entering the STEM field,” he added. “I love working with people on numbers and seeing that the information we’re collecting has an impact on the Navy: this kind of meaningful work is something I’d like to do when I grow up.”

The duo has made their mark on NPS as well.

“I would say it’s beyond my expectations,” Klamo said. “They are both very mature, dependable and accountable. It’s unbelievable the amount that they’ve been able to contribute and add to the previous work.”

The interns will soon depart NPS, Cool to resume his studies in Virginia and Yeager to apply for colleges and wrap up her senior year.

They are both quick, however, to praise their time at NPS working with Klamo.

“He’s the best mentor; he’s a total goofball and really fun to work with!” Yeager exclaimed. “But at the same time, he’s taught us so much in such a short period of time. He is very clear about his priorities and that what he really cares about is our learning experience and making sure that we’re getting out of this internship what we want to get out of it.”