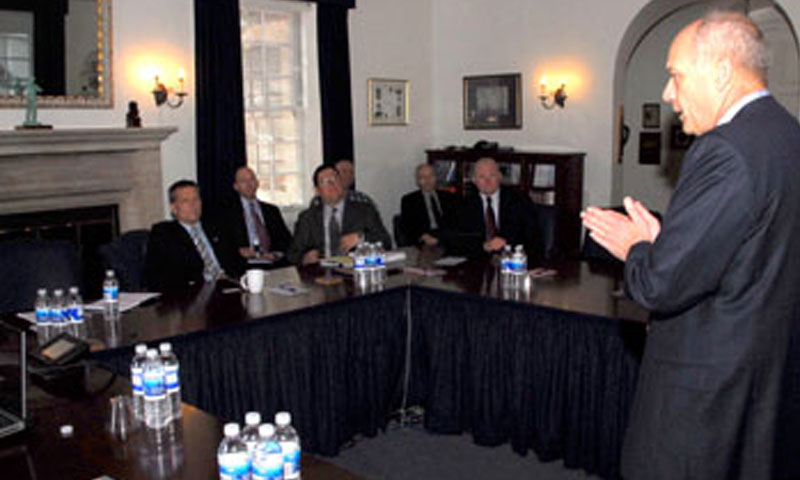 Rear Admiral (Ret.) Andy Singer, Naval Postgraduate School Inman Chair for Intelligence, gives a welcoming speech to a delegation of representatives from the Swedish International School (SWEDINT), the Swedish Folke Bernadotte Academy, the Swedish National Defense College, and the Swedish Armed Forces Research Agency, April 13. The group, led by Brigadier General Johan Svensson, director of the exercise VIKING 11, gathered to discuss the designation of NPS as a distribution site for the international exercise for April 2011.

In its role as the United States’ Partnership for Peace Training and Education Center (USPTC), the Naval Postgraduate School (NPS) hosted a high-level delegation from the Swedish Armed Forces in April. The purpose of the visit was to establish commitments for joint projects between NPS and the Swedish group as well as to facilitate a remote site survey in support of the USPTC’s participation in the civil-military exercise, VIKING 11, scheduled to take place in April 2011.

The VIKING exercise is one of the largest multinational, comprehensive approach exercises in the world bringing thousands of participants together from a multitude of nations and organizations and educational institutions from different parts of the world such as the USPTC.

“NPS is a recognized partner among global peacekeeping training and education efforts and is well known as a contributor to research and development that is closely linked to the VIKING concept,” said Brigadier General Johan Svensson, VIKING 11 Exercise Director. “Getting into the strategic comprehensive approach concept is on all agendas, and we think that NPS has a great network and concept that will bring VIKING forward.”

“In VIKING 11, NPS will provide the very first civilian remote site with a multinational training audience based at the San Mateo County Sheriff’s Department,” said Svensson. “This is unique and we just have to capture the moment and make sure we work together for a great outcome designing the exercise.”

Because of the nature of the exercise, VIKING 11 presents the opportunity to work in a multinational multifunctional environment with elements such as military, police and civilians from dozens of nations. Svensson believes that this is one of the key elements of the exercise.

“Anyone with experience of real operational challenges understands the importance to train and rehearse in a combined way prior to operations,” said Svensson. “In VIKING, the fact that every operation is multinational and multifunctional makes the exercise the perfect contributor.” 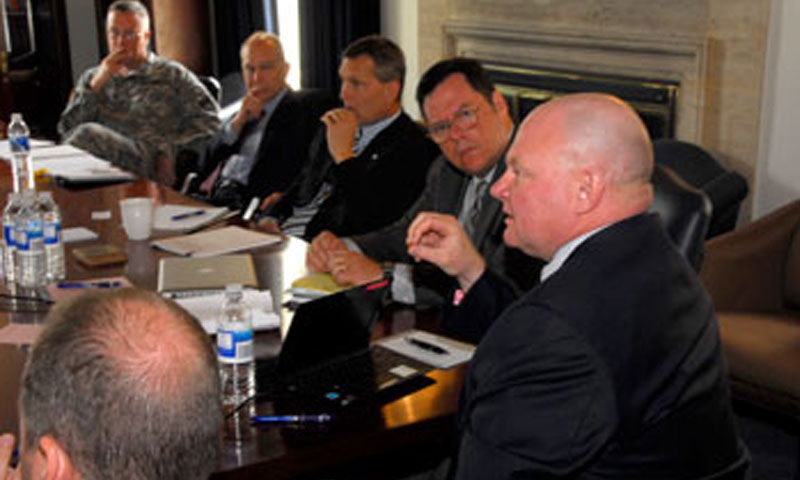 Members of a Swedish delegation lead by Brigadier General Johan Svensson, director of exercise VIKING 11 (third from far left) and consisting of representatives of the Swedish International School (SWEDINT), the Swedish Folke Bernadotte Academy, the Swedish National Defense College, and the Swedish Armed Forces Research Agency discuss the designation of NPS as a distribution site for the international exercise VIKING 11 scheduled for April 2011, April 13, 2010. The Swedish delegation traveled to multiple prospective distribution sites around the world for the civil-military exercise that evolves elements from the military, civilian and non-governmental organizations.

In spite of the challenges that such a diverse environment could produce, Svensson pointed out that diversity underlines the effectiveness and purpose of the exercise.

“VIKING’s effectiveness is in the combined efforts of making diverse nations and organizations better understand each other to better cooperate in peace operations together.”

The delegation headed by Svensson, consisted of representatives of the Swedish International School (SWEDINT), the Swedish Folke Bernadotte Academy, the Swedish National Defense College, and the Swedish Armed Forces Research Agency. During their visit they toured several sites that would participate in the exercise such as police stations, military installations and NPS.

NPS was designated as a USPTC in May of 2004 by the U.S. State Department to act as America’s contribution to NATO’s Education for Reform Initiative, Partnership for Peace Program (PfP), and the NATO Defense Institution Building efforts.